ATLANTA — The second season for Vanderbilt football under head coach Clark Lea is a little more than one month away.

The anticipation for that commencement differs from Lea’s debut one year ago in the sense that interest will be heightened to see how much different and improved the Commodores are compared to the team that took the field during his inaugural season. But not only does Lea expects his players to be better on the field, he has higher expectations for himself as well.

“One of the things that becomes a reality when you’re in this role is that your development begets team development. The better I am in my job, the better everyone else in the program can be in theirs, whether that’s anticipating problems, doing a better job of communicating effectively,” Lea said. “I think specifically where I want to be better is a cohesive strategy for each game where we’re looking at the complementary aspects of playing winning football and I’m doing everything I can to put the best competitive product on the field. That is my responsibility.

“Our goal is to play, fight and win each game. I need to be on top of it in terms of empowering all three phases to interlock and to become a force on Saturdays.”

Vandy’s first Saturday is Aug. 27 when the team faces Hawai’i at the Clarence T.C. Ching Athletics Complex in Honolulu. Preparation for that matchup will begin in earnest July 29 when the Commodores report for the start of fall camp. 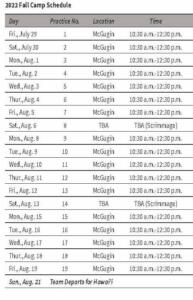 Along with offensive coordinator Joey Lynch and defensive coordinator Nick Howell, Lea and staff have been working since the 2021 season ended in November to strengthen and deepen a roster that had seen significant attrition since Lea’s arrival in December of 2020.

A large and much-heralded recruiting class will join a core of committed returnees and a handful of talented transfers looking to make its mark as Team 2. Lea believes the makeup of the ’22 squad is in a solid spot going into August.

“We’re on course. We want to stay on course. That means doubling down on our recruiting efforts and, also again, the development,” he said. “Retention of our roster becomes paramount. When you’re building a program you’re trying to compound interest with experience. We have to be attentive to maintaining systems and maintaining language and allowing guys to double down on their learning each year and that they’re invested here.

“We’re on course, but we have to stay on course and that’s a daily fight.”

Kicker Joseph Bulovas can’t be ignored as another important piece back for a second season with Lea and associate head coach and special teams coordinator Justin Lustig.

The Commodores will begin the campaign trying to snap a seven-game losing streak. When they travel to Alabama on Sept. 24 it will be looking to end a 21-game SEC skid.

“We don’t talk about that. We don’t spend time on it. We don’t tally up the collective records of our opponents. That’s just not who we are,” Lea said of those streaks. “We’re not fighting (just) to win an SEC game, we’re fighting to become a dominant force within the conference. Obviously winning in the SEC requires winning that first game. But when that happens, it’s not going to be a huge celebration. We’re going to celebrate everything at a high level, but we’re going to shift focus quickly to the next opponent because that’s what winning programs do.

“I don’t take ownership of anything that happened before. I certainly take ownership of last season. We fell way short of our expectations. But we are simply trying to build the best version of Vanderbilt football in year two independent of our opponents. We think if we can reach that level of championship performance within this team, that replicated over time we’re going to have a lot of success. That’s our focus. That will continue to be our focus.”

Vandy will face a Hawai’i team that finished the 2021 season strong by winning its final two regular season games to become bowl eligible. The Rainbow Warriors (6-7) were scheduled to play Memphis in the Hawai’i Bowl on Dec. 24, but that game was canceled due to COVID-19.

First-year Hawai’i head coach Timmy Chang inherits a team that registered five defensive touchdowns in 2021, gained 27 turnovers and was among the nation’s top 40 in passing yards per completion.

The Commodores are scheduled to depart for Hawai’i on Aug. 21 and when they do they plan to be ready to roll.

“I’m just going to play football. It’s my favorite thing to do,” Orji said. “We all know what we’re going there to do so I don’t think there will be any difficulty getting people to focus.”