NASHVILLE, Tenn. — In 2014, Tate Kolwyck watched Vanderbilt win the College World Series. He knew right then and there he wanted nothing more than to play baseball for the premier program in the country.

“You just saw the energy on the field – everybody was smiling. The energy from watching them was different than any team I’ve ever seen,” Kolwyck recalled. “That’s what started that ultimate dream to come here.”

A few months later, however, as a high school freshman, Kolwyck suddenly had one focus and one focus only: football.

As legend has it, his Arlington High School team lost one quarterback who transferred and another who was injured. The coaching staff turned to a young and inexperienced Kolwyck to lead the Tigers into the season as the starting quarterback.

Kolwyck kept that position for the next four seasons and totaled more than 10,000 passing yards and threw for 119 touchdowns. It was a journey that without question molded his fibers.

“I feel like I had to grow up quickly in that aspect. At that time I was 15 playing with 18-year-olds,” Kolwyck said. “So it was just that mentality of, ‘I have to be mature in these aspects in the locker room. People are looking at me for decision making.’ In that aspect I needed to grow up quickly and try to help my team out.

“But I was blessed with the team I was put on my freshman year. They took me in and really taught me everything. They knew mistakes were going to come with me playing because I was just so young. Everybody was there for me to help me. They took me in and treated me really, really nicely and helped grow into the quarterback I became my senior year of high school.” 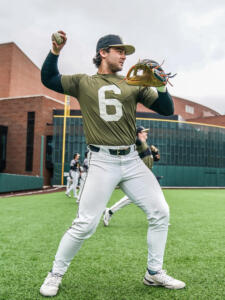 Despite Kolwyck’s prowess as a quarterback, there was never a second thought that he wouldn’t play college baseball. He committed to Vanderbilt as a high school freshman after attending a camp at Hawkins Field and earning a scholarship offer from head coach Tim Corbin.

One of the top baseball prospects nationally in 2018, Kolwyck came to Vandy like any wide-eyed rookie expecting to play as a starter right away. But the Commodores were loaded in 2019. And Kolwyck mostly watched from the bench – he played in four games – as Vanderbilt would go on to win its second national championship in program history.

“I think I grew the most as a human being that year. Just being around Ethan Paul, Julian Infante, Stephen Scott, Walker Grisanti, JJ (Bleday), Austin Martin – just being around a team like that and really understanding what they did everyday with their routine and how they set themselves up, I haven’t learned as much in one single season than I did that year,” Kolwyck said. “Looking back at it, I’m most grateful for that year. It just taught me a lot about myself, taught me a lot about my game of baseball, what I needed to work on and I’m just really thankful I was even a part of that team. Starting my college career off, I couldn’t have asked for a better way.”

Kolwyck may have been in line to have a breakout 2020 campaign, but COVID-19 ended Vanderbilt’s season after the infielder made 11 appearances. He hit his first career home run against Southern California just weeks before the pandemic’s outbreak. 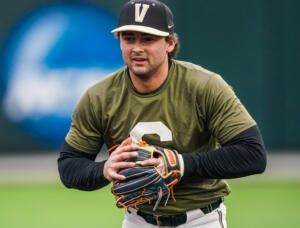 Last season Kolywck finally began to contribute in ways he knew possible. He hit .290 with 25 RBIs, made 72 assists and 52 putouts from the field and had a .371 on-base percentage. Once again, though, fate had other plans.

During a March 23 game against Lipscomb, Kolwyck broke his hamate bone. The injury required surgery, but Kolwyck rehabilitated quickly enough to return April 30 in Gainesville, Florida, against Florida.

One month later, playing in his first career postseason game, Kolwyck tried to stretch a single into a double against Presbyterian at Hawkins Field in the NCAA Regionals. The same left hand he had broken before caught the bag wrong and something immediately felt wrong.

Kolwyck did his best to play through the pain and swelling while X-rays didn’t show any significant damage. It was only months later that a computerized tomography scan revealed a small fracture.

“The biggest thing I learned last year is you could be taken off the field any second of the game,” Kolwyck said. “So I am enjoying every second of every day that I’m on the field or with my teammates or with the coaching staff. Just soaking it up, enjoying it, just loving what I’m doing and just not taking the game for granted.”

Second-ranked Vanderbilt opens the 2022 season at Hawkins Field at 4:30 p.m. Friday with the first of three games against visiting No. 7 Oklahoma State. The Commodores will be counting on the leadership and experience Kolwyck has developed since his arrival to the program in 2017.

The 5-foot-11, 195-pound senior will undoubtedly be a pivotal piece to the right side of Vandy’s infield. He’ll be an even bigger part of the dugout and the clubhouse.

On Saturday, at Vanderbilt’s team banquet, Kolwyck was named the Most Valuable Teammate for the 2021 season.

“That meant the world to me. I’m not big into personal awards – I mean I think it’s good to honor people, but I’m more a team type of guy,” Kolwyck said. “It did make me happy, but that award could go to anyone on the team. There’s nobody that differentiates themself. Everyone on this team is cheering for one another constantly.

“That’s a perk of being at this school with Tim Corbin and the coaching staff here. Everybody celebrates each other and I’ve just been blessed to be a part of it.”

Kolywck has a lot of baseball left in him, not only for the 2022 season but soon after when he hopes to begin a professional career in the sport he loves. The son of a special education teacher and medical device salesman, Kolwyck credited his parents – and his sister who is attending nursing school at Chattanooga – for instilling in him the drive and work ethic to continue to strive for greatness.

Whenever his baseball days are over, Kolwyck hopes to use his degree in human and organizational development to open a gym. Until then, he has lost time to make up for while wearing the black and gold.

And Kolwyck is going to cherish that time to the fullest.

“Just going to soak it up and enjoy every minute of it with my teammates,” he said.