Hawkins Field serves as the home of the Vanderbilt Commodores and with recently completed facilities it stands as one of the top college baseball parks in the country. Built in 2002, Hawkins Field greets all fans with chairback seats close to the field of play, a 35-foot wall in left field that promises unique opportunities for excitement and a first-rate field that prevents bad hops and promotes dazzling defensive gems from the infielders and outfielders alike.

With a brick and rod-iron fence design, Hawkins Field features a classic baseball park atmosphere coupled with a modern design that includes more than 2,400 chairback seats and a state-of-the-art press box. Still nestled along side Vanderbilt Stadium and Memorial Gymnasium on the west end of campus, the ballpark was constructed as the Commodores’ first baseball-only facility in school history. It was built near the exact location of McGugin Field, which served as Vanderbilt baseball’s home field for 76 years and part-time football practice field.

A 4.5 million dollar project to add on to Hawkins Field was completed in the spring of 2006. Phase 2 featured the addition of over 475 new stadium seats along the baselines.

Phase 3 included the construction of a two-story complex along the third baseline, including locker rooms, a weight room, coaches’ offices and a Hall of Fame. It was completed at the end of the 2006 season and now houses the team. The team also has a new pitcher’s area enclosed in the football stadium next door, as well as a new indoor batting cage inside Memorial Gym.

New for 2009, permanent bleacher seating was added in the outfield from the rightfield foul pole to the Green Monster wall in left. In addition, 200 additional chairback seats were added on the first base side. A new trainer’s room has been created along with renovated dugouts.

The latest enhancement to Hawkins Field placed the facility into a league of its own, which was completed prior to the 2018 season. The 30,000-square foot facility houses a state-of-the-art classroom, cardio room, fueling station, new and expanded weight room, current and pro player locker room, recruiting area as well as coaches’ and staff offices. Graphics that highlight the program’s rich history adorn the walls throughout.

The $13 million project, expands Memorial Gym to just beyond the left field wall and moves the team’s batting cages to a below-ground level of Memorial Gym that has been retrofitted for that purpose.

The complex is named for the Charles Hawkins Family. Charles Hawkins III, the stadium’s namesake, was a long-time contributor to the Vanderbilt community, who graciously donated more than $2 million to the stadium project. Sadly, he passed away on June 16, 2004, after his beloved Commodores ended one of their most successful seasons ever. A successful real estate developer, Hawkins played baseball and football for the Commodores from 1952-1954 and became the first Vanderbilt pitcher to earn All-Southeastern Conference honors. He was named to Vanderbilt’s Athletic Hall of Fame in the fall of 2009. His father, Charles Hawkins II, lettered in both baseball and football at Vanderbilt in the mid-1920s. 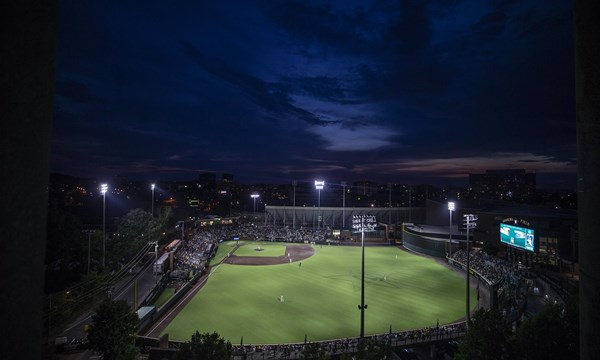