Rodriguez Rises to the Top

NASHVILLE, Tenn. — Much to the chagrin of Edith Rodriquez, Carlos Rodriguez Jr.’s first word was, “ball.”

So it certainly seemed destined that the first-born child in the Rodriguez family would gravitate to the playing field.

“That’s confirmed,” Rodriguez said about that initial word to come from his mouth. “My mom was pretty upset about it because she had stayed home with me for the first part of my life – she was kind of upset that my first word was ball.”

Going into a weekend series at Ole Miss, which starts at 6 p.m. Friday on the SEC Network, Rodriguez – known now as CJ – is hitting .293 over 37 games. The sophomore has driven in 25 runs and smacked four homers. But it’s his work behind the plate as Vanderbilt’s starting catcher that has garnered notoriety.

That’s impressive for a young man who has only been playing the position for a few short years despite his love for “ball” since infancy.

“I was actually an infielder growing up,” Rodriguez explained. “My whole life I was an infielder and then I wanted to try a new position to be more versatile when I was in eighth grade. My travel ball coach suggested catching because I have pretty good hands.

“I did one practice at catcher and he told my parents, ‘Yeah, he’s never going to see the infield again.’ That’s when I made the transition.” 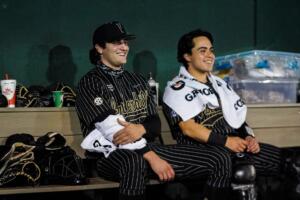 A California native who grew up in Newport Beach, Rodriguez played basketball and football (he was a quarterback on the gridiron who also loved playing defense so he could hit) as well before turning his focus fully toward baseball. He learned about work ethic from mother Edith, a successful real estate agent, and father Carlos Rodriguez Sr., a police officer for the city of Huntington Park who is approaching 30 years in law enforcement.

Rodriguez began to realize baseball may give him an opportunity to play at the next level when he entered high school. Scholarship offers started to arrive in the mail and Vanderbilt associate head coach Scott Brown had seen the prospect play while visiting one of Rodriguez’s high school teammates.

After attending a camp at Hawkins Field and being invited on a recruiting visit to Vandy, Rodriguez was offered a scholarship. He committed on the spot.

“I didn’t even really take (baseball) too serious growing up. I just played because I had fun doing it,” Rodriguez said. “I think probably around eighth grade I started to get looked at by schools and getting some offers by schools and started to realize this is real and something I could possibly do if I take the next step in my development.

“I didn’t expect anything at the time (during my recruiting visit). It was my first time meeting all the coaches and staff. When (Vanderbilt head coach Tim Corbin) hit me with the offer I was like, ‘Oh this is my dream school. I don’t think about anything else. This is where I want to be.’ ”

Rodriguez’s first season on West End was cut short by the COVID-19 pandemic. He started all 12 games he played in, hit .289 and drove in eight runs. In a win over Connecticut in Scottsdale, Arizona, the then-freshman went 4-for-4 with three RBIs.

But Vanderbilt still wasn’t 100 percent sure what type of player Rodriguez would be going into the 2021 season.

“I think now 100 at-bats later and several games later, I think he’s kind of getting that consistency where he can bring it essentially to the middle every day and be consistent both offensively and defensively. Consistency has been the biggest thing with him – bringing it every day.”

Macias works with Vanderbilt’s catchers and explained how difficult the learning curve can be at times for youngsters behind the dish. Managing Vandy’s incomparable pitching staff on a daily basis while grasping an ever-changing signing system is no easy task.

Rodriguez has been no different than other Commodore catchers as it relates to how he has been educated at Hawkins Field. Some of the attributes that have led to his success, however, can’t be taught.

“His hands, he’s got really strong, yet soft hands,” Macias said. “He’s got a really quick exchange, he can throw and he’s athletic. That allows him to block and throw and kind of do everything in between. He’s got a lot of physical traits that help him – but he does work at it, too.”

Rodriguez has said he enjoys watching the catching stylings of Yadier Molina, Wilson Contreras and J.T. Realmuto. He’ll implement aspects of their respective games – and that of other Major Leaguers – into his own repertoire. 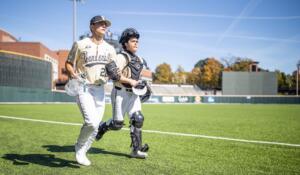 He also doesn’t back down from the challenge of coming to the park every day knowing he’ll get to be part of a battery featuring a top pitching prospects like Kumar Rocker, Jack Leiter, Mason Hickman, Jack Eder or Luke Murphy, to name a few. Rodriguez was behind the plate for all 124 pitches of Leiter’s no-hitter against South Carolina on March 20 at Hawkins Field.

“I think a lot of people think it’s tough, but when you’re around these guys all the time and especially when you have a good relationship with them outside and off the field it makes it even better. When you have success on the field it makes it that much sweeter,” he said. “But it’s not hard. It something I like to do and it’s fun and it’s enjoyable because these guys are all professionals.

“I know these guys are Major League arms right now so I guess when I stop and slow down a little bit and think about what I’m doing, yeah, it gives me confidence to know I can handle these guys pretty good and especially going forward to the next level.”

A self-described beach bum, Rodriguez is a Human and Organizational Development major who said he is gravitating toward following his mother’s footsteps into real estate. He is also eligible for the upcoming 2021 MLB Draft this summer, but said he’s only focused on winning games for the Commodores (35-10, 16-7 SEC) right now and not on his possible future as a professional ballplayer.

Rodriguez, who has recorded 27 assists and thrown out eight of 13 would-be base stealers, also emphasized he has a lot to work on when it comes to his offensive and defensive games – the biggest aspect for both being consistency.

So whether Rodriguez plays his final game for Vandy in June or in 2022 or in 2023, he wants to make sure his lasting impression on the field is just as notable as the one off of it. He has certainly caught Vanderbilt fans’ attention in both areas thus far. 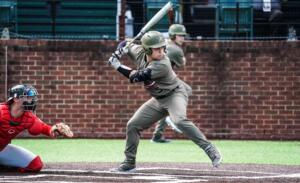 “I just want to be known as someone who worked hard but was also very friendly,” Rodriguez said. “The first impression you make on people is the most important thing and you may only have one encounter with a person or a fan and if you’re nice to them you make their day. If you can let them come in and see the field for a second that may be something they remember forever.

“That’s kind of what I want to be known as, the guy that is really nice to everyone he meets and makes them feel very special even if it’s just that one time.”