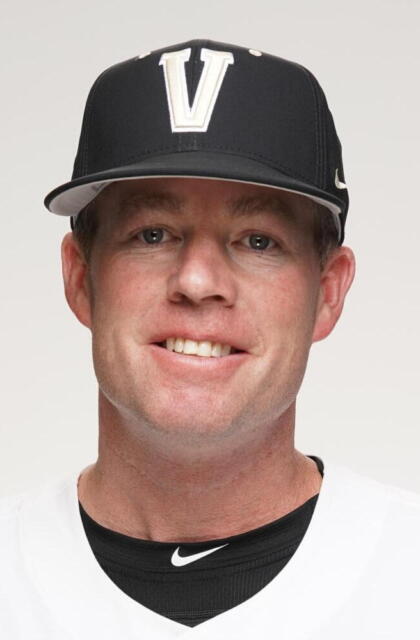 The 2022 season is Scott Brown’s 10th as the pitching coach and seventh as associate head coach at Vanderbilt. Brown has helped the Commodores go 391-160-1 (.709) and strike out a nation-high 5,336 batters during his eight seasons.

Vanderbilt concluded its 2021 season with a second straight appearance to the College World Series, marking the second time the program has made consecutive trips to Omaha. The Commodores finished as the national runner-up behind a 49-18 mark, falling one game short of the national title.

Vandy set a program record with 790 strikeouts, which ranked second in the nation. The pitching duo of Kumar Rocker and Jack Leiter tied for the nation’s lead in strikeouts with 179 apiece, becoming the first pair of teammates to lead the country in strikeouts in at least 30 seasons.

Rocker tied a program single-season record in wins with 14, which placed him first in the country, while Leiter ranked sixth in the nation with 11 wins on the campaign. Rocker and Leiter were tabbed finalists for both the Golden Spikes Award and the Dick Howser Trophy, becoming the third Vanderbilt duo to do so in the same season.

The Commodores closed out the campaign with a 3.46 ERA, which ranked eighth in the nation and led the SEC, while notching eight shutouts on the season. The Vandy pitching staff led the country in hits allowed per nine innings with a mark of 6.26, while posting the second-best WHIP in the nation at a mark of 1.11.

In July, Leiter and Rocker were both selected in the top-10 of the Major League Baseball Draft, marking the second time that Vanderbilt has had multiple top-10 picks since Brown’s arrival to Nashville.

The Commodores capped their shortened 2020 campaign ranked No. 5 by Collegiate Baseball. Vanderbilt led the nation in ERA (1.84) while finishing third in hits allowed per nine innings (5.51), fourth in strikeouts per nine innings (12.1) and fifth in shutouts (4). Vanderbilt tossed three consecutive shutouts for the first time since 2011, doing so from Feb. 18-21.

In 2019, Vanderbilt led the nation with 765 strikeouts, marking the third time in six seasons the Commodores have accomplished the feat. Three pitchers finished in the top-15 nationally in wins including right-hander Drake Fellows, who matched a national-best with 13.

All six draft-eligible pitchers were selected in the 2019 MLB Draft including Fellows who was taken in the sixth round by the San Diego Padres. Reliever Tyler Brown, who enters his junior season in 2020, set a school record with 17 saves, a mark that ranked second nationally and tops in the SEC.

Right-hander Kumar Rocker burst into the spotlight, being named the College World Series Most Outstanding Player in addition to being tabbed freshman of the year by Baseball America and D1Baseball.com. n a 3-0 win over Duke in the NCAA Super Regional on June 8, Rocker threw Vanderbilt’s first individual no-hitter since 1971. Rocker set a Vanderbilt postseason record for strikeouts (19), surpassing David Price’s mark of 17 against Austin Peay in 2007.

The 2017 season resulted in Brown’s fifth first-round arm taken in the MLB Draft when the Atlanta Braves selected Kyle Wright with the fifth overall pick. The right-hander started 16 games for the Dores and went 5-6 with a 3.40 ERA. He struck out a team-high 121 in 103.1 innings pitched. He was named first-team All-SEC, joining Carson Fulmer as Commodore pitchers to nab first-team honors.

Brown’s staff posted five shutouts to run the total to 35 during his tenure. The pitching staff led the SEC in hits allowed per nine innings. The group yielded only 7.47 hits per nine, sixth-best in the country.

Brown’s fourth season on West End featured another first-round pick in Jordan Sheffield, his fourth with the Commodores. Sheffield headlined a young pitching staff that punched out 593 batters and walked just 211, the team’s fewest since 2011. The staff also combined for nine shutouts. Junior Ben Bowden’s 10 saves led the Dores and placed him fourth in a single season at Vanderbilt all-time.

Sophomore Kyle Wright blossomed in a move from the bullpen to the starting rotation, going 8-4 with a 3.09 ERA in 16 starts. Wright earned second team All-SEC honors after going 5-3 with a 1.76 ERA in his 10 league starts. Brown also developed freshman Patrick Raby into a freshman All-American and freshman All-SEC pitcher in his first season. Raby started 10 games for the Commodores, going 7-1 with a 2.61 ERA.

For the second straight season, Brown’s pitching staff broke the school record for strikeouts, smashing 2014’s total with 703 strikeouts as the Commodores marched back to the College World Series finals for the second straight year. For the third time under Brown, Vandy posted a team ERA under 3.00 (2.84), marking the first time in program history the team has posted three consecutive team ERAs under 3.00. The Dores’ 14 shutouts led the nation and also set a program standard.

The Vanderbilt pitching staff held two first round picks in Carson Fulmer (8th overall) and Walker Buehler (24th overall) and a third-round pick in Philip Pfeifer. Fulmer matched the school record with 14 wins en route to National Pitcher of the Year honors and being named consensus first team All-America as well as SEC Pitcher of the Year. He became the fourth pitcher in league history to win the pitching triple crown, leading America’s best conference in wins, ERA and strikeouts. Fulmer’s career ERA of 1.99 is just the second sub-2.00 career ERA in school history, joining the legendary Jeff Peeples.

Brown developed Kyle Wright into a freshman All-American as the right-hander moved into the team’s closer role at the end of the season, finishing the year with a 6-1 record and 1.23 ERA.

Brown’s second Vandy pitching staff set the school record with 636 strikeouts, passing the epic 2007 pitching staff that featured David Price and Casey Weathers. The Dores’ pitching staff also posted a sub-3.00 ERA for the second straight season under Brown with a 2.90 team ERA led by All-SEC pitcher Carson Fulmer, whose 1.98 ERA was the fifth-lowest in school history and lowest since 1973.

Fulmer’s low ERA marked the second straight season that a Commodore pitcher posted an ERA in the top 10 in school history. Fulmer also led the team with 10 saves before seamlessly transitioning to the starting rotation midway through conference play.

The staff also featured first-round pick Tyler Beede, who led the team with 116 strikeouts, and 12-game winner Walker Buehler. Buehler’s 12 wins matched the third-most in a single-season by a Commodore.

The Commodores’ pitching staff posted one of the best years in Vanderbilt history in Brown’s first season going 54-12 with 24 saves and a team ERA of 2.76 – marking the second time in three years the Dores have posted a sub-3.00 ERA. The Vandy pitching staff was dominant led by All-Americans Tyler Beede, Kevin Ziomek and Brian Miller leading the way with freshman All-American Carson Fulmer playing a key role. Beede and Ziomek paired up to be a force for the Commodores combining to win 25 games with Beede winning a school record 14 games. Miller became the school’s all-time saves leader with a school single-season record 16 saves in 2013 to give him 21 in his first two seasons.

Brown’s work with freshmen Fulmer, Buehler and Tyler Ferguson was evident as the trio improved throughout the season. Fulmer blossomed into one of the Dores’ most valuable pitchers in the bullpen down the stretch. Buehler spent time in the weekend starting rotation and Ferguson started four midweek games for the squad going 3-1.

Led by first-team All-Big East and second team all-region honoree Kyle Hansen, the 2011 staff tossed four shutouts, had 399 strikeouts and limited opponents to just a .261 average. Hansen, who tossed a complete-game shutout against Notre Dame, set a school-record with 107.2 innings pitched and finished with 106 strikeouts, good for sixth all-time.

The 2010 pitching staff helped the team win a school-record 43 games and racked up 455 strikeouts, second-most in school history. A third-team All-Big East selection, freshman Kyle Hansen earned freshman All-America honors from Baseball America, Louisville Slugger and the NCBWA, and was the Big East Tournament Most Outstanding Player. Three players were drafted in the MLB Draft, and alums Rob Delaney and Anthony Varvaro each made their Major League debuts.

A season after seven pitchers graduated or were drafted, a young 2009 staff that featured four freshmen ranked sixth in the Big East with 328 strikeouts. Brown also had two of his alums, Rob Delaney and Anthony Varvaro, added to MLB 40-man rosters.

Brown helped lead the 2008 pitching staff to a 3.78 ERA, which ranked first in the Big East and ninth in the country, and gave the Red Storm staff an ERA that ranked in the top 10 nationally for the third straight season. Lefty George Brown was a second-team All-American, Big East Pitcher of the Year and a first team all-conference selection, while Scott Barnes (first team) and Colin Lynch (second team) also earned all-conference honors. Five players were also selected in the MLB Draft, as Barnes (8th round), Justin Gutsie (14th), Jared Yecker (22nd), Brown (27th) and Lynch (40th) all signed professional contracts.

The 2007 staff posted a 3.48 ERA, which ranked 10th in the country and second in the Big East, and two pitchers earned All-Big East recognition as southpaw Scott Barnes was named to the first team and lefty George Brown earned third-team honors.

In his third season at St. John’s, Brown guided the 2006 pitching staff to an ERA (3.21) that ranked fifth in the country.

The 2005 Red Storm staff had a combined 3.38 ERA and set a school record with a conference-leading 499 strikeouts. Craig Hansen and Anthony Varvaro each earned All-America honors, while Hansen was named Big East Pitcher of the Year. Four pitchers went on to sign professional contracts. Hansen went on to become the first player in Red Sox history to make his major league debut the same year he was drafted.

In 2004, his first season at St. John’s, Brown guided the Red Storm pitching staff to a 3.86 ERA, which ranked second in the Big East and was nearly a run-and-a-half better than the previous season.

From 2002-04, Brown served as the head coach of the Sanford Mainers of the New England Collegiate Baseball League, one of the top summer wooden-bat leagues in the nation. Brown was named the league’s manager of the year.

Brown came to St. John’s from the State University of New York at Cortland, where he served four years as an assistant coach.

Brown first entered the coaching ranks after a stellar three-year pitching career at Cortland. A second team All-American in 1999 after going 9-1 with a 2.03 ERA, Brown racked up 19 career victories at Cortland, a mark that tied for fifth-most in school history.

Brown and his wife Mary have one son, Nolan, twin daughters, Kelsey and Riley, and daughter Emma.