OMAHA, Neb. — Baseball is just a game. Oftentimes, however, it is a game that can help heal.

For Jackie and Sam Dooyema the healing process is continual, maybe even everlasting. But baseball – and Vanderbilt baseball in particular – has been a shoulder for them to lean on during a time of unthinkable loss.

An April of Change

Near the end of 2020, Jackie and Sam learned that Jackie was pregnant with the couple’s first child. In February, the pair returned home to the Midwest to tell friends and family the momentous news.

The Dooyemas had also previously opted for prenatal and genetic testing to learn of their new child’s gender. Part of the results from those tests revealed that Hannah Violet Dooyema may have Turner syndrome.

Turner syndrome results when one of the X chromosomes in a female is missing or partially missing. The condition can cause medical and developmental problems, none of which was going to deter the Dooyemas in becoming the best parents they could be.

There was also hope that those tests were falsely positive.

So on April 7, when Jackie and Sam returned for more tests and to check the well being of Hannah, expectations were in place that the Turner syndrome diagnosis could have gone away on its own or that Hannah just may have a few more challenges in this world when she met it.

No one had expected a third outcome.

“When they did the anatomy scan the doctor came back and said they had found a birth defect and they said our daughter wasn’t going to make it longer than four more weeks,” Sam said. “And they said that was a generous estimate.”

Sam Dooyema was an offensive lineman at the University of Sioux Falls, a Division II program in the southeast corner of South Dakota by the Minnesota border. 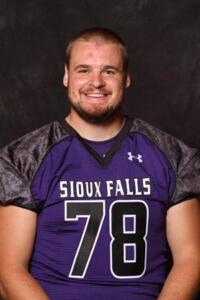 After graduating with a degree in biology and working at a biomedical research institute for a few years he started applying to graduate schools. Sam, now a PhD candidate in microbiology at Vanderbilt, also started dating Jackie Trego, a former University of Sioux Falls cheerleader.

Sam was upfront and told Jackie that the universities he was considering were all pretty far away and mostly in the Southeast. He desired to attend a school with strong, Division I athletics so he would have a team to cheer for on the NCAA’s highest level.

Five days before leaving for Nashville to become a Vanderbilt Commodore, Sam proposed to Jackie. One year later, in 2017, the two were married.

Because of their love for baseball they quickly grew attached to the Vanderbilt program in recent years. One of their favorite memories was being on the 10th floor of the 25th Avenue parking garage and watching Ethan Paul down below hit a game-tying, three-run home run in the bottom of the ninth against Mississippi State inside Hawkins Field.

Sam and Jackie were atop that same parking garage April 9.

Just days after the news of April 7, family had flown in from across the country to offer support for the Dooyemas. And since everyone was in town, Jackie and Sam suggested the whole crew head to their favorite spot to watch the Dores play Georgia as a way to take everyone’s mind off reality. 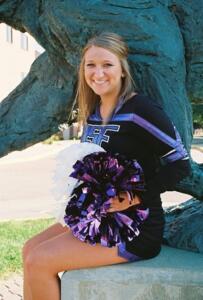 Jack Leiter threw seven innings on three-hit, one-run baseball and struck out 13 while Vandy won 5-2. And for a couple hours Sam and Jackie could forget.

“I think for us it was a sense of normalcy a little bit,” Sam said. “You have so much going on in our personal life after getting the news, going through the trauma. Baseball was just – you’re off for a couple weeks, then you’re back at work and even work doesn’t feel normal. So just going to a baseball game just felt like normal and peaceful.

“We knew why family was there, but in that moment, we were showing our family something we like to do just like anyone does when you have visitors in from out of town – come share this experience with us.”

Jackie had felt Hannah move that Friday, April 9. On April 10, Sam’s 30th birthday coincidentally, Jackie sensed something was different. The two went to the hospital and learned Hannah’s 20-week life had ended.

Sam and Jackie won Vanderbilt’s VIP experience last week and were awarded a trip to the College World Series. Expenses for airfare, a hotel room and game tickets were all covered.

After a long day of travel Saturday, followed by the Commodores’ epic 7-6 win in 12 innings over Arizona, Sam awoke Sunday to learn his grandfather had died in the early hours of the day.

So Sam and Jackie drove Sunday to Luverne, Minnesota, to be with Sam’s own father on Father’s Day. And to take a break from the grieving the couple got some ice cream and stopped at a nearby park to watch the sunset.

“To watch a Midwestern sunset for those shades of violet, our daughter’s middle name, now that would be cathartic and downright spiritual,” Sam had written in his winning entry submission to be considered for the VIP experience contest.

Omaha Always on the Mind

Jackie, a South Dakota native and now a physical therapist, came to the College World Series often as a child with her family. But she never had a specific team to root for – until now.

Sam’s experience over the weekend was his first at what the locals call the “Greatest Show on Dirt.”

On Monday, Sam and Jackie returned to Omaha to watch the Dores one last time at TD Ameritrade Park before returning to Nashville on Tuesday. Once again it was Leiter on the mound and the Dooyemas witnessed a performance for the ages as the sophomore fanned 15 hitters in a classic duel that Vanderbilt lost 1-0 to North Carolina State.

The contest lasted just two hours and 28 minutes and finished at 8:35 p.m. That gave Sam and Jackie time to leave the ballpark so they could catch one last Midwestern sunset on their walk back to the hotel.

“We kept looking at each other Saturday at the game like, ‘We’re here.’ We couldn’t believe it,” Sam said. “We see ourselves moving home and this kind of confirmed that. After our time in Nashville we’d like to move back to South Dakota – after burying Hannah there that sealed the deal.

“That was always the plan and now this will always be our summer tradition. We want to be the Vandy fans that come every year.”