NASHVILLE, Tenn. — Thomas Schultz is in the discussion when it comes to who is the best pitcher on the Vanderbilt roster.

There’s no debate as to what Schultz excels at above all his teammates.

“Best player on the team,” outfielder Spencer Jones chimed in when Schultz was asked about his basketball prowess.

Schultz, a 6-foot-6, 225-pound reliever, was known more as a star basketball player in his hometown of Mt. Carmel, Pennsylvania, before he got to Nashville. He played forward for Our Lady of Lourdes and racked up 2,335 career points – a school record.

As a senior, Schultz averaged 22.6 points per game. Three times he was named the Daily Item (Sunbury, Pennsylvania) Player of the Year. Lourdes won back-to-back district championships and advanced to a state title game during Schultz’s career.

“Basketball was one of the major highlights of high school for me,” Schultz said. “A lot of my closest friends, we were fortunate enough to make a lot of successful runs in the playoffs. Just all around great experiences.” 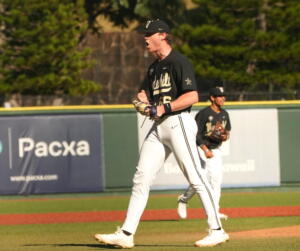 Schultz said he wasn’t really recruited to play college basketball because everyone knew his passion for baseball and commitment to Vanderbilt was unwavering. He actually had to transfer to Mount Carmel Area High School in order to pitch because Our Lady of Lourdes did not field a baseball team.

Leaving the hardwood behind for good in 2019, Schultz arrived to Vanderbilt and said he was a, “skinny, scared kid,” who didn’t properly know how to pitch. With the guidance of Vanderbilt pitcher coach Scott Brown and the strength and conditioning training of Chris Ham and Walker Grisanti, Schultz began to blossom.

But Schultz’s pitching career is only truly just beginning. His 2020 season was cut short due to the COVID-19 pandemic and the right-hander then pitched 44 innings in 2021 and finished with a 4.09 ERA.

This season Vandy has looked to Schultz to be a shut-down arm at the end of the night. His four saves leads the Commodores and he has fanned 17 hitters in 14.2 innings.

Schultz said he owes some of that success to a return to the gym. In the fall and winter, before the start of the season, Schultz picked up a basketball.

“I wanted to get athletic again and move better on the mound,” Schultz said. “Pretty much the whole fall, whenever I had time, I’d go in our gym and shoot around or play pick-up to work on getting my athleticism back.”

Schultz now features three pitches on the mound: A two-seam fastball, a slider and a changeup. He made the switch from a four-seam fastball this offseason and said because of the arm slot from which he throws his slider he thinks that breaking ball is his most dominant pitch. 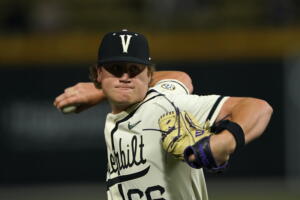 Vanderbilt head coach Tim Corbin said Schultz’s increased confidence and his ability to pitch with conviction has helped him improve.

“His strike percentage is very, very high,” Corbin said. “I just like his makeup for what he’s doing.”

A double major in medicine, health and society and human and organizational development, Schultz derives his work ethic from his father, a crane operator, and mother, a pharmacist. He also said he tries to model his character after sister Rachel Schultz, a former standout basketball player at Elizabethtown College who Thomas called, “the perfect example for me.”

Schultz and Vanderbilt (23-9, 5-7) host Florida (21-12, 5-7) for a pivotal three-game conference series starting at 6 p.m. Friday. At some point over the weekend the Commodores will look to Schultz to make the winning pitch, just like he used to make the winning shot on the basketball court not too long ago.

And he wants to be out there for as many of those winning moments as possible over the next few months.

“I’m really just trying to enjoy every day I can with these guys,” he said. “We’re a really close group. So I’m just having fun, competing as long as I can with them and from there whatever happens happens.”