NASHVILLE, Tenn. — Vanderbilt offensive coordinator David Raih won’t fully install his offense this spring. He estimates by the middle of April the Commodores will know about 65-70 percent of the playbook.

There are some more pressing lessons to learn during the five weeks that Vandy is on the field.

“The bottom line for us to get to where we want to go is all about structure, training and then believing that we can do,” Raih said. “Coach (Clark) Lea provides such an incredible structure and environment for these student-athletes to come into every day. The expectations are crystal clear. That helps us being a whole new staff.

“Coach Lea’s doing a phenomenal job with the structure, the environment and the expectations. Now it’s really our job to train the student-athletes at the highest level possible. I think along with that they’ll just continue to believe in it.” 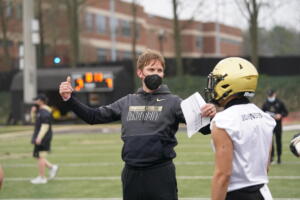 After two years with the Arizona Cardinals and five with the Green Bay Packers, respectively, Raih came to Nashville charged with creating a dynamic attack for Vandy. His influences run a wide range stemming from his time in the NFL after stops at UCLA, Iowa and Texas Tech.

So far, the Commodores have bought into all that Raih has put forth.

“I’m proud of the way they’re working,” he said. “The effort and the attitude – you’re seeing it. The effort, the attitude and the assignment have all been pretty good, particularly for how much we’ve installed. 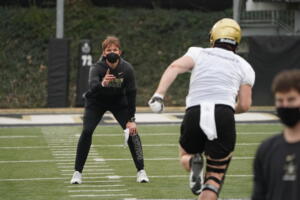 Vanderbilt returns a plethora of familiar names on the offensive side of the ball giving Raih a solid foundation to work with.

Among the notable returnees for Vandy on the offensive side include Chris Pierce Jr., Amir Abdul-Rahman and Cam Johnson at wide receiver, Gavin Schoenwald and Ben Bresnahan at tight end, Ja’Veon Marlow and Rocko Griffin at running back, Mike Wright and Ken Seals at quarterback and Jonathan Stewart, Cole Clemens, Tyler Steen, Julian Hernandez and Drew Birchmeier up front.

There will be plenty of time for those Commodores to make plays and execute in the fall. But right now, Lea is looking for them to take ownership over proper alignments and techniques each and every play.

“It’s a game of inches,” Lea said. “You don’t have that until you have ownership over the alignment. That’s just one example of how inputs can impact performance, too. We try to clear all the those lines and clear all the static so our guys can focus on alignment, assignment, technique, execution and finish.”

With Vanderbilt’s spring practice reaching the halfway point, and with one scrimmage already in the books, Raih and his offensive assistants will continue to mold their system leading up to the annual spring game April 17 – but also throughout the summer and into fall camp.

What has helped tremendously in that process has been the Commodores’ willingness to do what they’re asked as a new era of Vanderbilt football begins.

“For as short as we’ve been together, the players are into it,” Raih said. “You can tell they want to do it right and they want to be good. We’re working on our daily habits and our training big time. The belief that we can get to where we want to go will come with that.”