A Raih for Success

NASHVILLE, Tenn. — The way David Raih sees it, it’s like he’s been training his whole professional life to be a surgeon. Now it’s time to operate on SEC defenses.

Vanderbilt’s new offensive coordinator and wide receivers coach has come to Nashville looking to combine all the major lessons he has learned throughout his career into an offense that will give the Commodores a new look.

“I’ve spent 13 years training with the offensive line, quarterbacks and wide receivers with great coaches,” Raih said. “To be able to put it all together, I am so happy and overjoyed to do that.” 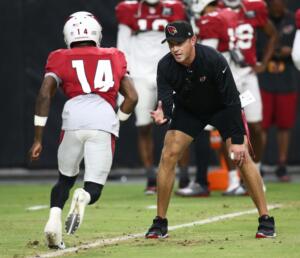 Raih left the Arizona Cardinals after two seasons working with greats DeAndre Hopkins, Larry Fitzgerald and former Commodore Trent Sherfield, as well as coach Jerry Sullivan. Before that the former Iowa quarterback was on the offensive staff at Green Bay, where he credits coaches Mike McCarthy, Tom Clements, Jim Hostler and Mike Solari in shaping some of his philosophies and ideals.

While his Vanderbilt offense begins to take shape over the coming months leading to September, Raih will be focused on teaching his young men the proper way to take the field each and every play.

“The thing we have to hang our hat on is being the most fundamentally-sound team,” he said. “That’s not talking about it. That’s the actual drills that we train day-in and day-out. Pretty soon it just starts happening. So we will be very detailed in the training of what we do every day from a drill standpoint.”

What exactly will Raih’s offense look like? That will be kept close to the vest until the 2021 season is well underway.

But Raih’s influences from his days as a Hawkeye, Packer and Cardinal should be apparent as the Commodores begin this new era of football.

Until then, Raih will work closely with the team’s wide receivers – among other positions groups – about how to correctly and efficiently train and play the position. Raih said it all starts with beating the press, vertical pressure and developing the route. 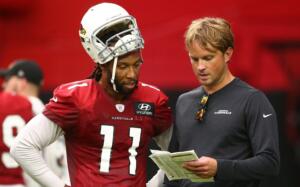 “I’ve had the great fortune of working with David Raih as my position coach for the last two seasons and know firsthand what an extraordinary person and coach he is,” Fitzgerald said. “I have not been around anyone who brings the level of energy, enthusiasm and passion to their job on a daily basis like David does.

“He is an exceptional coach and teacher with a brilliant offensive mind. The young student-athletes he will serve will better human beings by knowing him. There isn’t any doubt in my mind he will do an incredible job at Vanderbilt.”

From Edina, Minnesota, Raih played quarterback at Iowa, where he was part of a 2002 squad that won a Big Ten Conference championship and played in the 2003 Orange Bowl. After a short time in medical sales he longed to return to the world of football and joined Rick Neuheisel’s staff in 2008 at UCLA – Vanderbilt head coach Clark Lea arrived in Los Angeles a year later to coach linebackers as a graduate assistant.

“(Raih) has an innovative offensive mind and a dynamic personality,” said McCarthy, now the head coach of the Dallas Cowboys, who gave Raih a job in Green Bay. “His enthusiasm, recruiting ability and knowledge of the game will be a great asset to the success of the Vanderbilt football future.”

Vanderbilt’s 2021 offensive roster will have plenty of playmakers returning for Raih to get to know, including quarterbacks Mike Wright and Ken Seals, running back Keyon Henry-Brooks, tight end Ben Bresnahan and wide receivers Cam Johnson and Chris Pierce Jr. Raih will also be Vandy’s fourth offensive coordinator in as many seasons making the learning curve steep for the student-athletes.

But Raih said he is up for the challenge and looking forward to this new chapter of his career.

“I came to coordinate and lead,” Raih said. “The main thing I’m talking to the staff about is I’m here to lead, to empower, to help us bond and to collaborate.