NASHVILLE, Tenn. — A very important segment of the Clark Lea era, the first spring practice under the new head coach, is in the books. Vanderbilt closed that crucial chapter Saturday with the program’s annual spring game – a scrimmage in which the team’s offense put up 68 points and all three quarterbacks played exceptionally well.

It was a small glimpse into what the Commodores under Lea, offensive coordinator David Raih (absent Saturday due to the birth of his daughter) and quarterbacks coach Joey Lynch could feature come September when Vandy takes the field again. 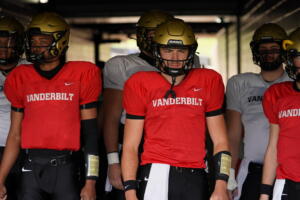 “I was pleased with the offense and would have liked to have seen some better responses on defense at times, but sometimes the context is going to hold them back, too. I don’t want to read too far into it,” Lea said Saturday.

“I think the defense has had a great spring and I’m just really pleased with the rhythm the offense has found,” Lea added. “Looking to both learn on the defensive side from the things we can shore up and then build on the momentum from the offense.”

For 14 practices, Vanderbilt’s defense, under the direction of defensive coordinator Jesse Minter, controlled much of the narrative. But on Saturday the scoring came quickly and consistently.

Sophomore Mike Wright was the first quarterback to connect on a touchdown pass before senior Jeremy Moussa recorded one of his own and then sophomore Ken Seals jotted his name into the scoring passes column. Lea said he prefers to have one player take the majority, if not all the snaps, at quarterback in a game, but the offense will do whatever it needs to do to move the ball down the field and put points on the board. 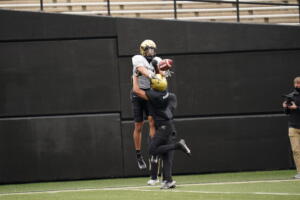 “At times I thought all three showed the ability to move the ball,” Lea said. “(Wright) obviously made some plays with his legs. Was glad to see (Moussa) pull the ball and score a touchdown – that was awesome.

“It’s the right attitude they have. I thought we saw the ability of each of them to throw, to win throwing, to win running and we just have to continue that competition, a healthy competition, through the fall. Pleased with the progress, thought today was a good day for them.”

Of course, the participants who shined Saturday may not be the ones who rise to the occasion in the fall. And there will be new names and faces added to position battles throughout the summer and fall camp to strengthen Vandy’s depth and team profile under Lea.

So while Saturday put a bow on Vanderbilt’s spring practice and provided a flash of the future, it certainly didn’t paint the whole picture. That canvas has many spots left to fill. 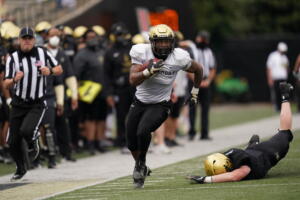 “We’re looking for the smallest of wins right now,” Lea said. “We have a long way to go in terms of the development of the skill on our roster and in terms of executing within the systems, of practicing like every rep is a game rep. That’s stuff we’ve made strides on but we have to continue to push that.

“We’ve had fun. We’ve put together 14 two-hour practices where we’ve gone at it hard. No one has backed down. We’ll reap the benefits as we move into the summer and start to build this team to be ready to not just sustain through the season but to actually try to separate during the season.”