NASHVILLE, Tenn. — With two starters on the sidelines with injury Saturday, Vanderbilt found it hard to keep up with visiting Texas A&M during a 69-50 defeat at Memorial Gymnasium.

“Kind of expected us to be down and not be able to respond the way that we will before this year is over,” Vanderbilt head coach Jerry Stackhouse said. “But it’s now it’s about working on our mental, understanding that he’s probably not going to be with us so we now got to try to find a way to pick ourselves up and win games – and I’m confident we’ll do so.

“We got a tough group of guys out there, but it was a tough blow understanding that our leader and our best player who has been a huge part of what we’ve done so far is probably no longer going to be with us (for the remainder of the season).”

Vandy’s Ejike Obinna had 12 points and seven rebounds and Maxwell Evans and Scotty Pippen each added 10, but the Commodores were 5 of 30 from distance (2-for-15 in the second half) and just 15 of 50 overall.

“It’s a big adjustment for all of us,” Evans said on the absence of Nesmith. “I feel like we all have to do a little bit more. (Nesmith) was our best player and leader on the court, so just to fill in his spot we’ll have to talk a little bit more and make plays for each other.”

Texas A&M began the day on a 7-0 run over the first two minutes. Obinna’s dunk at the 16:06 mark was Vandy’s first made field goal.

The Commodores couldn’t put together any sort of scoring run the rest of the half as A&M eased into the break with a 36-20 lead. Vandy shot just 3 of 14 from distance and turned the ball over seven times – it also missed 10 if its final 11 shots of the period.

Gordon had 11 points for Texas A&M at halftime and the Aggies had 18 points from inside the paint.

“I just thought that we didn’t have our compete level to where it was supposed to be today,” Stackhouse said. “That was the best crowd we’ve had so far and it’s really disappointing that because of these events that have happened over the course of the last few days we weren’t able to take advantage of the momentum of how we played over the last couple of games.”

The start of the second half didn’t fare much better for the home team as A&M stretched the margin to 53-24 on Savion Flagg’s right-corner 3. Vanderbilt went nearly six minutes without a made field goal as the game got out of reach.

Texas A&M led by as many as 31 in the second half.

Jay Jay Chandler added 10 for the Aggies who had a 38-29 rebounding advantage.

“The good thing is we’re able to back away from it for a day, get back and show some of the things that we were able to do well,” Stackhouse said. “I think guys wanted to do some things, but it was almost like they were paralyzed by the situation. We got to find a way to get them out of their own heads and understand that we can still do some things, we can still be good with the group that we have.”

Nesmith missed Saturday’s game due to a foot injury and Stackhouse confirmed after the Texas A&M loss that he would be out for at least six weeks.

Nesmith, scoring 23 points per game, had started all 14 games this season and 19 of the 32 he played in as a freshman. The Charleston, South Carolina, product has 60 made 3s and has scored at least 20 points in a game eight times this season.

• During Saturday’s game, the 1973-74 Vanderbilt men’s basketball was recognized. That squad won the SEC’s regular-season championship with a 15-3 mark in league play and 23-5 overall record. Coached by Roy Skinner and captained by SEC Player of the Year Jan van Breda Kolff, Vandy ended that season with losses to Marquette and Notre Dame in the NCAAs Midwest Regional.

• The Commodores now lead the series against Texas A&M 8-6 and are now 5-2 in games played at Memorial Gymnasium.

• Attendance on Saturday was announced as 9,076 giving Vanderbilt a season average of 8,039 fans per game after 12 home games. 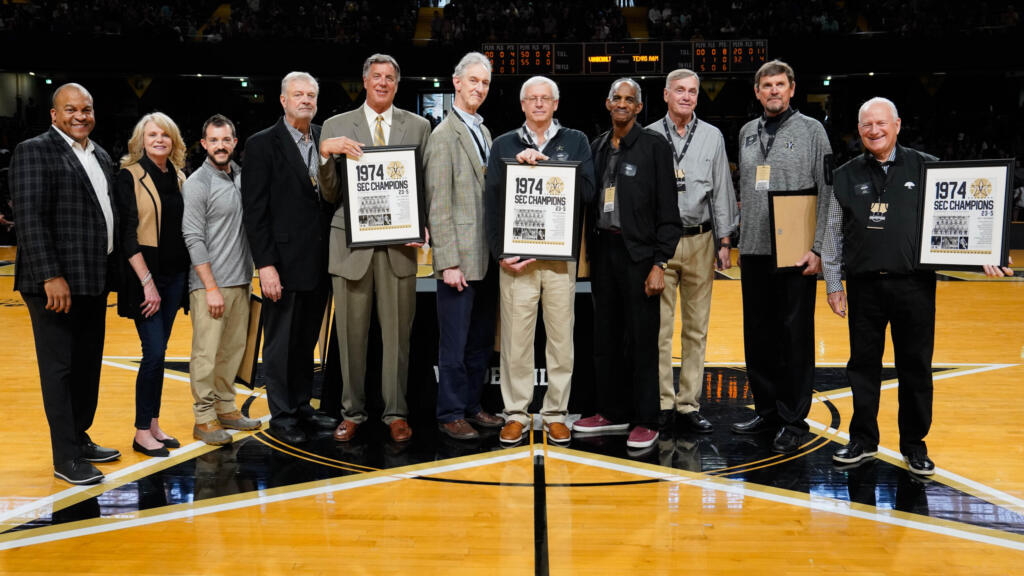