NASHVILLE, Tenn. — Family, friends, teammates and competitors have known Enrique Bradfield by a different name for most of his life.

Speed is certainly the physical attribute that has defined Bradfield’s baseball career to this point. It has also gotten the attention of Vanderbilt baseball fans who may be asking themselves, “Who is this freshman starting in centerfield?”

“We talked about a lot of different things and you could tell that he was very grounded and could jump into the mental part of the game and then jump into other human skills,” Vanderbilt head coach Tim Corbin said, recounting his first conversation with the budding star. “And he also has a fondness for the UFC like I do. So we could jump into those conversations and start talking about fighters and about the fight this weekend. He and I can go back and forth in that regard.”

Bradfield, 19, grew up in Hialeah, Florida, which is about a 30-minute drive to Miami Beach. Many of his peers gravitated toward football or other sports, but he stuck with his love of baseball. 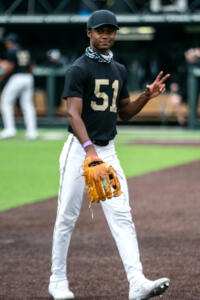 It might have been his only realistic choice growing up — his mother wouldn’t allow her son near the gridiron. His small stature had her fearing that Bradfield would, “return home in more than one piece.” His childhood was spent watching the Florida Marlins and imitating every stance in the batting order with a mini bat and home plate strategically placed in the living room.

One door in his house was relentlessly battered with a small, blue bouncy ball that Bradfield now admits probably drove his parents crazy.

“I just fell in love with (baseball),” Bradfield said. “It’s something that I always wanted to do. If you ask now what I want to do, I have the same answer as I did then: to be a Major League Baseball player.”

Enrique Bradfield Sr. played outfield for St. Thomas University – an NAIA program – in the early 1990s. A native of Panama, Bradfield Sr. moved to the United States for his senior year of high school before attending college and becoming successful in the sports industry.

Both have had a profound impact on their son.

“My mom and my dad sacrificed a great amount for me to be who I am today and where I am today,” Bradfield Jr. said. “My mom always believed in me and she always told me to reach for the stars and anything you want is possible.

“My dad, all these hours he spent with me at the field, I’ll never forget those because now when we watch a game or when we talk about Vanderbilt playing, it’s cool to see how excited he is for me.” 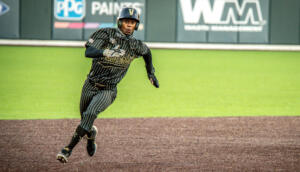 Bradfield Sr. took his son to Panama for the first time when the young baseball phenom wasn’t yet a teenager. They spent time in Panama City and Bradfield saw his father’s childhood home and community. Many of their relatives still reside in the Central American country.

Back in the States, Bradfield was making a name for himself in baseball circles. He began to travel the country to compete against the best of the best.

Eventually he started to get recruited by major Division I programs, including hometown Miami, West Virginia and Florida. But it was on a recruiting trip to Nashville – where the Bradfield’s were the only visitors on campus – that Bradfield knew he had found his college destination.

“Down the line I knew that this was the place for me to be just for the fact that I wanted to be in a family environment where you get to learn about so many different things. Then you come over here to baseball and you’re learning things that you probably might never know if you’re not here. You’re getting to create a bond with so many people from so many different places. That’s something that’s very fun to be around.”

Bradfield is just seven games into his college career, but the early returns are positive. The 6-foot-1, 160-pound freshman has hit .350, scored six runs and drove in four, drew five walks, gotten hit by a pair of pitches and is 4-for-4 on stolen base attempts while batting in the 8-hole in the lineup.

His 12 putouts on defense leads all Vandy outfielders.

Bradfield said pre-pitch he’s checking the direction and strength of the wind, monitoring the positioning of the left and right fielders and eyeballing the distance to the outfield wall. That way at the ping of the bat he knows exactly where he needs to go. 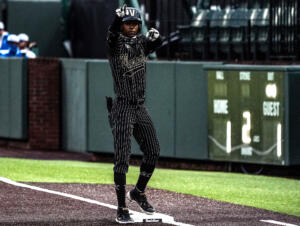 “It’s not just because of his speed, but he’s very adept with his glove. He can cover a lot of ground and he has good instincts off the bat which allows him to get even better jumps,” Corbin said. “I think that was the first thing we saw – his ability to play very, very good centerfield defense and cover the field. That’s been unique to him. He’s got a sense of the game, too. He’s a kid that has played high-level high school baseball and high-level summer baseball, too, so he’s played good competition before.”

Baseball is undoubtedly Bradfield’s top passion, but during the height of the COVID-19 pandemic in 2020 he found himself more and more fixated on mixed martial arts.

Fighters like Conor McGregor, Israel Adesanya, Derrick Lewis and Jorge Masvidal captivated Bradfield’s imagination with their training regimen – six to eight months to get ready for an event that lasts 15-30 minutes. He analyzed the mental tools those athletes claimed to use and which he could incorporate into his own routines.

And Bradfield, like the MMA fighters, has a marked lack of fear. He didn’t back down when the Commodores used boxing to train in the fall —something he said was one of the toughest workouts methods he has ever experienced. He didn’t hesitate when Corbin asked him to be the starting centerfielder for the program which was the last to win a national championship.

And he has no plans of backing down from whatever challenge comes next. 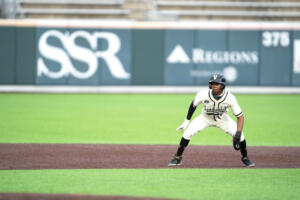 “Since I’ve been here, older guys like Cooper (Davis) and Jayson (Gonzalez) and Kumar Rocker, they’ve all played a great role in the confidence I’ve been able to build in my abilities,” Bradfield said. “The coaching staff, coach (Mike) Baxter and coach (David) Macias and coach Corbin, they’ve also instilled some trust in me and some confidence to know what I’m good at and what I can do and how my abilities can impact the game.

“I wouldn’t say there was any pressure (to come in and play right away), it was just a matter of, ‘Hey, this is the role we think you can have on the team,’ and it’s me trusting in my abilities to go out and get it done.”