NASHVILLE, Tenn. — On Nov. 29, 2019, James Jones called his brother. The Cartersville High School Purple Hurricanes, a dominant program in the state of Georgia, had lost 31-28 in the third round of the state playoffs.

Jones, an assistant coach with Cartersville at the time, told his brother Brandon Jones how it went down.

That quarterback was Mike Wright.

All I Do is Win

Wright began playing quarterback at the age of 4. His father, Wright’s youth league coach, placed his son at the position and Wright’s little brother at receiver.

Wright had been a winner ever since – until the 2020 season at Vanderbilt when the Commodores went 0-9.

“It was probably the most-humbling moment ever for me,” Wright said this week. “I had been used to winning and the whole domination aspect. It’s natural when you go from high school to college you just realize everybody is good. That (2020) year was a struggle just in general. You feel like you’re doing everything right and then the results aren’t linking up.

“That adjustment part was pretty rough. But I think in the offseason getting the mental aspect of it correct and getting that part and really adjusting has made this season so much better.” 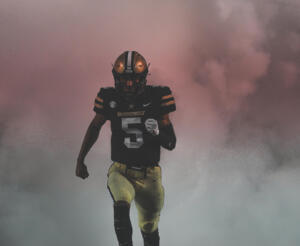 Wright made his first career start last Saturday at South Carolina and will make his second at 3 p.m. Saturday at Vanderbilt Stadium against Mississippi State. He threw for 206 yards and a touchdown against the Gamecocks and rushed for another 41 – both career highs.

Going forward the Vandy offense will be under his direction while fellow sophomore Ken Seals recovers from an injury.

“Also, he was able to, in the moment, think with clarity and make decisions to strengthen the other 10 guys on the field knowing that it was going to be his ball the next time out. So he wasn’t trying to press at all, he was just very comfortable in the role and I thought for his first time performed admirably. Mike has all the makings of a really strong player there for us.”

Being the starting quarterback is really all Wright has ever known. He held that spot at Woodward Academy for three seasons and racked up more than 3,300 yards of total offense while accounting for 50 touchdowns as a senior.

In the aforementioned game against Cartersville, Wright threw two touchdown passes – one to his brother – in the fourth quarter to erase a 28-17 deficit on the road.

“He’s a natural leader who knows what to do with the ball in his hands,” Wright’s brother Alan “Taco” Wright, now a freshman defensive back for the Commodores, said. “If he doesn’t see a throw down the field he’s going to scramble, use that speed of his and he’s just going to go. He’s a different breed.”

For Wright, he said, his mindset had always fallen in line with the community he emerged from – to succeed you get yours first.

“It sounds so cliché, but the person I was senior year of high school to now is totally different,” Wright said. “Where we kind of grew up, I don’t want to say it’s every man for himself, but it’s one of those things where you got to try to put yourself above everybody and you got to try to be the guy to separate from everything so that whole team aspect isn’t all the way there.

“(Vanderbilt) is a lead-by-example program. It’s not about saying, ‘Hey, I’m Mike Wright.’ That was the biggest thing that I had to transition from and to understand how to get a group of guys around and excel that way, too.” 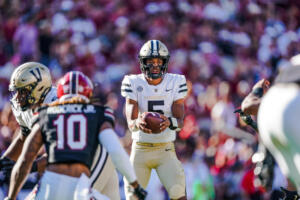 At 6-foot-4, 190-pounds, Wright’s persona stems not so much from his physical stature but from his aura. An infectious smile and radiant energy make him recognizable throughout campus and anywhere around the McGugin Center.

Brandon Jones, one of Vanderbilt’s player personnel analysts, has grown close with Wright since the latter arrived on campus. The former Ohio University quarterback said Wright’s personality is one of his biggest strengths.

“He never meets a stranger. He can transition from speaking to kids all the way up to the elderly. It’s just contagious,” Jones said. “He’s well-versed, knows how to handle himself with various crowds. So when you step into a huddle you have various walks of life in that one huddle that’s why he can relate.”

Wright admits that one of the challenges of being moved into the starter’s role Oct. 11 was having to re-acclimate himself to the No. 1 offense. While he had prepared every day to be the starter regardless of where his name fell on the depth chart, developing chemistry with those who see the most playing time on Saturdays is difficult when practice time is spent with backups. 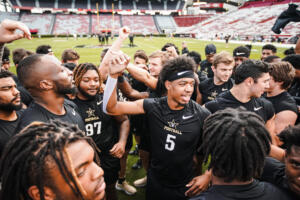 So Wright made sure to try to accelerate that bond already this week by meeting on his own with the running backs, the wide receivers and the offensive line to review the loss to South Carolina and start getting ready for Mississippi State. He also gave himself some honest criticism of continuing to understand how he doesn’t have to do it all on his own.

“It’s understanding to make the play when it presents itself and you don’t always have to be the one. You got amazing guys around you,” Wright said. “Make sure that they have the ball in their hands. They can do something with it just as well or better than you can. I don’t have to have that pressure like, ‘We need two yards so I got to be the one to do it,’ when I got a (running back) Rocko Griffin in the backfield.

“It’s as simple as that. It’ll come with learning.”

Before getting married, Michael Wright Sr. and Lakisha Wright grew up in different neighborhoods in Memphis, yet didn’t meet until they were both students at the University of Tennessee. Wright Sr. took a job as an electrical engineer with Georgia Power and he and Lakisha have been in and around Atlanta ever since.

Lakisha, working toward a doctorate in education, is an asistant principal at Fickell Elementary School. Her eldest sons Mike and Alan are Commodores, but, Mike said, twin daughters Ava and Mya (10) rule the roost.

“Whatever they got going on we do that first,” Mike Wright laughed.

The family of six spends hours video chatting on the phone and sharing dance moves and musical tastes. Wright Sr., Lakisha and the girls now spend Saturdays watching Vandy football and the new starting quarterback for the Dores.

“My brother is my role model. Everybody picks a celebrity or athlete – I look at Mike,” Alan Wright said. “Ever since I was younger I was always out there in the yard with him. We used to be out there at 2 o’clock in the morning and he would set up these little lights and he’d be out there throwing all the time.

“He told me how to watch film, how to look at defenses and taught me the game of football. I love him to death. That’s my best friend.”

A human and organizational development major minoring in business, Mike Wright said he has a peaked interest in a career in sports agency when his time on the field is done. But those days are a long way away.

“He’s always got that energy. You never see him down – even if he is, you’re not going to know. He’s the same person every time. When he’s up, he’s up and when he’s down he’s still up,” Alan Wright said. “He was ready to play (at South Carolina), he had his head on straight, he was focused – he came into it that week and took it like he had every other day.

“He was calm, he wasn’t nervous or anxious like everybody thought he would be. He went out there and balled.” 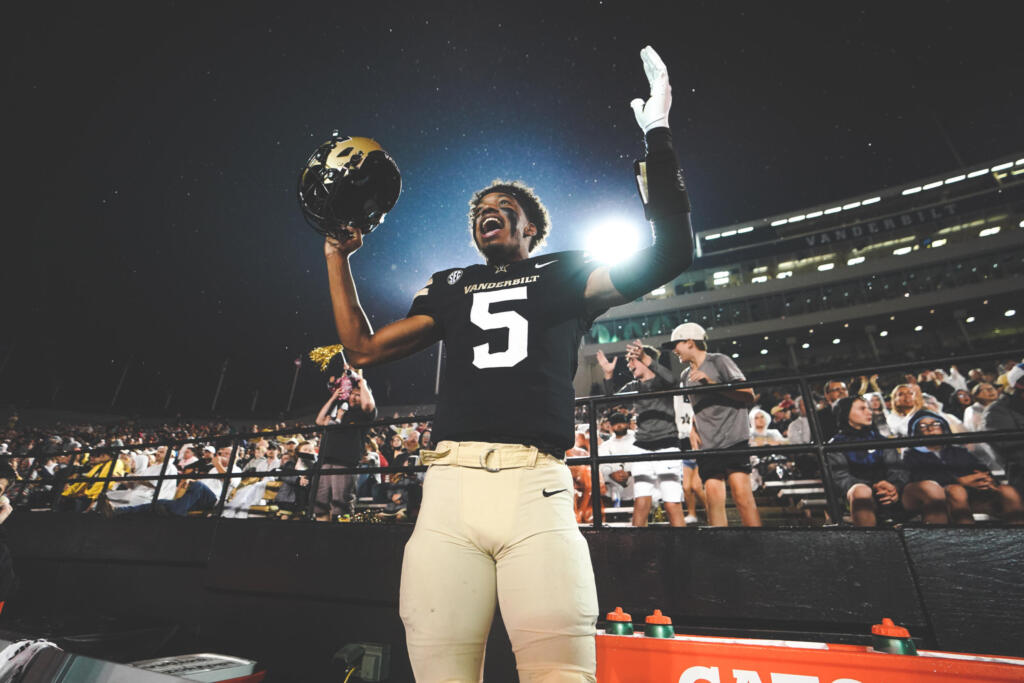