Strength in the Secondary

Commodores have experience and depth at defensive back

NASHVILLE, Tenn. — Cornerback? Safety? How about just defensive back?

“The way that we look at the secondary is we want to get as many long athletes in here as we can and put the best five players out there,” Vanderbilt defensive coordinator Nick Howell said. “I would say, ‘DB.’ Let’s put our best five DBs out there in the best combination that we can.”

Howell and defensive backs coach Dan Jackson go into the 2022 season with plenty of experienced defensive backs on the Vandy roster. The Commodores return members of the secondary who combined to make 148 tackles and four interceptions in 2021. 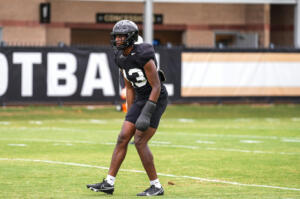 “We’ve got a lot of numbers in the room so it’s kind of fun to be able to mix and match every day who’s going to get the opportunities and try to be able to maximize different situations,” Jackson said.  “Our guys are thinking, they’re processing at the same time that we’re building techniques and fundamentals. But I love the depth – and it also creates competition which every day it’s another guy stepping up. That’s going to do nothing but elevate the floor of the room.”

Because of Vanderbilt’s base defensive scheme, it’s common to see the Commodores shifting into different roles and moving around to different parts of the field during preseason practice, the 13th of which was held Friday morning. Worship had generally been aligned at safety for much of camp, for instance, but moved toward the line of scrimmage Friday while sophomore CJ Taylor played alongside De’Rickey Wright on the back end.

Wright, a former four-star prospect who made 24 tackles in eight games last season, has been a standout throughout camp despite wearing a cast on his left hand to protect a minor finger injury. John Howse and Steven Sannieniola have also had opportunities at the safety spots.

At cornerback, Mahoney has been on the opposite side of the field of sophomore Tyson Russell. Russell made 15 stops as a true freshman in 2021.

Jeremy Lucien, a transfer from Connecticut who made 29 stops and picked off two passes last season, will also factor heavily into the cornerback rotation. Justin Harris, BJ Anderson and Marlen Sewell have been involved in the two-deep rotation playing with both the first-team and second-team units.

“Lucien adds a calming presence for me a little bit,” Jackson said. “He’s played a lot of football – he’s really the most-experienced guy in terms, of playing time, in the room. So he comes in, he understands how fall camp works, he understands different coverages, different techniques.

“He just adds such a level of maturity in the meeting room. Our young guys can lean on him on how to do things. He does a good job with staying positive, too.”

Vanderbilt ranked 114th nationally in 2021 by allowing 264.2 passing yards per game and ranked 125th by giving up 10.05 yards per completion. It hopes to drastically improve those numbers by having a cupboard full of defensive backs apt at playing multiple spots in the secondary.

Those that can justify they are up for that task will take the field Aug. 27 at Hawai’i.

“I really think these next couple weeks prior to Game 1, there’s still a lot of competition and there’s still a lot of guys battling out for the reps,” Jackson said. “So we’ll see how it shakes out. The guys that are ready and game-ready and can prove that the next couple weeks, I’ve got no issue rotating guys. Fresh players are the best players.”