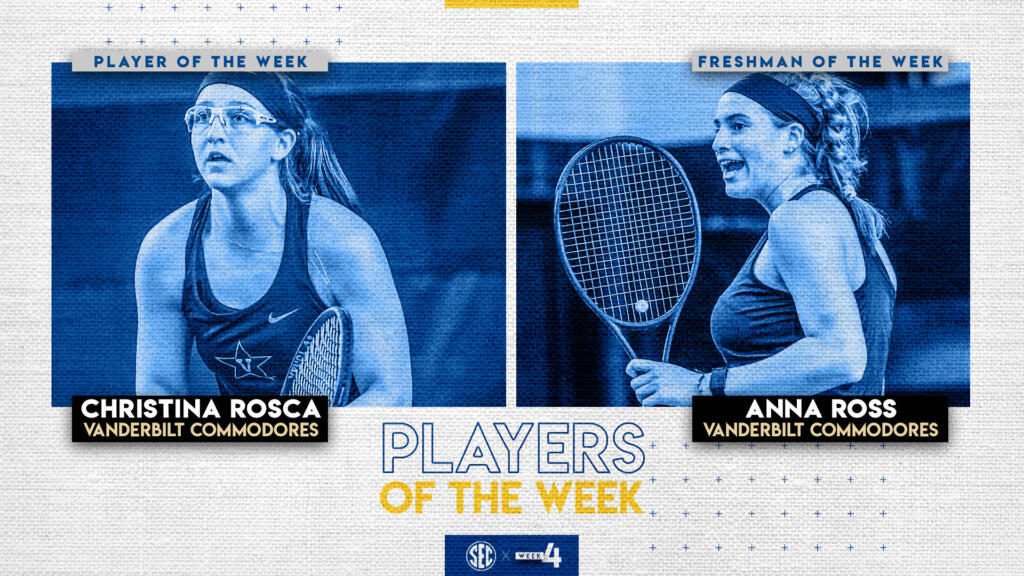 Ross has earned a stellar freshman campaign. She boasts a two-match winning streak and is currently undefeated at home (3-0).

In doubles, Ross has been a strong addition to the Commodore squad. The duo of Ross and senior Emma Kurtz is 4-2 in doubles play and currently ride a two-match win streak after winning against Ohio State in a tiebreaker.

In this week’s singles match, Ross played a crucial role by defeating Ohio State’s Kolie Allen 6-4, 6-1 to push the Commodores into the lead over the Buckeyes 3-2.

“Wow, I am so grateful to receive this recognition,” Ross said. “I can’t wait to face the challenges ahead with my amazing teammates and incredible coaches.”

Competing at primarily the No. 1 and No. 2 spot, Rosca has earned a strong start to her senior campaign.

Rosca boasts a 4-2 dual match record including two victories over ranked opponents. Against Ohio State, Rosca earned the upset over No. 8-ranked Shiori Fukuda 6-4, 2-6, 6-4 to clinch the match for the Commodores to claim a gritty 5-2 upset over the Buckeyes.

Sunday’s victory marked the Dores’ first ranked win of the season and Rosca’s first clinch of the year.

“I’m so thankful to have been able to clinch the win on Sunday for the team. It was a great stepping stone for us as we go into SEC play,” Rosca said. “This is the first time I’ve been named the player of the week so I’m grateful to receive it and hope to keep the same level of play up for next week.”

Vanderbilt kicks off conference against LSU on Feb. 28.