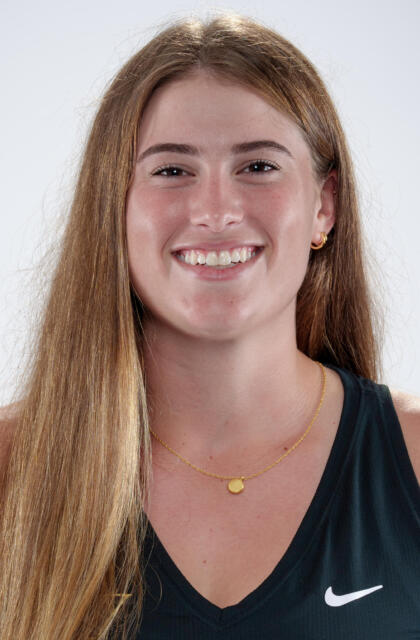 As a Junior (2021-22)
• 14-14 overall record in singles play
• 20-13 overall record in doubles play
• Led the team at No. 1 singles and No. 1 doubles the entirety of the season
• Recorded five wins over nationally ranked opponents
• Reached a career-high singles ranking of No. 37 in February
• Clinched three victories for the Commodores, including at rival Tennessee (April 8, 2022)
• With teammate Holly Staff, went 10-4 at doubles, including 8-2 in dual matches
• Earned at large bid to NCAA Singles Championships
• Elected to represent Vanderbilt with Staff at NCAA Doubles Championships
• Advanced to the NCAA Doubles Championships quarterfinals, recording wins over No. 15 Notre Dame and No. 8 Old Dominion in the process
• Season ended in a three-set tiebreak against top-ranked NC State (4-6, 6-4, 10-6)
• Named to All-SEC Second Team
• Earned All-American honors advancing to the quarterfinals of the NCAA Championships
• Was named the Ohio Valley regional award winner of the Arthur Ashe Leadership & Sportsmanship honor

As a Sophomore (2020-21)
• 8-11 overall record in singles play
• 12-9 overall record in doubles play
• Played anywhere from No. 1 to No. 4 singles while pairing with Holly Staff at No. 1 doubles
• Went a perfect 4-0 at No. 1 singles
• Defeated one ranked opponent on the season, topping Miami’s No. 87 Daevenia Achong 6-2, 6-3
• Clinched two victories for the Commodores on the year
• Ranked as high as No. 18 in the ITA doubles rankings with Staff
• The two topped four ranked foes, including a second-ranked duo from Florida, a 16th-ranked duo from South Carolina, a 25th-ranked duo from Tennessee and a 28th-ranked duo from Arkansas
• Closed out six doubles points during the campaign

As a Freshman (2019-20)
• 12-9 overall record in singles play
• 13-11 overall record in doubles play
• Clinched the Dores’ first dual match of the season over Penn
• Undefeated at home during dual matches (3-0)
• Competed primarily at No. 4 in the lineup
• Earned 12 doubles victories with partner Emma Kurtz
• Remainder of season cancelled due to coronavirus outbreak on March 14