Brown, a product of Nashville, was named Third Team All-America as a senior after posting career receiving marks in 1979. He topped all league receivers with 52 catches, good for 786 yards and three touchdowns during the season.

Brown’s season was topped by three 100-yard receiving games, including a 175-yard output versus Ole Miss.

Brown also was a dynamic returner for the Commodores. He remains sixth on team’s all-time leaders for kickoff returns and fifth in punt returns. 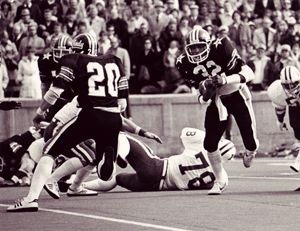 Brown also is tied for second all-time with three returns for touchdowns. His 100-yard kickoff return against Ole Miss in 1977 remains the longest in Commodore history.

After finishing his senior season, Brown played in the Blue-Gray Classic and Senior Bowl.

He played three seasons for the New England Patriots and one year each for the New York Jets and Cleveland Browns.