A native of nearby Franklin, Clarence “Pete” Gracey was an anchor on both the offense and and defense fronts.

In 1932, he became the last of 13 All-America players mentored by legendary Coach Dan McGugin. While the last of McGugin’s prize pupils, Gracey also ushered a decade of superb Vanderbilt centers, including Carl Hinkle and Bob Gude. 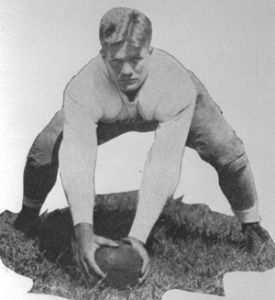 In Gracey’s final season, he opened holes for such backs as Dixie Roberts and Larry Burton as a center. A possible undefeated season ended in the finale when the ‘Dores fell to Alabama.

A versatile athlete, he also lettered in baseball and basketball.