On the Leiter Side of History

No other Gamecock would get that far the rest of the day.

Leiter retired 27 straight hitters after that to throw a no-hitter at Hawkins Field. The sophomore threw 124 pitches, the last of which blew by a swinging Wimmer for the final out in a 5-0 Vanderbilt win.

“It’s a really fun experience for our whole team,” the mild-mannered Leiter said of his historic day. “I think its something really special to experience with our team. I’m kind of just grateful for that, to be honest.”

Leiter had never faced an SEC team before. He had never thrown more than five innings in a game for the Commodores. Saturday was just his eighth career start in a Vandy uniform.

The 6-foot-1, 205-pound right hander had, however, tossed a no-no before – as a senior at the Delbarton School in 2018. His father Al Leiter was there for that one.

And he was on West End on Saturday, too.

“They’re very emotional right now,” Vanderbilt head coach Tim Corbin said of the young Leiter’s parents being on hand. “To have their kid here, to be pitching like that – it’s just a special moment. Their child goes about what he does in such a mature manner that you’re glad to see him get rewarded in such a way.” 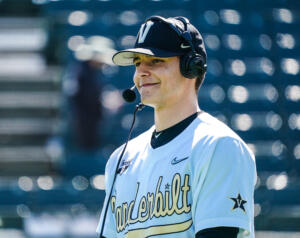 Leiter ran the count full on three batters combined over the fifth and sixth. But he seemed to get a second wind in the seventh and beyond with six more punchouts.

An electric fastball whizzed by South Carolina bats all day long – Leiter knew his off-speed pitches weren’t as sharp as they normally are.

“On a day like today where neither breaking ball is working for, really, the first six innings, I’m going to keep throwing it when I normally would until I find it,” Leiter said. “Today was honestly a little later than I would have liked. It would have made things a little bit easier if I could have thrown those for strikes early on.”

While Leiter mowed down the Gamecocks, Vanderbilt put together enough offense thanks to a pair of two-run homers from Tate Kolwyck and an RBI sacrifice fly off the bat of Enrique Bradfield. Vandy’s final three runs came in a prolonged eighth which might have cooled Leiter down a bit.

Leiter said he knew about the fifth or sixth inning he had a special performance in the works. He actually allowed himself to briefly think of the zero under the hits column on the scoreboard so he could refocus his energy on the next pitch, the next batter and the next out.

There wasn’t any discussion, either, between Leiter and Corbin and Vanderbilt pitching coach Scott Brown about an early exit.

“I probably hadn’t thrown that many pitches in my whole life,” Leiter said. “Having not experienced that it kind of got easier as things went on, in a way I guess, because I had such a good feel for the mound because I have been throwing on it for a while.

“Everything just kinda felt normal. Mechanically I was just thinking me and the glove and just stayed directional to the catcher (CJ Rodriguez). I was getting after it a little more in that last inning, of course.”

The day Leiter etched his name in college baseball history.

“To experience this with my teammates – it was a lot of our first SEC weekend in our careers here – it’s really special,” Leiter said. “It’s special. It’s really special for everybody and it’s exciting.”