Nesmith and Lee Get Their Shot

Vandy duo defined by their character as NBA debuts near

NASHVILLE, Tenn. — Those who were closest to them knew this day would come. But it was more because of their attributes off the basketball court than on them.

Aaron Nesmith and Saben Lee saw their dreams come true last week during the NBA Draft – Nesmith was chosen 14th overall by the Boston Celtics while Lee heard his name called 38th overall in the second round. The Detroit Pistons acquired the rights to Lee after he was originally selected by the Utah Jazz.

“It’s a testament that the talent we have in our program and it’s also a testament to their handwork,” Vanderbilt vice chancellor for athletics and university affairs and athletic director Candice Lee said. “They absolutely put themselves in position to have those opportunities.”

Both Nesmith and Lee took very dissimilar routes to the NBA but will also forever be connected by their two seasons together on West End. 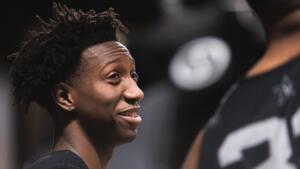 Lee arrived in Nashville in 2017 as a highly-touted point guard from Phoenix, Arizona. The son of former Florida State football star Amp Lee, the 6-foot-2, 183-pound Lee played in all 32 games as a freshman and averaged 10.6 points per game.

But in 2018, Lee was part of the wrong side of history. The Commodores won just nine games and went winless against SEC competition.

Lee, who took a business-like approach to Vanderbilt basketball day-in and day-out, finished as the team’s leading scorer with 12.7 points per contest during an up-and-down season that was overshadowed by the injury of star player Darius Garland. Shortly after his sophomore season had ended Lee sat by while Vanderbilt made a head coaching change.

New head coach Jerry Stackhouse put true freshman Scotty Pippen Jr. at the starting point guard spot and brought Lee of the bench to start the 2019-20 campaign. The second-year Vandy coach said Lee’s ability to be chameleon-like in adapting to whatever role he’s given will serve him well in the long run.

“The biggest thing for Saben to me was him being able to accept a role for my vision of how we wanted to play and how we needed to move forward,” Stackhouse said. “Knowing that we were coming in new we knew that we needed some continuity from that point guard position and we wanted to be young. 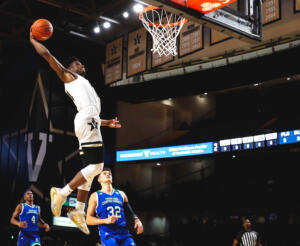 Two years ago Nesmith stepped on campus as a bit of a forgotten piece to a recruiting class that included Garland and Simisola Shittu. The 6-foot-6, 213-pound shooter was a complimentary role player before moving into the starting lineup when Garland went down to injury.

Nesmith became the focal point of the Vandy attack and was on a scoring barrage through 14 games to the tune of 23 points per contest and a whopping 60 made 3s. On Jan. 8 in Auburn, Alabama, however, the Charleston, South Carolina, native injured his foot and would never play for Vanderbilt again.

But he also never left his team.

“With him going down it could have easily been a, ‘Woe is me, here we go again type of attitude,’ ” Stackhouse said. “But as a staff and as coaches and with (Nesmith) as the leader, we still rallied around that we still had enough to do some things to get it done.

“As the season went on things started to come together with that group after having to change gears after the very first game of conference play. (Nesmith) loading up that (medical knee scooter) and coming on and being in those guys’ ears and still being that vocal leader that they needed, it was huge. I felt like we probably should have won a couple more games, but I don’t think we have an opportunity to win those and then win the ones that we did if it wasn’t for his role and still keeping that group together.”

She said that even though Nesmith was dealt his injury before the start of Vanderbilt’s spring semester he remained enrolled in classes and finished out the term. And Roche explained how much Lee valued his time management – he prioritized his academic work because to him that equated to more hours to improve his basketball game.

Roche took many calls from NBA front offices in regards to the character of Vandy’s two promising prospects.

“Both of them are just two of the most-respectful kids I’ve ever worked with,” Roche said. “If I could name any two people who would do something I asked of them right away it’s them.”

Director of player personnel James Strong knows all about he rigors of being a Vanderbilt student-athlete. He played for the Commodores from 1997-2000 before beginning his career in the coaching profession.

The former Vandy guard said what the star duo may not know is how much their demeanor and character helped set the standard for the future of Vanderbilt basketball. 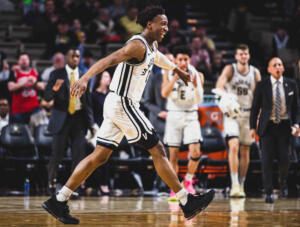 “Those two guys buying in – it’s easy to buy in when your coach is Jerry Stackhouse, I get that, but still I think their leadership and the stuff off the court helped us this year,” he said. “The tone and the culture that we set last year, fighting through adversity and dealing with injuries and not winning any SEC games the previous year and a new staff and totally new system, what they helped us establish last year has made it a lot easier.

“They were very impactful on this year.”

The NBA season is scheduled to start Dec. 22 and with that will come the next chapter of the careers for Lee and Nesmith. Both hope to make their professional debuts sometime during the 2020-21 season in what will be a tremendous moment of pride for those that were with them through the ups and down of the last few seasons.

It will also give Commodore Nation much to smile about.

“I think you could look at both of them and use them as great examples of perseverance, teamwork and commitment,” Candice Lee said. “Now they have the opportunity to play on the biggest stage and I couldn’t be happier for them.”