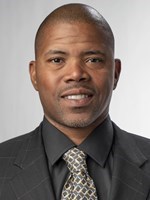 Former Commodore standout James Strong returned to West End to join head coach Jerry Stackhouse’s staff and is in his first season as the director of scouting and recruiting in 2021-22. He spent the past three seasons as Vanderbilt’s director of player personnel.

Strong, who previously spent eight seasons on Rick Byrd’s staff at Belmont, played for the Commodores from 1996-2000 and spent six seasons as a member of Kevin Stallings’ coaching staff from 2001-06.

Strong was a four-year letter winner for the Commodores (1997-2000), leading Vanderbilt to three postseason appearances. As a junior, Strong led the SEC and established a Vanderbilt single-season record in steals (77). He ranks fourth on the Commodores’ career steals list (209) and served as team captain as a senior.

While at Belmont, Strong worked with five of the most productive and decorated players in program history — Ian Clark, Kerron Johnson, J.J. Mann, Craig Bradshaw and Austin Luke. Clark currently plays in the NBA with the New Orleans Pelicans.

Strong made a tremendous impact for Belmont, as his contributions in everything from scouting reports and winning attitude to defense and guard development helped Belmont reach four NCAA Tournaments during an eight-season stretch. The Bruins posted a record of 195-71 during his tenure, won six consecutive conference championships, received top 25 poll votes eight out of nine campaigns, earned victories over North Carolina, Marquette, Stanford, Georgia, and nationally-ranked Murray State, posted the nation’s longest home court win streak and road win streak, and reached the quarterfinal round of the postseason NIT.

Prior to his time at Belmont, Strong spent five seasons as an assistant coach at Furman, where he served as associate head coach prior to the 2010-11 season. The Paladins completed one of their finest seasons in program history, posting a 22-11 record and earning an invitation to the 2011 CollegeInsider.com Postseason Tournament — the program’s first postseason appearance since 1991. Furman’s 22 victories marked the second-highest single-season total in school history, and most in 30 years. Perhaps most notably, the Paladins defeated South Carolina, 91-75, and won at eventual Southern Conference tournament champion Wofford. Furman senior Amu Saaka earned all-conference honors. Strong shouldered great responsibility at Furman, including on-the-floor teaching, player development, scouting and recruiting.

Originally from Huntsville, Alabama, Strong earned a bachelor’s degree in human and organizational development from Vanderbilt in 2000.

He and his wife, Tami, have two children—Kayla and JP.