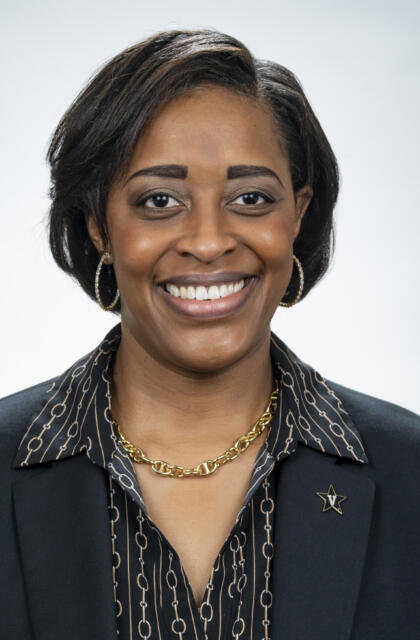 Named to the position on May 21, 2020, Lee is Vanderbilt’s first female athletic director and the first Black woman to head an SEC athletics program.

A former member of the Vanderbilt women’s basketball team, Lee has earned undergraduate, masters and Ph.D. degrees from Vanderbilt Peabody College of education and human development and has been an inspirational leader in athletics and the wider Vanderbilt community ever since arriving on campus as a first-year student in 1996.

Lee began her athletics administration career at Vanderbilt in 2002, serving first as an academic adviser and then compliance director. Working under the late athletic director David Williams, Lee was named the department’s senior woman administrator in 2004, a responsibility she held until 2020. She also assumed the title of deputy athletic director in 2016, overseeing the day-to-day operations of the athletic department and serving as the sport administrator for football and women’s basketball.

A team captain, four-year letter winner, and five-time SEC Academic Honor Roll selection as a member of the Vanderbilt’s women’s basketball team, Lee battled through knee injuries and helped lead the Commodores to an SEC Tournament championship in her final season (2002). She graduated from Vanderbilt with a bachelor of science degree in human and organizational development in 2000, received her master’s degree in counseling in 2002 and her doctorate in higher education administration in 2012.

A model student-athlete at Bob Jones High School in Madison, Alabama, she was named to the 2022 class of the Huntsville-Madison County (Ala.) Athletic Hall of Fame.

Beyond her duties at Vanderbilt, Lee is a leader in college athletics at a national level. She serves on the Southeastern Conference’s Council on Racial Equity and Social Justice and on the executive committee of the Black Athletic Directors Alliance, an organization created in 2020 to promote the growth, development and elevation of Black athletics administrators. She formerly served as a member of the NCAA Women’s Basketball Rules Committee and as chair of the NCAA Division I Women’s Lacrosse Committee and of SEC Senior Woman Administrators.

Lee has been recognized by peers and media as one of the leading young administrators in college athletics. In 2022, she was named Athletic Director of the Year at the Black Student-Athlete Summit. The Sports Business Journal named her to its college sports “Power Players” list in 2019, and Adidas named her to its “NEXT UP” class in 2018. In addition, Lee was the recipient of the John McClendon Scholarship for Black administrators in 2017.

Lee has also built deep roots as a longtime fixture in the Nashville community. She currently serves or has served on the boards of directors for the Tennessee Sports Hall of Fame, Nashville Sports Council, YWCA of Middle Tennessee and The Family Center. She was named a 2019–20 fellow of the Tennessee Independent Colleges and Universities Association’s executive leadership institute and is a graduate of the 2012 class of Leadership Nashville and the 2012 Vanderbilt Leadership Academy. In 2021, Lee received Peabody College’s Distinguished Alumna Award. Members of Vanderbilt’s student-athlete advisory committee awarded Lee their inaugural staff appreciation award in 2002 in recognition of her leadership through the COVID-19 pandemic.

Lee is committed to a vision that one of the world’s preeminent academic institutions in one of the nation’s best cities can thrive in the most competitive athletic conference in college sports. Working in partnership with Chancellor Daniel Diermeier, she led development of the Vandy United Fund in 2021.  The $300 million investment in athletics reflects the university’s commitment to empowering student-athletes to realize their full potential on and off the field.

In 2020-21, Vanderbilt finished with an overall NCAA Graduation Success Rate of 97, the highest of any SEC program, for the sixth straight year. During the 2010–22 season, student-athletes also exceeded a 3.0 grade-point average for the 16th straight year.

Lee is married to Sean Lee, the executive director of a Middle Tennessee housing authority. They have an adult son, Andrew.