A committee of faculty athletic representatives from SEC universities chose Markel and female recipient Ann Elizabeth Tebow of Texas A&M to each receive a $10,000 postgraduate scholarship, provided by the SEC.

“Cody epitomizes the complete SEC student-athlete experience by making the world a better place with his dedication to the community and the classroom,” SEC commissioner Greg Sankey said. “I congratulate Cody, his family and Vanderbilt University on this prestigious recognition.” 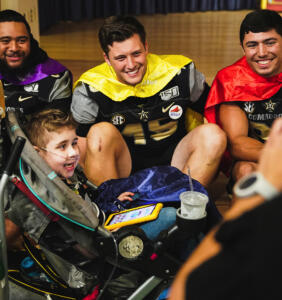 Through Turner’s Heroes, Markel and many of his Commodore teammates also have worked to uplift the spirits of pediatric cancer patients and aid their families by staging superhero-themed activities at treatment centers.

“It’s truly remarkable that, even beyond his dedication to football and the classroom, Cody worked so diligently to create a non-profit in Turner’s memory,” Lee said. “The joy he brought to so many kids and families at Vanderbilt Children’s Hospital and the funds he raised for pediatric cancer research are rewards in their own right, but this recognition from the SEC is so well deserved. He has always used his platform to make a difference for others.

“I can’t wait to see how he does it in the future.”

With Markel’s guidance, Turner’s Heroes has raised more than $110,000. More than half of that – $70,000 – was raised during an 82-hour fundraising drive last September centered around Vanderbilt’s home football game against LSU.

Vanderbilt football head coach Derek Mason praised his former tight end, who played in 23 career games as a non-scholarship member of the team.

“Cody Markel is the real deal, just a tremendous representative of the Vanderbilt football team who has a very bright future ahead of him,” Mason said. “What Cody has done over the last 18 months to honor Turner Cockrell is an incredible testament to his character. He makes all of us extremely proud.”

The Brad Davis Award is the third major accolade Markel’s earned in the 2019-20 academic year. In April, he received the Jim Robins Award and Community Service Award at Vanderbilt Athletics’ annual student-athlete recognition banquet. The National Football Foundation’s Middle Tennessee chapter presented him with the C.R. Bickerstaff/Bill Pace University Scholar-Athlete of the Year Award in February.

Markel was active in community service through his Vanderbilt studies. Prior to forming Turner’s Heroes, he served as captain of the football team’s 2018 Dance Marathon effort that raised more than $10,000 for the children’s hospital on campus. Additionally, Markel contributed as a volunteer at Alive Hospice in Nashville.

Markel, a six-time dean’s list recipient, earned a bachelor’s degree in political science and medicine, health and society in December. His long-term plans include law school.