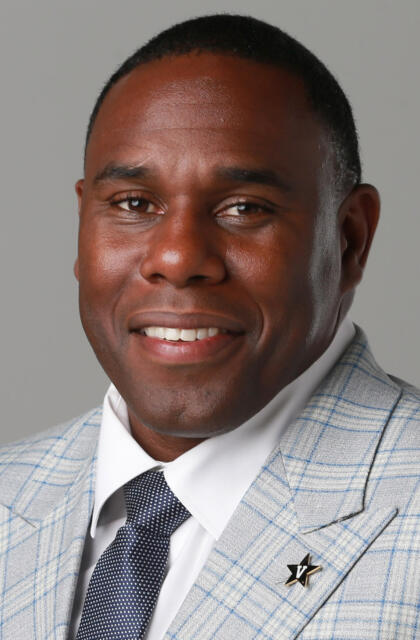 The 2020 season is the seventh for head coach Derek Mason, who continues to keep the Commodores trending upward both on and off the field.

The always energetic, fiery and fearless leader is only the second head coach on West End to lead the Commodores to multiple bowl games, while more importantly, continuing to graduate his student-athletes at a conference- and national-leading rate. Since arriving on campus in 2014, the focus of the SEC’s fourth-longest tenured head coach on developing men of character and integrity not only has been highly successful, but exemplary of the program’s three pillars: Relentless, Tough, Intelligent.

In 2019, Mason’s Commodores upset a 22nd-ranked Missouri squad that was vying for the SEC East lead entering the game. The season’s offense was led by three seniors who finished their careers among Vanderbilt’s best at their positions: running back Ke’Shawn Vaughn, who rushed for 2,272 yards (third all-time) and 21 touchdowns (third all-time) in a two-year Commodore career; wide receiver Kaljia Lipscomb, who amassed 22 touchdown receptions (second all-time), 198 catches (fourth all-time) and 2,358 receiving yards (fifth all-time); and Jared Pinkney, who became the Commodores’ most productive tight end in nearly four decades with 94 total receptions, 1,327 receiving yards and 12 touchdowns.

Mason and the Commodores dedicated the 2019 season to the memory of teammate Turner Cockrell, a tight end who passed away in December 2018 after a lengthy battle against melanoma. Mason and the Vanderbilt program helped one of Cockrell’s classmates, Cody Markel, raise nearly $70,000 in a September event for the “Turner’s Heroes” initiative he formed to honor Cockrell.

The 2018 season was a banner campaign for Vanderbilt under Mason’s direction, with the Commodores capped a six-win regular season with their third straight victory over rival Tennessee and fifth in seven years. That victory propelled the Dores to bowl eligibility for the second time in three seasons as the program faced off against Baylor in the Texas Bowl. Vaughn rushed for 243 yards and two touchdowns on just 13 carries against Baylor while showing outstanding breakaway speed with three runs of 66 yards or longer.

The Commodores averaged 411.2 yards/total offense per game in 2018, the program’s second-highest average since World War II. They also averaged 28.5 points/game, fourth most since the 1940s, and quarterback Kyle Shurmur graduated as a 45-game starter and sole possessor of several program records, including career passing yards (8,865) and career touchdown passes (64). Vaughn produced one of the finest seasons ever by a Vanderbilt ball carrier, as the Nashville native rang up 1,243 rushing yards, second most in a single season at Vanderbilt and third in the SEC. Vaughn’s 7.9 yards/rush ranked first among all SEC players and eighth nationally, with his 12 rushing scores ranking third in the league.

Vanderbilt’s defense flew to the ball under first-year coordinator Jason Tarver in 2018. The Commodores produced 22 takeaways in 2018, the most for the program since 2013. The unit also hauled in 13 interceptions, tops during the Mason era.

Two Commodores were tabbed in the record-breaking 2019 NFL Draft held in Nashville. In front of his hometown crowd, cornerback Joejuan Williams was selected 45th overall by the New England Patriots, the highest-picked Commodore since Jordan Matthews went 42nd overall in 2014. Offensive lineman Justin Skule was selected by the San Francisco 49ers in the sixth round. Williams and Skule were the fifth and sixth Commodores, respectively, selected in the NFL Draft since Mason’s arrival. Additionally, five more Vanderbilt student-athletes from the 2018 squad signed rookie free agent contracts with NFL teams, with rookie fullback Khari Blasingame eventually becoming the lead blocker for Tennessee Titans’ All-Pro running back Derrick Henry.

Off the field, 59 student-athletes earned a grade-point average of 3.0 or higher, including 18 on the dean’s list (3.5 or higher) and four with a perfect 4.0. Forty Commodores landed on the SEC Academic Honor roll, and Vanderbilt scored a 991 in the NCAA’s Academic Progress Rate scores, the highest of any SEC program and fourth-best among Power Five schools. Three players studied abroad in France, another example of the full student-athlete experience at Vanderbilt. Blasingame also became the male receipt of the Arthur Ashe Award.

Five of Mason’s Commodores have been accepted into the prestigious Vanderbilt Medical School, in addition to more than 240 SEC Academic Honor Roll recipients and over 110 dean’s list honorees.

Mason’s administration of the Vanderbilt program also includes innovation. He has been instrumental in creating a summer internship program for Commodore student-athletes that is one of the most unique in the nation. Started in 2014 within the football team, the program has been expanded to each of Vanderbilt’s varsity squads with Mason’s staff teaming with Nashville-area businesses to provide unparalleled work experience opportunities for student-athletes. In the last five years, more than a dozen Commodores have participated in study abroad programs in the summer, including linebacker Kenny Hebert, tight end Braden Kopp and linebacker Andre Mintze studying in 2019.

Prior to the 2019 season, Mason added acclaimed veteran SEC running backs coach Tim Horton and Devin Fitzsimmons in from the NFL’s Detroit Lions to direct the Commodore special teams and tight end corps.

In addition to Vaughn’s superb 2018 rushing campaign, fellow running back Ralph Webb concluded his career in 2017 as the leading rusher in school history and seventh-leading rusher in SEC history. Webb set a bushel of school single and career records, including 4,173 rushing yards, 931 rushing attempts and 32 rushing touchdowns.

Mason guided Vanderbilt to its eighth postseason appearance in 2016 with a trip to the Independence Bowl. The Commodores finished the regular season 6-6, including four wins over the final six games. The season featured marquee SEC victories over Georgia, Ole Miss and No. 24 Tennessee. The Commodores closed the regular season by scoring a combined 83 points in wins over the Rebels and Volunteers.

The architect of Stanford’s vaunted 3-4 defense, Mason was elevated to the Cardinal’s defensive coordinator in 2011 after leading the program to a pair of Rose Bowl appearances and consecutive Pac-12 titles. Mason’s elite defensive units at Stanford ranked among the NCAA’s best in defensive efficiency for three consecutive seasons. While facing seven ranked opponents and one of the nation’s toughest schedules in 2013, Stanford ranked third nationally in rushing defense (89.4 yards), 10th in scoring defense (19.0 points) and 16th in total offense (343.1 yards). The Cardinal was also one of only five teams to allow less than 100 rushing yards per game in 2013 and ranked fifth nationally with 44 sacks and seventh with 109 tackles for loss.

In 2012, Mason was a finalist for the Broyles Award, given annually to the nation’s top assistant coach, after directing a Stanford defense widely considered the program’s finest unit ever.

Mason’s leadership paved the way to a historic defensive output, breaking Stanford’s single-season record with 57 sacks and pacing the Pac-12 in scoring defense, total defense and rushing defense, and helped the Cardinal to an 11-2 season capped off with a Rose Bowl title. In 11 of 14 games in 2012, Stanford held its opponent to 20 or fewer points, including a 14-point effort in overtime win at top-ranked Oregon, who led the FBS with a 54.8 scoring average. The 2012 Stanford defense held eight of 13 opponents under 100 yards rushing, and in a string of three consecutive games, the Cardinal recorded three of its top-10 single-game rushing defense performances in team history.

Prior to his arrival in Palo Alto, Mason served as an assistant defensive back coach for the Minnesota Vikings from 2007 to 2009. He played a vital role in the team ranking sixth in total defense in 2008 and 2009 as the Vikings won NFC North titles each season. Mason was introduced to the NFL coaching circles through the Minority Fellowship program. He joined the Vikings staff in 2007, where he worked with defensive backs coach Joe Woods.

Before joining the Vikings, Mason tutored wide receivers at Ohio under Frank Solich, helping the Bobcats improve from 4-7 in 2005 to a 9-5 campaign and GMAC Bowl appearance the following year. Mason spent the 2004 season as wide receivers coach at New Mexico State, where the Aggies led the conference in passing.

During the 2002 campaign, Mason mentored receivers and assisted with special teams at Utah. The Utes featured the NFL Draft’s No. 1 overall pick in quarterback Alex Smith and wide receiver Paris Warren, an eventual seventh-round pick.

Mason’s move to Utah came after a three-year stint at Bucknell (1999-2001) in which he gained his first experience as a defensive assistant coach. At Bucknell, Mason served as defensive backs mentor for three straight winning Bison squads.

Mason’s first three collegiate positions came as an offensive assistant at Mesa (Ariz.) Community College in 1994, Weber State in 1995-96 and Idaho State in 1997-98.

Mason earned a bachelor’s degree in criminal justice from Northern Arizona in 1993. A native of Phoenix, Mason was a standout football player at Camelback High School.

Derek and his wife, LeighAnne, have two daughters, Makenzie and Sydney.

Stanford – 2011-12 (Associate Head Coach • Defensive Coordinator) • Finalist for 2012 Broyles Award as nation’s most outstanding assistant coach … Stanford goes 23-4 overall in Mason’s first two years as coordinator, wins 2012 Pac-12 title, captures 2012 Rose Bowl over Wisconsin, and plays in the 2011 BCS Fiesta Bowl … Mason’s 3-4 attacking defense ranked among the NCAA leaders in both seasons … In 2012, the Cardinal defense topped the nation with 57 quarterback sacks, ranked second in tackles for loss, fifth in rushing defense and 11th in scoring defense … Stanford also paced the Pac-12 in scoring defense, total defense, rushing defense and sacks … The 2012 defense also held eight opponents under 100 rushing yards and limited high-powered Oregon to just 14 points in an overtime win … In 2011 the Cardinal was third in the NCAA in rushing defense, sixth in 3rd-down efficiency and 11th in quarterback sacks, and finished among the Pac-12 leaders in scoring defense, total defense, rushing defense and opponent first downs.

Minnesota Vikings – 2007-09 (Assistant Defensive Backs Coach) • Served as an assistant defensive backs coach for the Minnesota Vikings from 2007 to 2009, playing a vital role in the team ranking sixth in total defense in 2008 and 2009 as the Vikings won NFC North titles each season.

Ohio – 2005-06 (Wide Receivers) • Hired by former Nebraska head coach Frank Solich, Mason coached Ohio receivers for two years, helping the Bobcats improve from 4-7 in 2005 to a 9-5 campaign in 2006 that ended with a GMAC Bowl appearance.