OMAHA, Neb. — One of the more memorable scenes from the classic baseball move The Rookie, a film based on the true story of Jim Morris, is when actor Dennis Quaid first learns his fastball has been clocked faster than he’s ever thrown before.

“I think it was Fish (Vanderbilt senior Hugh Fisher) who was like, ‘You’re at 95-96 (mph).’ I said, ‘No way, you’re kidding, there’s no shot,’ ” Murphy remembers. “In my bullpens I was probably upper 80s, low 90s. When I first got on the mound adrenaline hit a little bit and and that’s where it all started.”

Murphy’s rise to prominence – especially of late – for the Commodores couldn’t have come at a more crucial time. The junior leads Vandy with nine saves going into the College World Series finals against Mississippi State starting at 6 p.m. Monday.

“My goal is to just have that one-pitch-at-a-time approach and attack the zone and lead us in the right direction,” Murphy said.

Vanderbilt (48-16) likely didn’t know what it was going to get out of the Cross Plains, Tennessee, native coming into 2021. That wasn’t really due to anything Murphy could control. 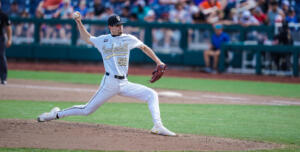 In 2018, Murphy tore the ulnar collateral ligament in his pitching arm during a summer league outing. That equated to Tommy John surgery and Murphy watching as an outsider as the Commodores won the 2019 national title.

“I don’t want to say it’s the best thing that happened to me, but coming into college I was 165 pounds. I was skin and bones,” Murphy said. “Going through that freshman year I put on 25 pounds.

“I didn’t know what arm care was, didn’t really know what the weight room was. I took some initiative from that part of my rehab. It’s basically a new body so still getting comfortable with that. Coming on the throwing program side it was slow. I had a ton of time and wasn’t really rushing back to get into the swing of things. I had basically all season and all summer and a little bit of the fall to get ready for the season.”

When Murphy finally returned to the mound, however, on Feb. 16 in Scottsdale, Arizona, the results weren’t promising. He walked two hitters and allowed a hit in a 1/3 of an inning in a sign of things to come. 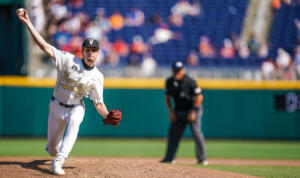 Murphy, a graduate of East Robertson High School, pitched in four games in the shortened 2020 season, walked nine hitters in two total innings and finished with a team-high ERA of 13.50.

“This past summer was the biggest thing for me. It was more of a confidence booster mentally,” Murphy said on reckoning his 2020 numbers. “I think I had more walks than I did innings pitched last year so it was tough with the season ending abruptly. I had to sit on that for a while and luckily I was able to go play summer ball in Battle Creek (in the Northwoods League) and developed some confidence there.

“First outing there was a flashback to the season, but then I started trusting myself to get back in the zone and I ended on a good note leading into the fall. The fall was pretty good for me – I maybe had two walks all of fall. I was filling up the zone and letting the hitters hit the ball. That was my approach. Let them hit it and let the defense do the work. That’s how my approach has been this past season, too. Just let them hit it.”

Part of that success can be contributed, Murphy said, to his ability to level his emotions and his breathing. A fall classroom session that focused on the teachings of Trevor Moawad and how negative thoughts translate to negative outcomes changed Murphy’s mental approach. And there hasn’t been any negative outcomes for Murphy recently.

In his last four outings he has allowed just three hits and struck out 10 over 7 1/3 innings. Oh, and he hasn’t allowed an earned run over that span.

“He’s done a good job of getting into those environments and throwing strikes and very committed strikes at that. He’s not trying to feel his way around,” Vanderbilt head coach Tim Corbin said. “You get to this level and you get to this part of the year … you’ve got kids that are marksmen. They come in and know what they are going to do. They know how to land their pitches and they do it and they do it with commitment – and that’s what Luke does.”

Luke Murphy fans the side. 🔥

We’re headed to the bottom of the tenth.#VandyBoys | #CWS pic.twitter.com/2dRkQuyXmx

Murphy, an American Studies major, comes from a family woven with athletic fibers.

All eyes from the extended Murphy family are now on the 21-year-old reliever for the Dores who has helped his team within two wins of a national championship. His four-seam fastball has been used exclusively – by his own admission – while a slider-curve (slurve) has kept hitters guessing.

Murphy also explained how Vanderbilt pitching coach Scott Brown has helped Murphy better understand and better use his body. Making mechanical adjustments and learning how to make those adjustments, he said, has been pivotal.

As for the future, Murphy is only focused on the immediacy of what’s at stake the next few days and not the very-real possibility of a professional baseball career.

“I really don’t think what’s for me next because technically I’m still (classified athletically as) a freshman. I still have a lot years to go and a lot of things to think about with my development,” he said. “Just staying in this moment, staying with what we’re doing now with the team. The team goal is to end up on the top of the mountain.”