NASHVILLE, Tenn. — Jack Bulger is a product of his opportunities – opportunities he has taken full advantage of throughout his youth.

Bulger didn’t grow up part of a baseball family. He wasn’t immersed in a baseball-crazed community. But somewhere along the way he found the game while the game symbiotically found him.

“Maryland is not exactly known for their baseball talent,” Bulger said “I have amazing resources back home and I have a bunch of guys that really care for me and really open up their facilities and help me train.

“You have to be creative a little bit in Maryland and try everything you can to get some training in when you can.”

Hitting .314 with 20 RBIs and four home runs, Bulger has been in the middle of the lineup for nearly all of Vanderbilt’s 35 games this season. His inclusion as an every day player came quickly and the freshman has never looked back.

Three pitches into the 2021 season, Vanderbilt lead-off hitter Cooper Davis swung and fouled a pitch off his own face in the bottom of the first inning at Hawkins Field in a game against visiting Wright State. While medical staff rushed to attend to Davis and a stunned Vandy team looked on, Bulger was suddenly grabbing a bat and heading to the plate to finish Davis’ at-bat.

Two pitches later Bulger had struck out in his college debut.

“That first at-bat was definitely a welcome-to-Vandy kind of thing,” Bulger laughed. 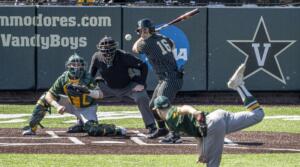 Bulger finished that contest 0-for-4 with two strikeouts. Results have been much better since.

Bulger has also held his own in left field with 10 putouts. That note is a bit more impressive considering Bulger is a catcher by trade and hadn’t played much outfield during his entire baseball career.

“It’s been difficult. I’m just trying to be an athlete out there,” he said. “I’ve relied on a bunch of the older guys a lot. (Davis), (Isaiah Thomas) and even Enrique (Bradfield) just because he’s so good out there. And then (assistant coach Mike Baxter) has helped me out a lot with the fundamental stuff that I’ve really been lacking growing up.

“Left field isn’t the easiest place to play at Vanderbilt because of the all the odd nooks and crannies out there. I’ve just been trying to get as many reps out there as possible and working from there.”

FROM BOWIE TO BLACK AND GOLD

It was there that Bulger became a fixture. He went to as many games as he could as a boy and even struck up a friendship with Eric Crozier who would play in 14 games for the Toronto Blue Jays in 2004.

“He was the first baseman and I was always trying to get foul balls. He was really nice to me and would always talk to me after the game,” Bulger said. “He owns a baseball facility now outside of Maryland so we still keep in touch.

“He just really helped me with my love for the game.”

Crozier vividly remembers meeting Bulger on Bulger’s birthday – and sure enough the youngster had Crozier’s No. 33 jersey on that day.

“I promise every time I saw him he had that jersey on. It was heartwarming,” Crozier said. “I was getting close to the end of my career, I was 9-10 years in at that point, so it was pretty cool just to see that and how much it made his day and I appreciate it. That was a blessing.” 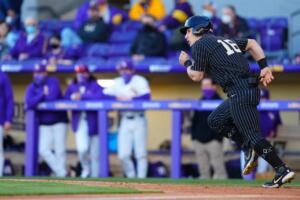 When Bulger wasn’t spending nights at the ballpark befriending Crozier he was honing his own craft on the diamond.

Bulger’s father suggested around the age of 5 or 6 six that baseball may be a fun activity. When his son quickly fell in love there was no turning back.

“As soon as I started getting into baseball, my dad read so many books and did so much research about different baseball things,” Bulger said. “He didn’t try to coach me too much because he knew he wasn’t the smartest baseball person around. He just read and tried to put me in the best situation possible.

“I give him so much credit. He was humble about it and really wanted to learn and wanted me to be the best baseball player possible. He was always there throwing me batting practice any time he could and always making time for me. He’s incredible.”

A standout for DeMatha Catholic High School, Bulger emerged as one of the top prospects in the nation coming out of high school. He was twice named Maryland’s player of the year, played for Team USA’s U18 team and in the 2019 Perfect Game All-American Classic.

There’s a chance had the COVID-19 pandemic not struck that Bulger would have further impressed scouts during what would have been his senior season in 2020. Instead he stuck to his commitment to Vanderbilt – one he made in November of 2017 – and arrived on West End last fall.

“Looking back on it it was kind of a blessing in disguise,” he said. “There is no place I’d rather be right now. With the atmosphere and the energy of the games, there is no better place.”

BULGER IN THE BARN

With not a lot of options last summer during the pandemic, Bulger fortuitously was made privy to a nearby barn on property that family friends had purchased. The building had been turned into a makeshift batting cage and training room for local baseball addicts.

“It wasn’t a 5-star facility or anything super special, but it was really cool,” Bulger said. “It was a little hole-in-the-wall and had a batting cage and a weight rack and a squat rack and some free weights and a sled. It was everything I needed that brought me back to basics without a bunch of new technology.”

Crozier admitted it’s wild to see a Bulger have grown so much into the player he has become. But it’s not surprising given the young man’s work ethic.

“I have had a chance to get in the cage with him in the last two years,” he said. “He was kind of going through some things and probably has a million people trying to influence him. That’s just part of baseball, but in order to get in there and relive some older things as you experience some new things by just talking baseball is pretty awesome.

“I hope he just takes off. He’s been the guy that has had the spotlight on him for a while so hopefully it’s his time.”

As Bulger and the Commodores (29-7, 11-4 SEC) prepare for another vital series this weekend against visiting Mississippi State (28-8, 10-5 SEC), the freshman will continue to look to take advantage of his opportunities as the chase for an SEC championship looms in the near future.

So far so good in that regard for the big-time player from Bowie, Maryland.

“It’s been a wave of emotions from (Davis) fouling the ball off his nose to now,” Bulger said. “I’m just being the best player I can possible be. That’s every single day just trying to get one percent better. I don’t get too involved in the big picture.

“Right now I’m worried about the next practice or game and what can I do to get better? Just taking that mindset every single day.”

We’re knotted at 1️⃣ in the bottom of the sixth. #VandyBoys pic.twitter.com/q1jSsSYeLh