Yes, Carter Young is focusing on those aspects of his game – he always will.

But Young isn’t one to focus the conversation too much on himself.

“My main goal this season is just to be a really good teammate and just be there for them,” he said. “I’ve only played 18 games – and not even an SEC game – so I’m just going to try to be a good teammate and encourage those around me and support them.

“I think that’s what I’m mainly working on right now.”

That’s really the gist of the character of Vanderbilt’s 20-year-old shortstop, who will become a college baseball household name this spring. His coming out party was put on hold in 2020, when COVID-19 ended the NCAA season just 2 1/2 weeks in.

The 2021 season, however, is scheduled to begin in less than a month. Young will be in the middle of the diamond at Hawkins Field looking to continue his still-infant college career while everyone who looks on eyes him.

It’s the latest challenge for Young on an already-impressive journey that has led to the most-anticipated opening day of his life thus far.

The town of Selah, Washington, populates a little more than 7,000 people and has only been around 100 years. It sits in a valley at the confluence of the Yakima and Naches rivers in the central part of the state.

This is the place Young calls home. Where his mother raised the eldest Carter and his brothers Malachi and Braxton and his sister Gabi and where his father is a nurse practitioner. 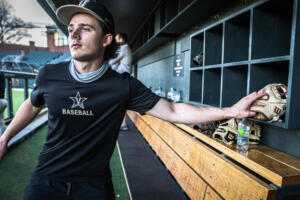 It is not necessarily the locale where one would expect to find two of the nation’s top baseball prospects – Henry Gargus, now playing for Stanford, attended nearby Davis High School.

“If you’re from the area, everybody knows Carter Young,” Courtney Peart said.

Young actually excitedly introduced himself upon first meeting and instantly became interested in Peart’s line of work. Selah baseball had never had an athletic trainer before.

After a while, Young was enrolled in Peart’s exercise health class and his family and her family forged a strong relationship.

“I wish I could put into words how good of a kid he is,” Peart said. “He really is genuine, full-of-heart, very passionate, very dedicated. You’d be hard-pressed to find another kid as dedicated as he is to his sport and who he is as a person.

“He’s very humble, very down-to-Earth. I have to give him props because he comes home and he has all these people after him and he makes a point to make time for those people. He’s very good at making people feel connected to him even though he is this big-time baseball star – which is not normal.”

Before heading to Nashville, Young won two state titles with Selah, was a member of the 18U and 15U United States baseball teams and named an Under Armor All-American and the Washington state player of the year (twice).

Carter Young was indeed a name that echoed off the nearby Cascade Range of mountains. But in Music City? Young knew he’d have to prove he belonged.

As such a highly-gifted baseball player, Young began to feel the surge of recruitment at a young age.

Not only was he a slick-fielder with a strong arm, but youth coach Jay Gainer – who played 23 games for the Colorado Rockies in 1993 – suggested Young try switch-hitting as a 10-year-old. The experiment became permanent and Young’s successes continued to grow. 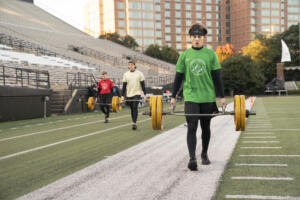 As he made the rounds on the travel ball circuit, playing throughout all parts of the country, he began to become more aware of the powerhouse that is Vanderbilt baseball. After watching highlight videos and researching the school, he thought he may have a chance to actually become a Commodore – if he put in the necessary hard work, of course.

Young also knew leaving the Pacific Northwest for the South would be good for his development as a human.

“It was just to kind of have more responsibility for myself and get away from home because I knew if I went somewhere close I would want to come home more often. Having the ability to come home was not something  I wanted,” Young said. “I wanted to be my own person and be more on my own.

“It has actually played out pretty well. I feel like I’ve kind of been my own person and am learning new things on my own just without having that ability to go back home to lean on.”

Carter Young ranked second on the team in hits (20) and RBI (12), while placing third on the squad in average (.328). 💪#VandyBoys | #AnchorDown pic.twitter.com/iKfmXgfWC4

Young earned a spot in the starting lineup in 2020 and became one of just two Commodores to start all 18 games in the shortened season. He was second on the team in hits (20) and RBI (12) and batted .328.

What those around the program were more excited about, however, was the budding star’s defense.

“For being such a young kid, his actions and the way he moved in the infield were very advanced,” former Vanderbilt second baseman Harrison Ray said. “The way Carter carried himself as well was just like – he never was arrogant or cocky or came off that way. He had a presence out there, knew he should be out there and wanted to be out there. Being around that, I love guys who carry themselves like that, very confident in themselves.

Freshman Carter Young has an RBI in six of his last nine games.#VandyBoys | #AnchorDown pic.twitter.com/kBAswoguyK

“He definitely was quiet, went about his business and showed up every day. He’d make a play in the infield and you’d be like, ‘Whoa. That’s different. That’s impressive.’ For the most part it was very consistent and to see that out of a young kid was definitely eye-opening to me.”

On Feb. 19, Young is hoping to be in the lineup for his 19th career start – a start perhaps more eagerly-awaited than the first.

“Coach Corbin had a lot of influence on my decision to attend Vanderbilt. I saw from the first time I met him that he was like a father figure to his players. Moving across the country, I knew that was a trait I would need from my coach.” – Carter Young #VandyBoys | #AnchorDown pic.twitter.com/AizTDujb7a

When the COVID-19 pandemic shut down college athletics in March, and the 2020 Vandy season, Young returned to scenic Selah.

He spent much of his time outdoors, where he enjoys fishing to clear his mind and escape reality. He also took up a job with a flooring company where he laid carpet and linoleum.

“I learned a lot from that, too, and just having that experience,” Young laughed. “I have a really good opportunity playing for Vanderbilt and being able to play baseball – I’m getting to do what I love to do and not something that I don’t like to do.” 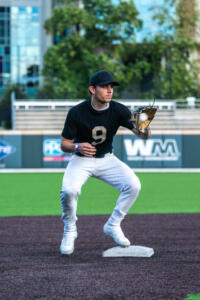 Young also played six weekends with the Mercedes-Benz Baseball Club, but since the team wasn’t permitted to take the field in the state of Washington, competition mostly included doubleheaders on Saturdays in Oregon and Idaho.

The 6-foot, 180-pound shortstop who played every infield spot (excluding first) – and even caught some during his youth days – found himself in a leadership role playing with younger teammates going up against better and older competition. Young returned to Nashville this fall intent on taking those lessons and applying them on West End.

Vision boards, a method he found successful in high school, helps with those endeavors.

“I set out goals for myself and just try to set the bar really high so that way even if you don’t succeed you’re still doing something to improve yourself,” Young said. “I just feel like that’s something my parents always instilled in me and I kind of carried it into my pre-adult life.”

Young, 20, is now majoring in American Studies. Over the next five months Southeastern Conference baseball fans will be studying the movements of a student-athlete many consider the best defensive shortstop in the league.

A shortstop from the small town of Selah with a big, big future.

“For me it’s arm strength. It’s a quick-twitch step and then it’s like, ‘How did he get to that ball so quick?’ It’s nothing that jumps off the table. It’s just the next thing you know he’s at this ball up the middle, he’s in the hole at that ball and you’re like, ‘Holy cow,’ ” Ray said. “He’s got so much range. And when the ball hits his glove it’s not coming out.

“Over the next year or two years it’s going to be to be very fun to watch the growth that (Vanderbilt head coach Tim Corbin) Corbs is going to get out of him while making sure that he’s doing all the little things. He’s just going to continue to grow at that position. It’s going to be scary to see where he goes.”