NASHVILLE, Tenn. — Strong-willed and determined. That’s what Owusu translates to in the Akan language.

Michael Owusu is the youngest personification of the Owusu’s, a California family that has seen five children attend elite academic institutions in America long after their father Francis Owusu Sr. emigrated from Ghana and his mother Luaiva Owusu from Samoa.

Michael Owusu, now a fifth-year senior at Vanderbilt, has finally started to come into his own both on the field and off the field as a Commodore. He credits his emergence as a playmaker on the Vandy defense to an important personality trait.

“Patience. I think that patience is key and very necessary for growth,” he said this week. “I’ve gotten significant playing time this year because of what I was able to learn from my teammates who were ahead of me the previous years. I knew my time was coming. I’m starting to see the flower bloom a little bit which is good. My patience is all paying off essentially.

“One thing I’ve learned is to just be patient with myself, be patient with others, give myself the necessary mental time to assess specific situations, whether it be on the field or in the classroom or building relationships with others. Just giving myself the time to do all those things. I’ve just gotten better and better by the years.” 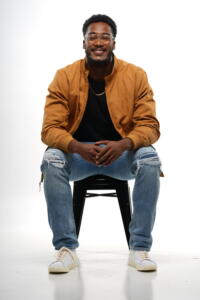 From his outside linebacker position in coordinator Jesse Minter’s defense, Owusu has made eight tackles through the first two games of the season. He only made seven in eight games in 2020.

“Him being able to buy in and do the things that he needs to do to put himself in position to be on the field – he’s done those things,” Vandy linebackers coach John Egorugwu said. “He’s still a work in progress like all of our guys to continue to get better, but he’s doing some good things out there.

“He’s aggressive, man. He’s an aggressive player that can make plays, not only as a linebacker, but on third down as a pass-rusher. He brings that versatility that is going to be very, very beneficial as we go through the season.”

Owusu graduated from Vanderbilt with a degree in medicine, health and society. He had a year left of eligibility and it certainly would have been understood if he had chosen to play elsewhere in 2021 after Vanderbilt went through a coaching change last fall.

But he told himself if there was at least just one teammate from 2020 returning for the 2021 season then so would he.

“I just knew my job wasn’t finished yet here. I knew that I had more to give,” Owusu said. “(In 2020) COVID-19 just came and it hit everybody in the mouth to be honest. The whole world went on lock-down and things changed forever. But for me it was important that I stayed and stuck through it. I’m really trying to make things count.”

That brings the story to this weekend.

Since Owusu did return to Vanderbilt, and since he’s become a key cog for the Commodore defense, he’ll get to take the field Saturday against Stanford. That’s the program two of his brothers played for not too many years ago.

The text messages between the three Owusu’s have been a little saltier than normal this week.

Gon need all the support we can get this week‼️ #chopthetree

Michael Owusu drew inspiration from his Stanford brethren but also from his older sister Crystal Owusu who played basketball at Columbia. Older brother Brian Owusu was twice an All-Ivy League selection as a defensive back at Harvard.

Then there’s the elder Francis Owusu, a track star at both Utah State and North Texas who ran the 400-meter for the 1976 Ghanaian Olympic team. He, said Michael, taught all his children how to train for speed and power when they ran. 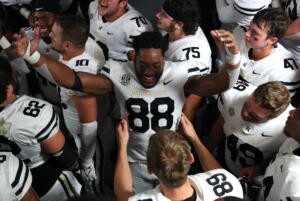 Owusu ran a little track himself as a youth, but decided it wasn’t for him. He also tried some basketball but kept gravitating back toward the gridiron.

He developed into a three-star recruit at Oaks Christian School and decided not to follow his brothers to northern California. Owusu saw instead the potential in Vanderbilt and yearned to compete in the Southeastern Conference.

Four years later he has a Vanderbilt degree and is now pursuing a master’s in education hoping to one day teach or work among lower-income communities to help provide equity within those communities.

Before those days come, however, there’s an important day a few hours around the corner. At 7 p.m. Saturday, Owusu will be out to showcase how his patience has paid off and how he heeded his Stanford brothers’ advice.

“What they taught me was just play every rep like an NFL scout is watching – which means they’re watching every single detail, technique, effort. If you’re calling out plays how are you interacting with your teammates? They’ve instilled in me that every single detail is important,” Owusu said of Chris and Francis. “I can’t skip a beat or (the offense is) going to definitely take advantage of that, especially with a team like Stanford. They’re looking for every single inch you can give them. (My brothers) told me just to hone in on the details and you’ll be alright.

“Stanford’s a really good team coming off a win against USC. It’s going to be a tough one but I’m excited.”