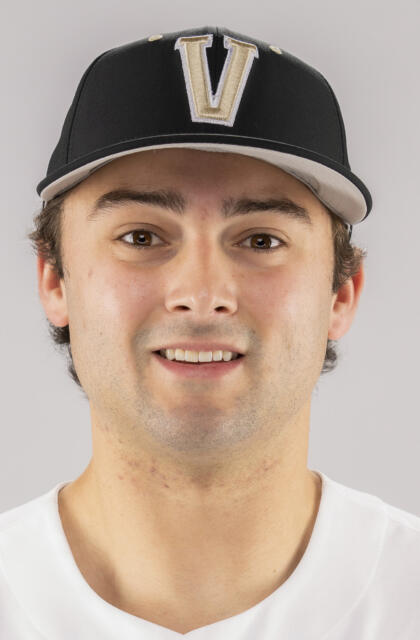 Head coach Tim Corbin on Kolwyck: “Tate is one of the most positive kids we have had in our program. His attitude toward academics, athletics and life are consistent and constructive. He is a very influential teammate and his mission as an individual is to serve the team. Tate is best described as a, “baseball player.” He has done many things on the field defensively and started to emerge into a very sound defensive second baseman last season. He has also grown into a steady offensive player who can drive the baseball to all fields. We missed Tate in our postseason run (in 2021) because of an injury. His on and off-field presence will continue to help this program. He is a winning young man in every way.”

As a Senior (2022)
• Homered, doubled and drove in three at Arkansas (May 14)
• Went 3-for-4 with a double and RBI vs. Texas A&M (April 29)
• Went 3-for-4 with an RBI at Kentucky (April 24)
• Homered in Games 2 and 3 against Missouri while on an 11-game hit streak.
• Drove in tying run vs. Michigan (March 15) with a two-out, two-run double in the ninth and scored winning run on a wild pitch
• Doubled in three consecutive games vs. Wagner, Michigan and Missouri.
• Three-RBI, three-hit performance including a homer and double in Game 1 vs. Wagner (March 11)
• Three RBI at Hawaii (March 4)
• Started season with pair of hits, including a home run, against Oklahoma State (Feb. 18)

As a Junior (2021)
• Doubled twice and drove in three runs in his season debut in the opening twinbill against Wright State (Feb. 22)
• Recorded a triple and drove in a run in the win over Western Kentucky (Feb. 24)
• Clubbed a grand-slam in the fourth frame of the second tilt with Oklahoma State (March 13)
• Matched his season-high four runs in the second game against South Carolina (March 20) in addition to his 2-for-4 day
• Swiped a base in the 11-7 road win over Florida (April 30)
• Registered five hits against Ole Miss (May 14-16) in 13 opportunities

As a Sophomore (2020)
• Season canceled due to coronavirus outbreak
• SEC’s 34th-best 2021 MLB Draft prospect by D1Baseball
• 11 appearances and six starts
• First career home run on first pitch vs. Southern California (March 7)
• Two hits and two RBIs vs. Central Arkansas (March 3)
• One walk and one RBI on vs. Connecticut (Feb. 15)
• One hit on opening day vs. Michigan (Feb. 14)