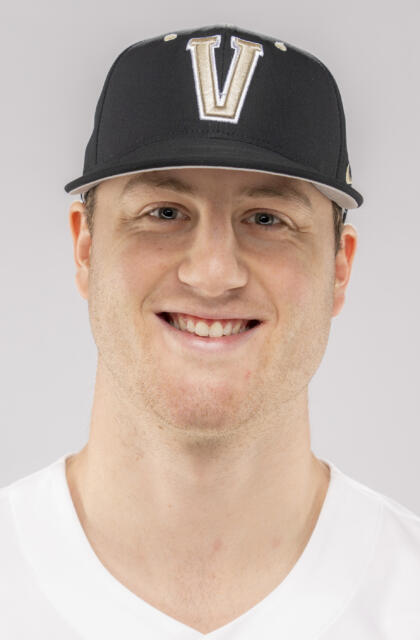 Head coach Tim Corbin on Schultz: “Thomas is one of the best athletes on our team. He has continued to grow in the weight room and is surging with his development on the mound as well. He has served different roles on our staff along the way and has had success. He is moving better down the mound and his pitch development continues to grow. Thomas is mature and respected throughout our team. Consistent student-athlete … always performs well academically. Enjoyable young man to be around.”

As a Junior (2022)
• Fourth in SEC in saves
• Made season debut with a save vs. Oklahoma State (Feb. 18)
• Earned first win of the campaign with a scoreless inning vs. Michigan (March 15)
• Earned a save with 1.2 scoreless innings vs. Missouri (March 20)
• Struck out five over a combined 2.2 innings against Florida (April 15-16)
• Pitched 16.0 scoreless innings over 10 appearances from April 8 to May 13
• Finished the regular season with team-high seven saves

As a Sophomore (2021)
• Made 14 appearance as a sophomore
• Owned a 4-2 record with 40 strikeouts, while totaling 44 innings of work
• Tossed a scoreless frame in relief in the second game of the season-opening doubleheader with Wright State (Feb. 22) – fanned two on 15 pitches
• Struck out a season-high eight in five no-hit innings against Illinois-Chicago (March 5) in a 15-0 win
• Fanned seven, walked one, allowed four hits and surrendered two runs through 6.0 innings in a midweek win over Eastern Kentucky (April 13)
• Recorded one strikeout in one inning of relief in the 10-0 win over Presbyterian in the NCAA Regional

As a Freshman (2020)
• Season canceled due to coronavirus outbreak
• Appeared in four games and made one start
• Posted a 0.66 ERA and .184 opponent average
• Allowed just one run in 13.2 innings
• Registered a 17-3 strikeout-to-walk ratio
• Earned the save vs. South Alabama (Feb. 18)
• Held Hawaii to one run in five frames (Feb. 29)
• Won Omaha Challenge for pitchers

The Schultz File
• Prepped at Our Lady of Lourdes Regional (Mount Carmel, Pa.)
• First-team all-league four consecutive seasons (2016-19)
• Went 7-2 with a 0.29 ERA and .407 batting average as a senior
• Finished 6-1 with a 0.83 ERA and .382 batting average as a junior
• Helped squad to first district title in 15 seasons (2018-19)
• Four-year letter winner in basketball
• First-team all-state in basketball as a junior and senior
• Set school and area scoring record in basketball with 2,355 points
• Graduated fifth in class
• Four-year honor roll (2016-19)
• Member of National Honor Society
• Full name is Thomas Ronald Schultz
• Son of T.J. and Michelle
• Sister, Rachel Schultz, played basketball at Elizabethtown College (2014-16)
• Majoring in human and organizational development and medicine, health and safety