If you play tennis against Vanderbilt this spring, you will likely see a Ross on the other side of the net. Men’s or women’s tennis, it doesn’t much matter. And whether it’s Anna, a junior, or Michael, a freshman, you’re also likely to be on the wrong end of the score.

As the Commodores take on Tennessee this weekend, the women in Knoxville on Friday and the men at home on Sunday, the Ross siblings are already instrumental in successful seasons. In addition to a winning record as her team’s No. 1 singles player, Anna is 10-6 with an array of partners in doubles. Meanwhile, Michael and partner Siim Troost are 17-13 in doubles for the men’s team, including three victories against nationally ranked opponents.

The siblings are adept at working with others on the court, likely because tennis was always a collective experience for them. They were sometimes partners, other times opponents. Sometimes teammates, other times rivals. But always they were siblings.

Even if cooperation and camaraderie weren’t always as natural then as they are these days.

“Until I was in maybe ninth grade, Anna was always better than me,” Michael admitted. “Every time we played, I would throw a fit because I would lose to my sister. No one can stand that.”

A younger brother’s occasional fits of temper notwithstanding, Anna and Michael brought out the best in each other on the court. They supported and challenged each other in pursuit of the excellence that earned them opportunities to play Division I tennis. They never planned to continue that journey at the same school. And while it is Vanderbilt’s great fortune that they did, it is also their own. Tennis has more lessons to teach them, together.

“We’ve gotten a lot closer recently,” Michael said. “Now we’re at the same college and we’re young adults, we’re on our own. It’s easier to lean on each other and get close to each other in this atmosphere.” 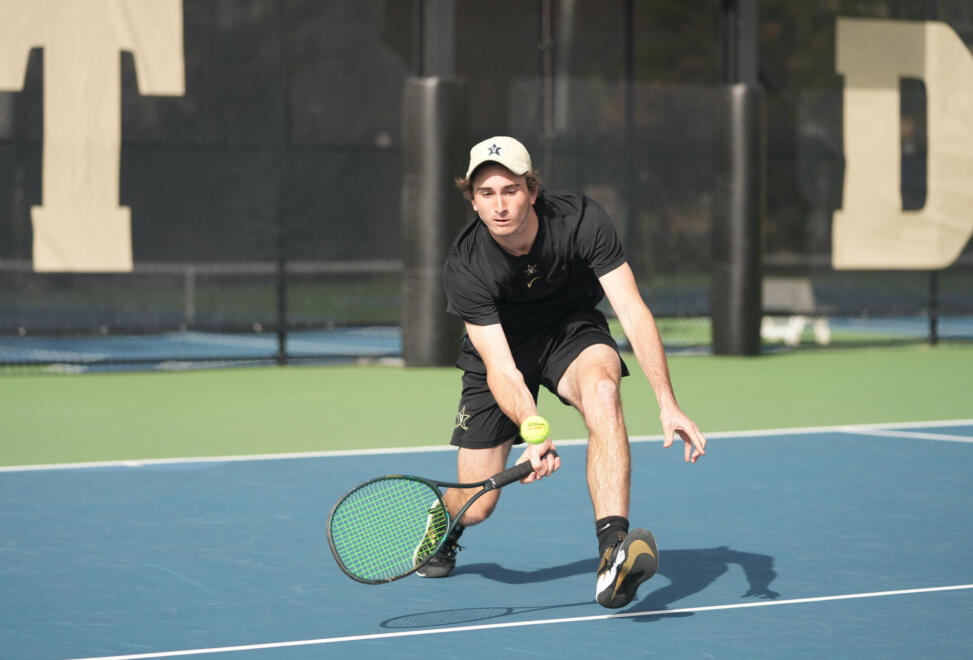 While it isn’t the norm to find a sister and brother competing for the same school in the same sport at the same time, it is not at all surprising that these siblings ended up on a tennis court somewhere. If tennis isn’t the family business, it is at least a passion passed from one generation to the next. Their grandfather played at Duke. Their dad, Ed Ross, and uncle, John Ross, played at SMU and went on to play professional tennis—John reaching the second round in singles and doubles in multiple Grand Slam championships. And Anna and Michael’s elder brother, Eddie, is a senior on the SMU men’s tennis team.

Ed and John were retired and successfully immersed in the world of finance by the time Anna and Michael were born, but tennis memorabilia adorned entire walls of the family home, and tennis talk filled entire conversations. Both siblings struggle to recall a time when they weren’t around tennis—a time before Saturday mornings spent hitting balls with their dad.

At some point, however, each had to discover his or her own motivation, a reason beyond routine to put in the hard work necessary to succeed. For Michael, it was easy. Each time he took a week off or ventured into some other sport, he missed the way that tennis fed his desire for competition. The game always felt like part of him, no easier to shed than a limb.

Anna’s route was more circuitous. She played volleyball when she was young and enjoyed the teamwork and the sense of responsibility to those around you that comes in team sports. The problem was that tennis and volleyball occupied the same season in high school. To excel at either, she needed to choose. Her grandmother, among others, encouraged her to see where she could go in tennis. She told Anna she could be her own person.

“I had different aspects of my game that were my strengths and differentiated me, not only from my brothers, but from a lot of the playing field,” Anna said. “I think relishing that and having my coaches stress the unique aspect of my game made me like, ‘I’m not just another Ross tennis player. I’m Anna Ross. I have so many attributes that are my own.’”

Their embrace of tennis ultimately proved fortuitous for Vanderbilt, twice over. Anna didn’t know much about the university when a cousin invited her to go to a Kenny Chesney concert in Nashville. In a refrain common among Commodores across the years, the city won her over.

“I remember going to Broadway and listening to all the music—I remember getting my first pair of cowgirl boots,” Anna said. “I fell in love with Nashville.”

That was before she learned about Vanderbilt’s women’s tennis program, with a history of success that culminated in a national championship. Alerted to the opportunity to compete for championships at one of the nation’s best academic institutions just steps from Broadway, she set her heart on Vanderbilt. She had to wait until her senior year of high school, but the offer came.

“When I got that, I just started crying,” Anna recalled. “It was a monumental moment for me.”

But if you had told Michael, at that moment, that he would soon join his sister in Nashville?

“I probably would have laughed in your face,” he acknowledged.

If Michael was going to play alongside a sibling, following Eddie and the extensive family connections to SMU was more likely. Still likelier was a different SEC port of call. He grew up a Florida fan. His dad, a Gainesville native, coached with current Vanderbilt head coach Ian Duvenhage for a short time when the latter was at Florida more than two decades ago.

Even with Duvenhage’s success, Vanderbilt wouldn’t have been on Michael’s radar if not for Anna. Once introduced, though, he liked the campus and the city. He liked the coaches and student-athletes he met from the men’s team. When offered a scholarship, he didn’t hesitate.

Schedules being what they are, with one often practicing when the other is in class or one on a road trip while the other is playing at home, they don’t get many chances to hit together these days. And when they get together away from the courts, to grab something to eat or hang out, tennis often isn’t the main topic of conversation. Still, as Anna noted, when she wins or, less frequently, comes up short in a big match, her brother is the first person she FaceTimes.

They always understood each other. Growing up, they understood the uncompromising schedule that came with pursuing tennis at the highest competitive levels: training in the morning, classes in an online high school, then more practice. They rode in the same vans to youth tournaments. Each knew the social sacrifices the other made to pursue the sport.

At Vanderbilt, they realize more and more how much it means to know those things.

“We’re transitioning into adulthood, and you don’t have your parents around,” said Anna, who is studying human and organizational development. “I think having him here, it’s like he filled a hole I didn’t know was missing until he came here and it’s normal. That was something I overlooked and I’m really grateful for today.”

Perhaps that explains a little of why, in doubles, each is so successful when paired with others.

As for the prospect of playing mixed doubles, the format isn’t part of college championships. But they have played together in tournaments outside of NCAA competition. And when Vanderbilt’s men’s and women’s teams held a joint practice last fall, what might be the school’s best doubles team took the court together.

“We did, yeah,” Anna allowed with a grin.