Anderson arrived on campus as a walk-on. Four years later, he departed as the nation’s top punter-kicker in the nation and a consensus All-American.

Anderson’s senior season was remarkable. As a punter, he topped the nation with a 48.2-yard average. It remains as the highest yearly punting average ever in the SEC by more than a yard. 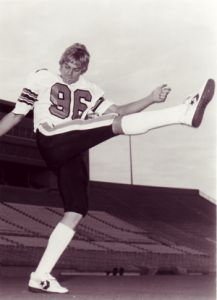 Following the 1984 season, he was named a consensus First Team All-American and All-SEC selection.

Anderson holds several team kicking marks. Besides the single-season average record, his 82-yard punt against Georgia in 1984 remains the longest in team history.

Anderson’s career average of 45.6 yards also ranks first, as does his single-season scoring total of 73 points in 1982. He also ranks third on the team’s all-time scoring list with 192 points.