NASHVILLE, Tenn. — When the plane landed in Nashville at 9:18 a.m. Tuesday, Shea Ralph knew with full confidence she was starting the right journey.

“It feels like it’s only the beginning of something incredible.”

Ralph, who has been part of seven national championships as either a student-athlete or a coach, was formally announced Tuesday as the new head of Vanderbilt women’s basketball. The 43-year-old starred at Connecticut before becoming an assistant coach, first at Pittsburgh, and then at her alma mater. 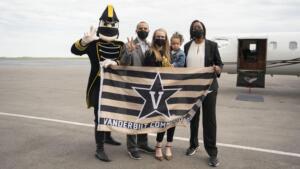 For the past 13 seasons Ralph had been instrumental in helping the UConn Huskies maintain their status as one of the top program’s in the country. But when Vanderbilt vice chancellor for athletics and university affairs and athletic director Candice Lee called last week, Ralph was presented an opportunity she regarded as once-in-a-lifetime.

“Connecticut is a very hard place to leave,” Ralph said. “I played there. I was working for my mentor who might be one of the best coaches ever in the game of basketball. There’s so many wonderful things about UConn that make it hard to leave – I was still challenged there every day.

“But when I got that call, I was already here. This place is one of, if not the only place, I would leave Connecticut for.” 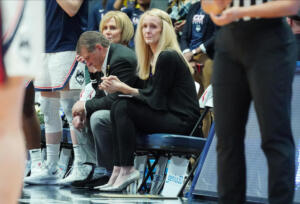 Ralph, married to former Vanderbilt women’s basketball assistant Tom Garrick, was inside Memorial Gymnasium as recently as Nov. 13, 2019, when UConn beat Vanderbilt 64-51. Ralph and the Huskies would go on to finish that season 29-3 before the onset of the COVID-19 pandemic and they finished the 2020-21 campaign 28-2 after a loss at the Final Four.

Vanderbilt has not been to the NCAA Tournament since 2014.

“The way that I’ve seen success elevated and sustained is through people. This is a very challenging environment, it’s a high-pressure environment. There’s a lot of expectation,” Ralph said. “I have to start with bringing the right people in and making sure that when I bring those people in, whether it’s player or staff, that we are surrounding each other with the knowledge, the trust, the honesty, the integrity and the passion – all the things you need to be great.

“I’ll make sure the staff I surround my players with will be able to give them the tools to do what they want to do. That’s my job. Your job is to give me 150 percent of yourself and together I know that combination can make us do great things.”

As a national high school player of the year in the state of North Carolina, Ralph averaged nearly 40 points per game as a junior at Terry Sanford High School. The prolific guard scored 3,002 career points and once scored 61 points in a single game.

And, coincidentally enough, Ralph and Lee rode the same elevator at a high school all-star event in Colorado in 1996.

Ralph’s mother, Marsha Mann, was North Carolina’s first-ever All-American during the 1974-75 season. Her grandmother, Edith Mann, even played for Dunn High School in the early 1940s. Both instilled in her at an early age the importance of education above all else.

“Athletic and academic excellence don’t have to be mutually exclusive. You can be great at both,” Ralph said. “All the players that we brought in (at UConn) were high academic achievers. If you want to be great in everything you do, and you are and you put forth the effort, it’s hard to fail.

“I know what those kids look like. We work with them and I’ve recruited them. That’s the kind of player I’m used to recruiting and that’s the type of player I will continue to recruit here.”

Vanderbilt was 4-4 last season in an abbreviated season due to COVID-19. But over the past seven seasons the Commodores have gone 28-82 against league opponents.

Ralph is charged with changing that by virtue of her passion for family, growth, integrity and leadership.

“I know it’s not always going to be unicorns and rainbows, but I feel like I’ll always have the support around me that even in those hard days we’ll make it fun and understand it’s part of the journey,” Ralph said. “We have everything we need here to be great. And I know what that looks like. And we have it all here at Vanderbilt.”