NASHVILLE, Tenn. — One word comes to mind for Jovan Haye when asked what it means to be part of Clark Lea’s coaching staff.

“Just humbled. I was humbled by the opportunity,” Haye said. “I’ve always wanted this to be home. I’ve always had a dream for this place. I wouldn’t want to go anywhere else.”

Haye, a former Vandy star on the defensive line during his playing days, returned to West End to assist former head coach Derek Mason in 2018. Haye’s 2021 season will now be his fourth pacing the sidelines for his alma mater, but first with Lea – his former teammate during the early part of this century.

The current defensive ends coach played for the Commodores from 2002-04.

“I always say this – Jovan is my captain,” Lea said. “Jovan Haye was one of the most-impactful leaders as a young person that I was ever around. He was relatable. He was tough. There was player-to-player accountability.

“He loves Vanderbilt football. He lives it and loves it every day.”

Haye played in the NFL with Carolina, Cleveland, Tampa Bay, Tennessee and Detroit, respectively. The native Jamaican was twice named All-SEC before becoming a sixth round NFL Draft pick. 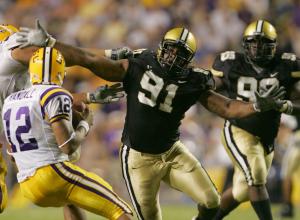 One of four former Commodores on Lea’s staff, Haye said turning Vanderbilt into a consistent winner isn’t just important to the alums in the building, but to all those who arrived in Nashville this season.

“I think everybody in this building takes it personal. Everybody,” Haye said. “I think a lot of guys left some real good spots to come here. We all share coach Lea’s vision. It’s real personal for guys. If you leave the NFL or a team that’s been to a bowl to come here, it has to be something special within the shared vision.”

Holding a Vanderbilt degree in human and organizational development, Haye said he’s calculated with how often he speaks to the current members of the team about how he navigated his time as a Commodore on and off the field. But he admitted it does helped he elevated his game enough to have an opportunity at the next level, which gives his teachings added weight. 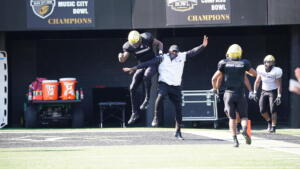 And Haye is looking for young men who have the same aspirations that he once had, young men who are focused first and foremost on their academics while striving to become NFL players. His teaching methods, he said, start with solidifying the mental approach to the game before perfecting the physical approach.

Lea is confident Haye will help bring in future student-athletes with the mindset to become great.

“I’ve got a guy who is building those relationships and understands absolutely what we want to accomplish here together – it’s such a powerful thing to have,” Lea said. “Jovan is also a dynamic recruiter. He’s a dynamic recruiter because he has the personality and energy. He believes in the product he’s selling. What a great person to have with me. It’s great to have my captain on staff. That’s a big thing for me.”

A published author and father of four daughters, Haye helped develop NFL Draft prospect Dayo Odeyingbo in 2020 as the team’s defensive line coach. His goal for the present and near future will be to develop more such players – but also to develop Vandy into a consistent winner.

Doing that would be more fulfilling for one of the program’s all-time greats than anything else.

“I think winning here would be way more special than anywhere else,” Haye said. “That’s my belief.”