After playing seven seasons in the NFL, writing a book and developing an interest in business and investments, some people were surprised when I decided to return to Vanderbilt as an unpaid volunteer coach on Derek Mason’s football staff last season.

But the people who know me best weren’t surprised. They know I’ve got “Vanderbilt” tattooed all over my body, and they know how many ways this university has blessed me. More ways than the young kid growing up in Jamaica ever would have imagined. My story is proof that anyone can make it here, no matter their background, no matter their challenges. And it’s also proof of the value of a Vanderbilt education, the opportunities it creates. Let me tell you what I mean.

I was born in Jamaica, and the conditions we lived in were pretty tough. When I tell our players we swept dirt, I mean we literally swept dirt floors. And we made brooms by gathering some leaves and some wire and wrapping the leaves around a stick. My toy car was a milk carton with lemons attached for wheels. I’d pull it around with a string.

We used an outhouse and took cold showers. Well, not completely cold. We would boil water and you’d get a one-time splash. There was no air conditioning; whatever God gave us that day for wind, that was our AC.

I didn’t know this was different than how kids grew up in the United States.

I also didn’t know that I was dyslexic.

I just thought I was a dumb kid, and my teachers did, too. They’d call me a dunce, and they would spank me when I got answers wrong.

Not surprisingly, after a while I began to skip school all the time. I’d hide in the sugarcane fields. When I did go to school, I was deathly afraid. There was a girl in my class that I liked, and I got tired of her seeing me struggle with reading. So, one day I decided to throw my school book in a fire that was burning just outside our classroom. I figured if I didn’t have a book, my teacher couldn’t make me read. Of course, my plan backfired. She just gave me someone else’s book to read. 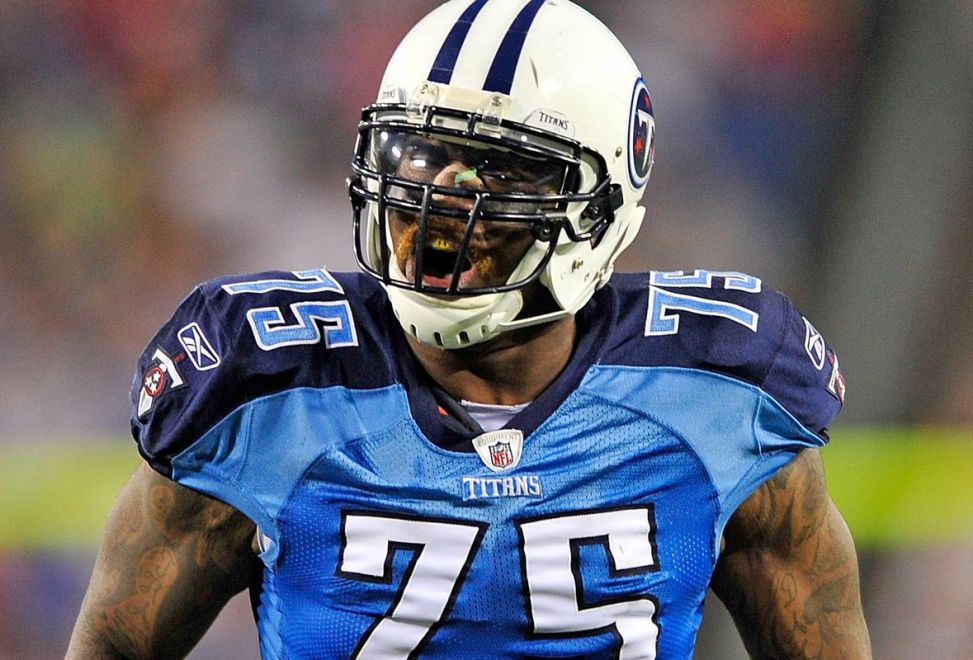 When I was six years old, my parents moved us to New Jersey. They said they wanted to provide a better life for me and my younger brother. When they said that, it was the first time I considered that there was even a possibility of a better life.

Once we got to the States, there were certain things that were shocking. I’d never seen a white person before. I didn’t even know that white people existed. The tall buildings were a shock, and so were restaurants. In Jamaica, we’d kill our own food. I had killed goats, chopped up cows.

One thing that didn’t change was my struggle with reading, and my stuttering. I started skipping school again, hanging out at the 7-Eleven or going back home and sleeping after my parents left for work. We bought Hooked on Phonics, but it didn’t work. I was struggling so much in school, and nobody knew why. My parents thought I was being defiant, and they’d discipline me. I went to a speech therapist, but nothing there worked either. I spent all my time staring out the window and eating her jellybeans (all but the black licorice ones).

I didn’t really know what suicide was at that young age, but I did know that I didn’t want to live like this anymore. Imagine you can’t read, can’t do anything in school, you’re in a new country, and you’re stuttering, too. It was a very, very difficult existence.

Things finally began to change when we moved to Florida. My uncle Barry was big on sports, and he introduced me to soccer and basketball. For the first time in my life, I found something I was good at. Sports became a salvation.

I was still struggling in middle school, but I’d look forward to the weekends when we’d visit Uncle Barry because we’d get to play. But soon even the weekends weren’t so great – Barry started making us do school work before we could play. He’d grade the work. If you didn’t pass, you couldn’t play. I started making my cousin do the work for me. 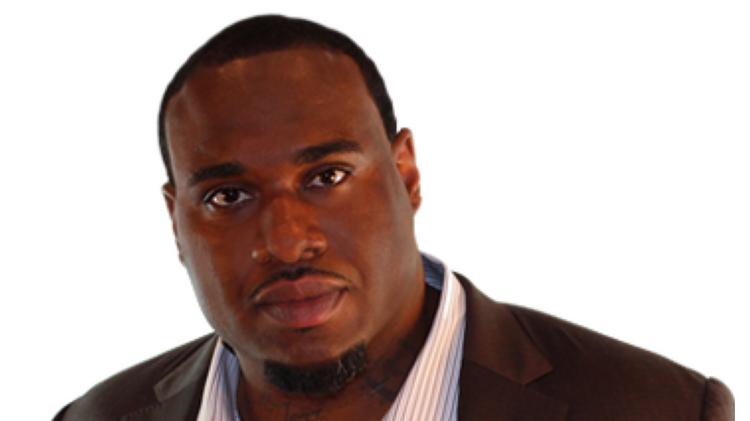 Somehow, I was able to get into Dillard High School, a great magnet school. I bombed my first semester. I’ll never forget the day my English teacher, Miss Patton, asked to see me after class. She said “I know you’re dyslexic, Jovan, I know you have learning issues. But when you get an assignment you enjoy, you’re the best student ever. But the second you get something that doesn’t spark your interest, you’re one of the worst students I’ve ever had. You’ve got to stop using dyslexia as a crutch. You’ve shown too many flashes of greatness. I know you can do this.” I started crying.

That night, I did something I’d never done before. I’d spent all this time talking to my parents about my struggles, meeting with counselors and therapists. But I’d never had a conversation with God. That night I fell to my knees and just asked, “Help me figure this out. I swear I’m going to do right.” And it was at that moment that the proverbial light switch turned on. It was the conversation He was waiting for me to have.

After that, Miss Knight, my science teacher, and Miss Patton really started to work with me to develop my own strategies for success. I sat in the front of the classroom every day, so I couldn’t hide in the back and go to sleep. I developed techniques to help me read – no more jumping lines or jumping words. I practiced pronouncing words correctly with my parents at night, looking ahead to the next day’s reading. I counted on my fingers and didn’t worry how that looked to other kids. The bottom line is that I figured out what worked for me. I stopped trying to be like everybody else, because I’m not like everybody else.

And with this new approach, I started to do really well in school. I never made less than an A. I became an Honor Roll student, took some honors classes. I graduated from high school with a 4.5 gpa on a 4.0 scale.

I didn’t start playing football until my junior year of high school, and I wasn’t very good at it when I got started. I was raw. But I had size and speed and got to be pretty good pretty quickly. I started going to camps, and scouts and coaches came to see me play. 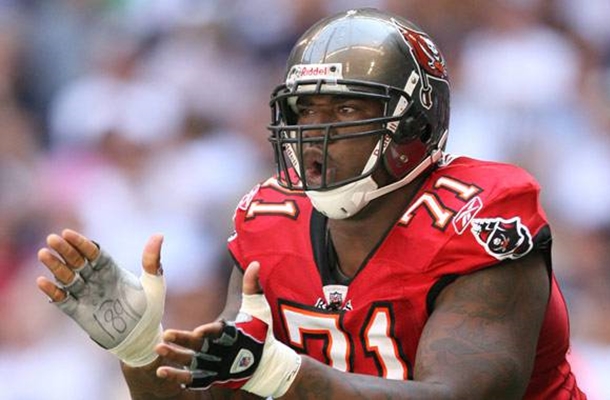 One weekend, I had a recruiting visit scheduled to Ohio State. But on Thursday before I left, I saw my high school teammate Nigel Seaman crying. He had his heart set on Georgia Tech, but they canceled his official visit on him. So, he said he was going to Vanderbilt. I told him I had been offered by Vanderbilt, too. I called Ohio State and canceled my trip. I came to Vanderbilt to support my friend. And I ended up loving this place.

The problem was I’d never had a lot of freedom before. Suddenly I was here on campus in the fall of 2001 and nobody was telling me where to go, what to do. I didn’t handle that well at first, and I found myself with a 1.8 gpa after my first semester. Our academic counselor, Elizabeth Wright, called me into her office and explained that if I didn’t improve my work habits and improve my grades, I wasn’t going to last long at Vanderbilt.

This was the last thing I wanted. I’d seen it happen in Florida all the time — really talented high school football players would go off to college, act a fool, and kicked out of their college for academic reasons. I said I’d never be one of those guys. And now I was on the verge.

But Miss Elizabeth was a lifeline. She helped me dig out. I began taking advantage of all the resources that were available to me as a student-athlete at Vanderbilt. I improved my study habits, became a better writer, became smarter about the classes I selected. I even changed the way I dressed, ditching the jogging pants and T-shirts for a more academic look. I told myself I was more than an athlete, and I showed that side of myself to the world. I knew what it felt like to come up from the bottom. I’d done it before. Why not do it again?

And I did it. I studied, I got my work in on time, and I lifted my grade point average from 1.8 to 2.4. I wish I had applied myself early, but I was able to figure it out and take advantage of all the resources here to help me succeed. I was a team captain, All-SEC defensive lineman, and more than capable student. It felt good. There were so many classes that prepared me for life, so many connections with professors, staff and fellow students that became important when my playing days were over.

I played seven years in the NFL, and all along I knew that one day, I’d no longer be a football player. It happens to all of us, whether we want to believe it or not. For me, reality hit one day in 2010, when I was playing for the Tennessee Titans. I walked in the locker room and there was no jersey or helmet in my locker. I realized I wouldn’t be dressing for that Sunday’s game.

That’s when it hit me that I better be prepared for life after football. I reminded myself that Vanderbilt had prepared me, my degree had prepared me, my relationships had prepared me. This was the reason I had chosen Vanderbilt in the first place. I was able to leave the NFL on my own terms and feel good about it. Hats off to any young man who gets a college degree. But there are levels. There’s a difference between a Cessna and a Gulfstream G6. One’s going to fly faster and look way better getting there. Vandy’s a G6 education. I had that confidence when I entered the business world.

I started my own businesses, and there were successes and failures, as there are for any entrepreneur. I learned important lessons. I began to invest in other businesses. I decided to write a book, hoping that sharing my story – the whole journey from a poor kid with anxiety and suicidal thoughts, overcoming dyslexia, graduating from an elite academic institution, playing pro football, and making it in the business world — would be an inspiration to other young men.

And then I decided to bring my life full circle, to return to a place I loved, to a place that had done so much for me, and a place that would give me a platform to give back to others. I came back to Vanderbilt to begin a career in coaching. I wanted to start at the bottom, to prove myself all over again. I joined Derek Mason’s staff as an unpaid volunteer coach. Now I’m the full-time defensive line coach. My greatest satisfaction comes in seeing the guys develop, get better every day. It’s all about them.

Ultimately, my story is about being able to dream big, and finding a way to live out that dream. And after you live out that dream, dream big again. And help other people live out their dreams, too. I tell our student-athletes to do what’s right, walk with pride. You belong here at Vanderbilt. I’ve done it. You’re going to do it. We are Vanderbilt Men.