Getting it Done on Day 2

SMYRNA, Tenn. — Vanderbilt powered through an unbeaten day and earned the No. 3 seed in the 33-team Columbia 300 Music City Classic.

The Commodores have a shot of winning the championship Sunday, but first must get by 4-seed Stephen F. Austin and then negotiate the winner top-seeded McKendree or No. 2 seed Arkansas State in the best-of-seven Baker bracket.

Vanderbilt was razor-sharp from the start, beating No. 1-rated McKendree and No. 7-ranked Louisiana Tech in the position rounds that began Saturday’s play. After a solid win over No. 24 Monmouth, Vandy came back to topple third-ranked Sam Houston State, breaking open a tight match with a huge 10th frame.

The Dores averaged 1,085 pins in those four matches.

“Today was better, we competed hard,” Vandy head coach John Williamson said. “The first four rounds were really good. We left some things out there in the fifth round but it was a long day. We didn’t finish with the same authority or enthusiasm we had the first four rounds.

The girls did the things we asked of them. They controlled our controllables. We didn’t have a lot of splits, we had a few missed makeables that kept us from some higher pin counts — that’s probably a bit nit-picky today.”

“Overall it was pretty good day,” Mabel said. “My launch angles were pretty consistent. Making a good first shot is how (associate head coach) Josie (Barnes) and I figure out what people behind me need to do.”

Ironically, it was a terrible first two frames that turned out to be a silver lining to Cummins’ day. After going open-open, she changed balls and said afterwards that, “Josie told me that the early ball change was probably the best thing that could have happened to me.”

Vandy’s day was full of high-end bowling. The curtain-raiser with McKendree was something one might expect to see in an NCAA semifinal as the two powerhouses traded strikes like Ali and Frazier traded punches years ago.

Vanderbilt used a lineup of Cummins, Angelica Anthony, Samantha Gainor, Caroline Thesier and Paige Peters and, except for Cummins’ opening two frames, everyone was on.

Gainor started with the front five, later added a three-bagger for a nifty 243 to lead a balanced attack. Thesier and Peters had their own five-baggers in the high wire match that ended with a 1,129-1,117 Vandy victory.

Vandy kept up the heat in the Tech victory, aided immensely by Peter’s scorching 279. The New Jersey freshman ended with 10 bull’s-eyes in a row, enabling the Dores to cross the 1,100 mark once again.

The Sam Houston State match is always competitive between the two Southland powers. This one was close heading into the 10th but Cummins created some breathing room by striking out and Thesier followed suit by ending with five in a row.

The Bearkats Denise Blankenzee kept Sam Houston in contention with the front six in route to a 249.

Despite her 10th-place individual finish, Peters characterized her day as, “a grind,” noting that in the Monmouth match in which she slipped to a 188, she changed balls three times looking for the right mojo.

“I tend to feel bad if I can’t contribute like everyone else,” Peters admits,“but at the same time we want everyone to put their all into it. I try not to think too much when I bowl. When I over-think it tends to not work out so well.”

Arkansas State’s Brooklyn Buchanan averaged an eye-opening 245.8 to top the individual standings. With 19 of the nation’s Top 25 teams competing, competition was fierce. As an example, No. 2 ranked Nebraska settled for a 10-seed with No. 7 Louisiana Tech getting a 9-seed.

Bracket play begins at 8:30 a.m. Sunday at the Smyrna Bowling Center. Admission is free and Vanderbilt matches are livestreamed on the athletic department’s YouTube page. 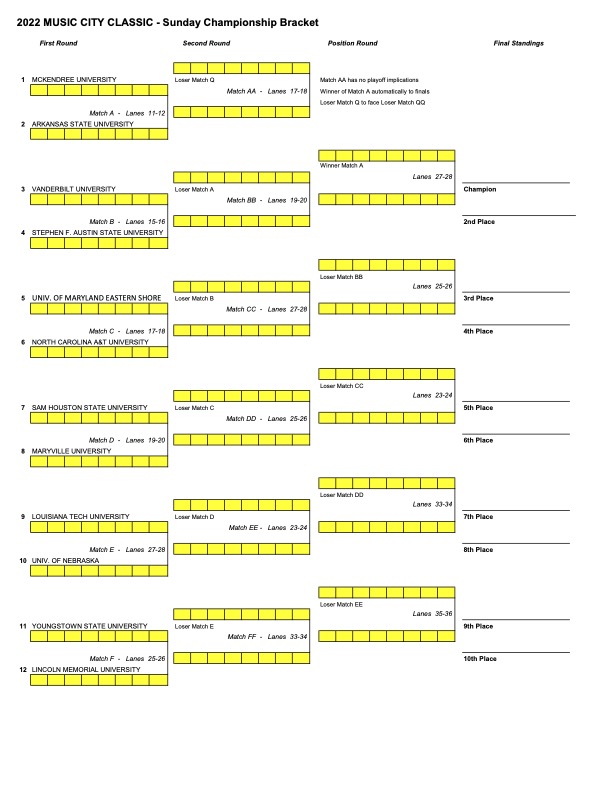