RUSTON, La. — Some fortunate tinkering with the rotation and torrid strike-throwing by a pair of freshmen lifted Vanderbilt into a third-place finish as the LA Tech Invite which concluded Sunday.

Vanderbilt lacked rhythm in losing to the host Techsters in the semifinal 4-1. After winning the first game in the best-of-seven, the young Dores dropped four straight to the free-wheeling home-towners who looked as comfortable on the Lambright Sports and Wellness Center lanes as Vandy did uncomfortable.

The Commodores began the day with a rotation of Jennifer Loredo, Angelique Dalesandro, Caroline Thesier, Mabel Cummins and Samantha Gainor. That unit never found its groove, doing a reasonable job of converting spares but failing to equal the strike strings of Louisiana Tech.

It was time for a change.

Vanderbilt inserted Angelica Anthony into the No. 2 hole, moved Cummins and Gainor up a notch into the 3 and 4 holes, respectively, and dropped Thesier into the critical anchor position. That proved to be difference-making moves.

“We weren’t doing anything that poorly,” Vanderbilt head coach John Williamson said, “but we were out of sorts and seemed to have a lot of anxiety in the settee so we knew something had to change. We made a guess.”

Thesier, last year’s national high school player of the year, had thrown just one strike in the opening setback, but she absolutely lit things up as the anchor by notching 14 strikes, four spares and a single open when she brushed her leg on delivery. She struck out in her first game, helping push Vandy to a message-sending 220-202 win.

“We’ve had conversations with her this fall,” Williamson said, “and they led (Vanderbilt associate head coach) Josie (Barnes) and I to believe that dropping her in the 5-hole wasn’t going to be over her head. Besides, somebody had to be the anchor. If we were going to change, things had to change.

“Her three strikes in the 10th of that first game gave her a lot of confidence.”

Loredo’s play as the leadoff was nearly as impressive. The Fresno, California, lefty had nine strikes, four spares and just two opens in the SFA game, getting her team off to upbeat starts in many games.

“Jenn’s situation is a lot like Caroline’s,” Williamson said. “The leadoff person sets the pace and Jenn has energy and intensity that is very helpful. She has a good personality. It didn’t take us long to figure that out.”

The SFA game quickly turned into a tense affair with the two Southland Bowling League rivals duking it out on the lanes. Vandy jumped out to a 2-0 lead but the Lady Jacks fought back to win three in a row and were on the cusp of a victory.

The sixth game had a nail-biting finish.

With a win giving SFA the match, Vandy got a critical strike from Thesier in the 10th while the Jacks’ Carlene Beyer, who had been spectacular in the match, was unable to match it. Thesier could have won the game for Vandy but her second ball resulted in a picket fence split, her only glitch of the match.

The Mooresville, North Carolina,  product picked up just two pins on her spare try and it ended in a tense 185-185 tie.

The Commodores regrouped and won Game 7, forcing its second modified Baker tiebreaker in two days. Like a shootout in soccer, these 5-frame units are designed to end matches quickly. Sometimes a team can go through an entire year without a tiebreaker and, at this event, Vanderbilt had two in two days.

“We didn’t have to talk to them today,” joked Williamson, who noted yesterday that Vandy’s limited practice sessions for COVID-19 protocols prevented the team from rehearsing tiebreakers. “There was some tension because SFA was spotty hot and you knew you couldn’t make mistakes and expect to win.”

Loredo got Vandy off right with a strike, Anthony spared and Cummins and Gainer struck. SFA could muster just four straight spares. Thesier went spare-strike while Beyer went strike-spare for a 109-105 win.

Cummins was named to the all-tournament team for her fifth place individual finish yesterday. 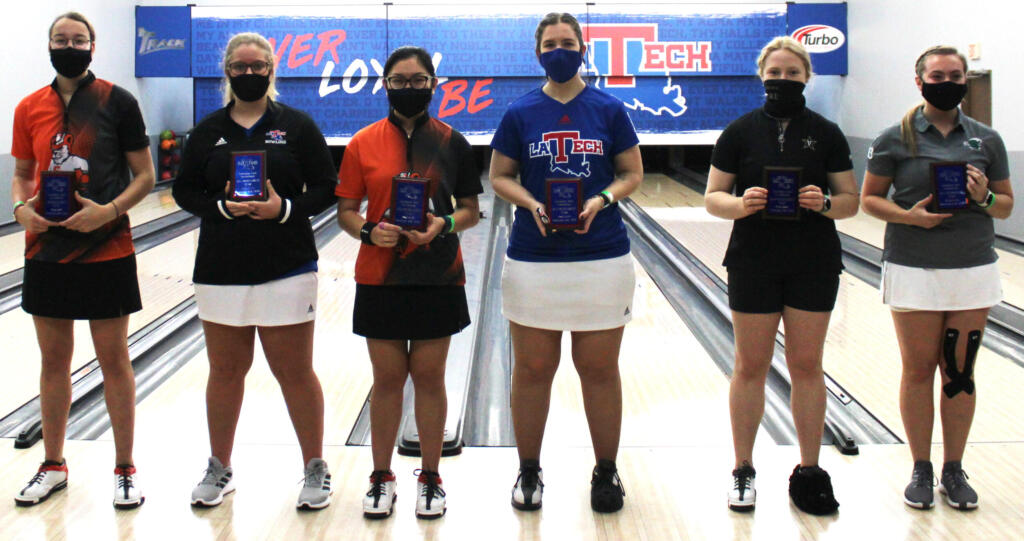