VUCast Extra: We Are the Champions |

OMAHA, Neb. (AP) — The talk at the College World Series was about how few home runs were hit at TD Ameritrade Park.

Well, one was hit Wednesday night — and the folks in Nashville undoubtedly will be talking about it for a long time.

John Norwood’s tie-breaking homer in the top of the eighth inning carried Vanderbilt to a 3-2 win over Virginia in the third and deciding game of the CWS finals, giving the Commodores their first national championship.

“I thought it was gone, but you never know in this park,” Norwood said. “I was just hoping it went out, and if it didn’t, I knew my teammates would pick me up. It’s a home run, but it’s also a team effort to get here. We were confident the whole entire year.”

Norwood turned on Nick Howard’s 97 mph fastball and sent it into the left field bullpen for only the 25th home run hit in the four years the CWS has been played in the cavernous TD Ameritrade Park.

It was Norwood’s third homer of the year, his first since April 19, and Vanderbilt’s first since May 16. It also was only the third home run in 16 CWS games this year and the 22nd in 72 games by the Commodores (51-21). 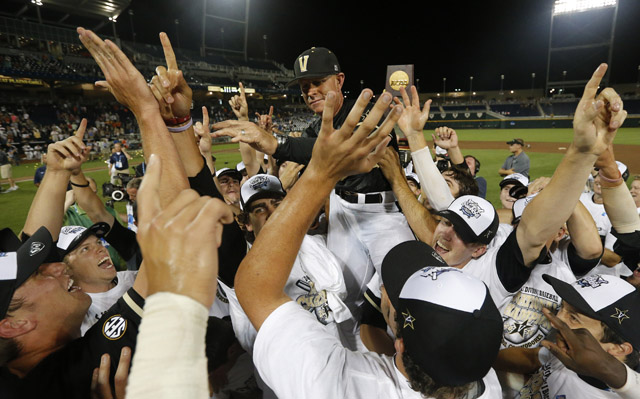 “I was praying it was gonna be gone,” Vandy’s Tyler Campbell said, “and to see it land in the bullpen was awesome. Obviously, Virginia is a tough team and we still had to come out in the ninth and play hard until it was over.”

The Cavaliers (53-16) loaded the bases with one out in the eighth when Adam Ravenelle hit Kenny Towns. But Mike Papi was forced out at home on a chopper to Ravenelle, and Brandon Downes grounded out.

The title, secured when Ravenelle struck out Daniel Pinero, is Vanderbilt’s first in a men’s sport. The school’s only other title came in women’s bowling in 2007.

“This dog pile was by far the best,” first baseman Zander Wiel said. “These guys are my brothers and to celebrate this with them is just incredible. It’s just so special to be a part of history. Everybody here represents Vanderbilt in the best way, and I’m glad to be a part of the first men’s national championship in history.”

Vandy second baseman Dansby Swanson was chosen the CWS Most Outstanding Player. Swanson batted .323 in the CWS, scored five runs, drove in two and stole three bases. He played flawlessly in the field.

“When you’ve got guys backing up each other like we do, anything is possible,” Swanson said.

After the last out, Vanderbilt players grabbed the championship trophy and hoisted coach Tim Corbin on their shoulders.

“Every coach, you immerse yourself in the kids and they become more than baseball players; they become your sons,” Corbin said. “This is a nice feeling. It’s good to watch them celebrate achievements.”

Hayden Stone (4-0) relieved starter Carson Fulmer with one out in the sixth and allowed two hits before turning the game over to Ravenelle after Virginia’s first two batters reached in the eighth. Ravenelle earned his third save of the CWS.

Howard (2-2) came on in the eighth after Artie Lewicki had pitched six innings of four-hit relief. He left a fastball up that Norwood put over the fence, just right of the 335-foot sign.

“You’ve got to credit John Norwood,” Virginia coach Brian O’Connor said. “The pitch was up in the zone and he took an aggressive swing and hit the ball out.”

Virginia broke through against Fulmer to tie it 2-2 in the sixth when Kenny Towns’ bases-loaded grounder hit shortstop Vince Conde’s glove and bounced off for an error.

Vanderbilt led 1-0 in the first after Virginia catcher Robbie Coman sailed a throw into center field trying to catch Bryan Reynolds stealing. Swanson, who was going to third on the double steal, continued home.

Another error in the sixth set up Vanderbilt’s second run. Norwood grounded to third for an infield single and wound up on second after Towns’ throw in the dirt skipped past first baseman Mike Papi. Norwood later came home on Conde’s deep grounder to shortstop.

“An outstanding final series between the two of us,” O’Connor said. “Unfortunately in sports, somebody’s going to come out on the wrong end, and we came out on the wrong end tonight. The University of Virginia baseball program will be back here in Omaha at some point, and maybe the next time we can win it all.”