CORAM, N.Y. — Vanderbilt won a tense tiebreaker against Tulane and rallied from behind to defeat Youngstown State to capture the championship at Adelphi’s Dezy Strong Classic.

The title is the 41st in program history and while the Commodores led the 16-team field from wire-to-wire, Sunday’s wins in the best-of-seven Baker format did not come easily. 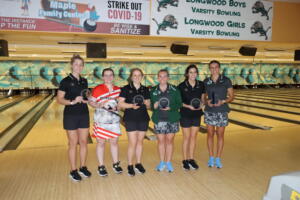 The day began with a face off against No. 2-seeded Tulane, a match that swayed back and forth starting with a tie and ending in a tie-breaker. The Commodores began with a rotation of Angelica Anthony, Samantha Gainor, Amanda Naujokas, Paige Peters and Mabel Cummins. Three games in Vandy inserted Caroline Thesier and Angelique Dalesandro into the 2 and 3 holes and that quintet went the distance.

Vandy eked out a 204-203 win fourth Baker to take the lead but the Green Wave battled back for a 3.5-2.5 lead. The Commodores salvaged the seventh game, sending the outcome into a modified Baker tiebreaker.

Although the Dores struck three times in the first four frames, an open in the second brought the outcome down to a dual of anchors with Tulane up one pin. Cummins went strike-9 count while Tulane’s Madison McCall went strike-7 for a white-knuckle 107-105 margin that provided an automatic berth in the title match.

“We were pretty competitive in the Tulane match,” Vanderbilt head coach John Williamson said. “And it was nice to see we woke up after sleepwalking those two games against Youngstown State.”

In collegiate bracketing, it’s standard for the advancing team in the championship match to be paired with the last place team in the field so that it does not have the disadvantage of sitting idle awaiting its opponent.

Vandy defeated Bloomfield 4-1 in this interim using much of its deep roster in the process.

It was on to the title match.

Seventh-ranked Youngstown State arrived having beaten Stephen F. Austin and Tulane and the Penguins started fast with a pair of wins as Vandy posted mediocre scores of 157 and 182.

“There is often an emotional advantage for the advancing team over the team that wasn’t tested hard in the second round,” Williamson said. “There really isn’t a way around it in this format but we were essentially off for two hours while Youngstown was coming in after two good wins.”

Momentum shifted in the third Baker. Vandy got a three-bagger in the sixth-seventh and eighth and managed a 197-190 win. With the tide now turning, the Commodores gained steam and finished with games of 209-235 (getting the front six) and 227, closing with five strikes in its last six shots for a solid win, 4 games to 2.

Williamson pointed to seniors Dalesandro and Anthony as significant to victory Sunday.

“Angelica and Angelique helped push us to the better side,” he said. “Angelique keeps her cool. It’s nice to have someone who’s been in a lot of important matches over the years when things get tight.”

Anthony, Cummins and Peters were all named to the all-tournament team based upon their second, fourth and sixth place individual finishes Saturday. Anthony’s big day included the memorable 300 game, just the second in school history.

The perfect Sunday slate runs Vandy’s season record to 21-5. Vanderbilt is now off until Nov. 12 when it travels to Kenosha, Wisconsin, for the SFA Ladyjack Invitational.