Early in his career, Scott struggled to make an impact at flanker. He just needed to switch positions.

In 1983, Scott blossomed after moving to tight end. Scott hauled in 70 receptions and nine touchdowns to tie the existing NCAA record for catches by a tight end. He was named First Team All-America by The Sporting News.

Scott followed up that performance by achieving 54 receptions and eight TD catches in ’84.

As a sophomore in 1982, Scott contributed 21 receptions in the Commodores’ Hall of Fame Bowl campaign. 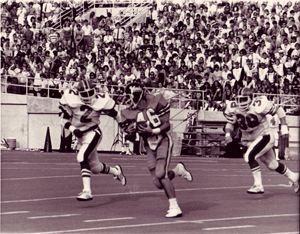