NASHVILLE, Tenn. — There was that one time De’Rickey Wright thought he would try boxing. After all, he said, he likes to branch out and try new things.

So after sparring for a bit with a partner, a friend’s older brother stepped into the ring. One vicious uppercut later, Wright’s mouthpiece was flying across the room and his boxing days were over.

The 20-year-old recounts that tale with a laugh and a smile, a smile so infectious and frequent that it may be hard to fathom what Wright has gone through—how he is still present, still thriving, still persevering.

“I’ve been through a lot of hard stuff,” he said. “These things are just a knock on the shoulder. I can handle anything.”

One of the Guys From Gadsden

Wright, from Gadsen, Alabama, remembers being introduced to football around the age of 3 or 4. He also played a little basketball, baseball, tennis in addition to that one day in the boxing ring.

The now 6-foot-4, 230-pound safety came up through the game of football as a quarterback. It wasn’t until the summer before his junior year of high school that Etowah High School (Alabama) head coach Drew Noles suggested Wright play some defense. 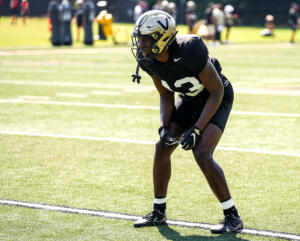 “Ultimately, he hated quarterback,” Noles said. “His 10th grade year he started at quarterback for us. We went to the third round of the playoffs and he had a good year, but he was more an athlete than a passer. He had a good arm, but nobody wanted to rush him because him getting out of the pocket was such a weapon. He would have rather played receiver or defensive back.

“His 11th grade year we had a 10th grade quarterback that had matured and we felt like was able to control the game enough to where we could move (Wright) to defense. Man, it paid off huge dividends. Safety is a hard position to dominate a game from, but he did. He was a ball hawk. He’d go get it and was real physical coming downhill. Fun person to coach.”

Wright said though he’d received some recruiting interest as a sophomore, he’d never been given a scholarship offer. But in 2018, he became one of the state of Alabama’s most-coveted prospects.

Alabama, Mississippi, Mississippi State, Kentucky, Nebraska, LSU, Notre Dame and Miami (Fla.) all wanted Wright to wear their colors. In March 2019, Wright gave a commitment to Alabama, but three months later he decided Ole Miss was the right place for his future.

In December of that year, an Ole Miss coaching change led to Wright’s third commitment—this time to Vanderbilt, where he would officially sign. 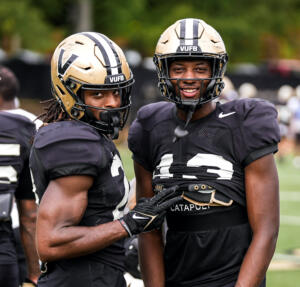 “(Former Vanderbilt assistant) coach (Marc) Mattioli had always kept an eye on me, even when I was playing quarterback,” Wright said. “Then when I made the switch from quarterback, he was on me heavy. Then I started making plays, so Vandy ended up being my first SEC offer. They just kept on. When I committed to Alabama, they stayed in touch—and then with Ole Miss the same thing.”

In the middle of the COVID-19 pandemic in June 2020, Wright packed his things and headed for Nashville to begin life as a Commodore. That life, in so many ways, would never be the same.

For the next several years, Wright said, he and Henderson bounced from home to home, staying with an aunt or a great grandmother or grandmother Joyce Wright. De’Rickey recalled sleeping on floors with a single blanket or returning to wherever he and Henderson were staying to find the lights shut off and the refrigerator devoid of food.

Those tough times, however, forged a bond between Wright and Henderson. He calls himself a “mama’s boy.” 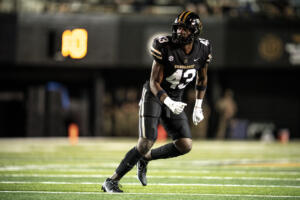 “I get a call at 3:15 in the morning. My nana (Joyce Wright) was like, ‘Hey we’ve got to go to the hospital,’ ” Wright said. “Knowing me, I was optimistic and like, ‘Hey maybe it’ll be some good news.’ We got there, and they broke the news. That’s the hardest day of my life.”

Henderson had been admitted to the hospital days earlier after suffering a brain aneurysm. Wright had left Vanderbilt and was actually taking final exams at home at night while he awaited word on the health of his mother. But on that fateful day, Wright and his sisters, Shi’Nita, Sha’Nora and Latrice, learned their mother had died.

“Of course I was sobbing, but I was trying to make sure my sisters didn’t see me cry. How can I stay strong for them?” Wright said. “Yes, there was a lot of stuff going on in my head, but it was more about, ‘How am I going to provide and be there for my sisters and make this easy? Even though it’s going to be hard, how can I make it as easy as possible for them?’

“She runs through my mind every second of the day, but I’ve learned to deal with it and treat it more as if she’s with me and not away from me.”

Alone in the Aftermath

The loss of Wright’s mother was difficult. The weeks and months that followed didn’t provide much respite.

Wright was coming off a freshman season on the field that was anything but enjoyable. The Commodores went 0-9. He rarely played as he dealt with a hamstring injury and COVID-19 policies that quarantined him twice.

When Wright returned to Nashville in January 2021, the head coach and many of the assistants he had played for just weeks ago had been replaced by head coach Clark Lea and his staff. 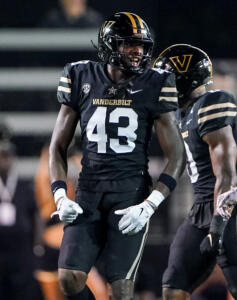 “Witnessing someone that young go through those stages of grief for their only single parent, but then also filling the responsibility of being the older sibling of three—he carried the burden of trying to help them both financially and emotionally from afar. It was really difficult for him,” Vanderbilt student service coordinator Sarah Gibbons said. “His grades very much suffered as his grief cycled in and out.”

Trying to keep his head above water academically throughout the spring and summer of 2021, Wright found football success still relatively out of reach during the season. He recorded 24 tackles and forced a fumble his sophomore campaign, but he missed four of 12 games—including the finale at Tennessee.

“They told me, ‘We want this to be your home. They kept on me,” Wright said about his relationship with Vanderbilt football during that tumultuous time. “It wasn’t like, ‘Oh he’s in the portal so we’re just going to forget about him. We’re going to help him if he needs help, and we’re also still going to be there for him.’ They’re amazing, and I’m blessed to be here.”

As Wright was getting recruited all over again, he remained enrolled at Vanderbilt. And with the guidance and assistance from folks like Gibbons, Lea, Vanderbilt Director of Player Development Earl Bennett and Director of External Operations Charlotte Siegel, Wright never strayed too far from the Commodores. 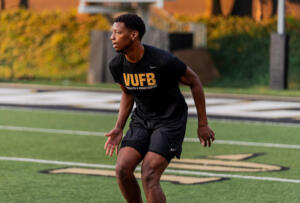 He watched from the sidelines as Vanderbilt went through its spring practice. Then, in April, he withdrew his name from the transfer portal.

“I’m blessed. To be able to play football, to be here, to win? Right now I’m excited, ecstatic just to have this opportunity,” he said. “Where I come from not a lot of kids are able to do this.”

In June, two years after Wright originally stepped on campus, Lea officially reinstated Wright into the Vanderbilt program. And despite breaking a finger on his left hand, a finger that now has a plate and 12 screws in it, Wright quickly proved his worth as a starter at the defense’s anchor position ahead of the 2022 season.

In the classroom, Wright began to have interest in the field of sociology; he chose it as his major. Gibbons said Wright had a 4.0 GPA after completing two summer courses.

“About two weeks ago we had some (professional) scouts asking us, ‘Who is going to be the individual that when they walk across that (graduation) stage you’ll have tears in your eyes?’ I didn’t even hesitate to say (Wright). I’m just so proud,” Gibbons said. “I think about how impressive it is to be an example for his younger siblings, to be an example on the field and in the classroom, considering all the unfortunate life circumstances that have been thrown at him. He’s a great kid. I could not say enough positive things about him.”

Wright’s 16 tackles are the fourth-most among Commodore defenders. He has three pass breakups, notched a tackle for loss against Elon and, Saturday at Northern Illinois, recorded his first interception to seal a victory on the road.

It’s a return to form that Vanderbilt senior Justin Harris, a high school teammate of Wright’s, has been thrilled to witness. 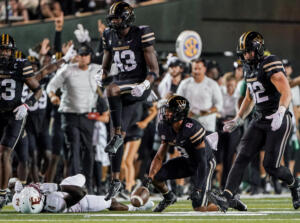 On Saturday, Wright will return to his home state when Vanderbilt takes on No. 2 Alabama at 6:30 p.m. Noles said he and his family are hoping to be there in person to watch a young man they saw grow up before their eyes before he continued that growth at Vandy.

“We love him,” Noles said. “I watch him every chance I get.”

Wright said that in the aftermath of his mother’s passing, he and his sisters struggled with questions of, “Why us?” and “What do we do now?” He also admitted that in the months that followed December 2020 he dealt with his own mental anguish and grappled with the guilt of being away at college while his family struggled at home.

Contemplating ending his college career early was met with stern resistance from that family, however, and Wright said his mom would have, “slapped me across the head” for even considering such a notion.

Wright also makes that remark with a smile. It’s his mother’s smile, and it lives on in him.

“She would be excited,” he said when asked what she would think of where he is today. “Still being here, having the ability to become the first person in my family to have a college degree? She’d have a big smile on her face.” 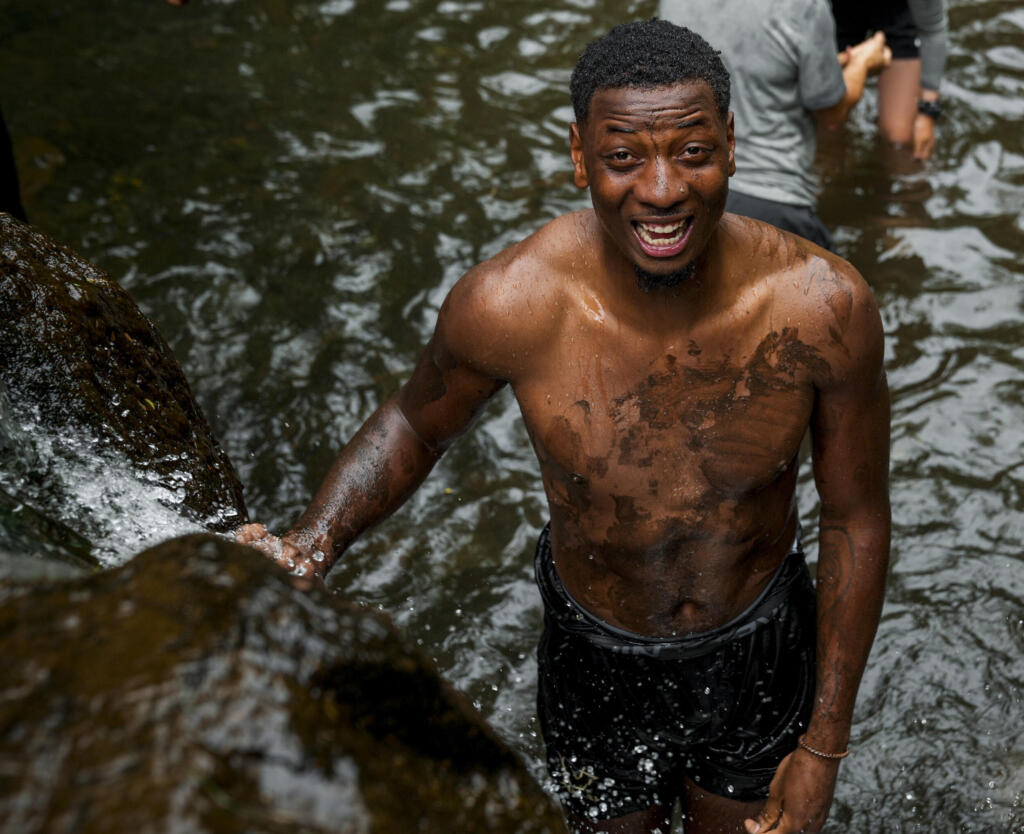