Warden of the Offensive Line

NASHVILLE, Tenn. — Four years ago Michael Warden bet on himself.

He was going to attend Vanderbilt University first and foremost as a student. He had put his heart and head behind that decision 100 percent.

Then there was football.

“I figured that I could walk on just because I had some (recruiting) attention coming out of high school – not SEC attention obviously. I thought in a walk-on capacity I could get on here, I just had to get in contact with the right person,” Warden said. “It was just like, ‘pick the school first and football will follow. If it works out great and if it doesn’t it’ll be what it’ll be.’ ”

Warden arrived in Nashville in 2018 and followed through with his plan. He contacted the football staff on possible opportunities to join the team. A direct message via social media followed by a phone call by a member of the staff led to Warden’s chance to be a Commodore.

Three full seasons later, however, playing for a third offensive line coach and a new head coach, having shared a locker room with dozens of players and position mates, Warden began the 2021 campaign still having never seen the field for a single play. 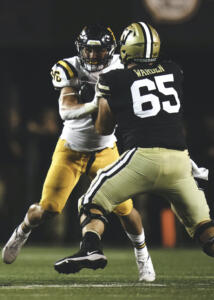 “First and foremost it’s because I love football,” Warden answered when asked why he kept coming back? “And then there’s an element of, ‘What else would you do?’ Also, it’s the guys, it’s the coaches – especially now with the change. It was a no-brainer to stick around and help build this thing.”

On Saturday, at Vanderbilt Stadium, Warden not only played for the Commodores against East Tennessee State but he started at center. Having won the position battle throughout fall camp due to his veteran savvy and on-field aptitude, the 6-foot-2, 286-pound Warden will be a footnote in Vandy history as the man who snapped the first offensive play in the Clark Lea Era.

Warden, also penciled in to start Saturday’s game at Colorado State (9 p.m. CT, CBS Sports Network), admits the night before and the hours leading up to kickoff against the Buccaneers there was certainly some nervous energy. His preparation helped his performance.

“I would say our pregame routine, our warmup routine, it’s so systematic that once I kind of got into it the first couple snaps just kind of went,” Warden said. “The preparation took over and my body took itself through – not unconsciously but you were just kind of trusting the training and going through it. So I would say overall I felt calm and felt pretty confident once we started getting into the warmup routine and getting into our pregame rituals.

“Playing next to the guys I get to play next to, especially a vet like (guard) Cole (Clemens), gives me a huge sense of confidence on the field as well.”

Warden excelled at Summit Country Day, a small school outside of Cincinnati, Ohio. He was a first-team all-state selection as a left tackle and defensive tackle while also competing in wrestling, lacrosse and track and field.

He fielded some scholarship offers from Football Championship Subdivision programs, but brother Matthew (now playing football for the University of Chicago), sister Emily (a former Summit Country Day salutatorian), his parents and high school coaches encouraged him to follow his dream to Nashville.

Warden began his Vandy football career at guard before switching to center as a sophomore. Last weekend he switched from reserve to starter. 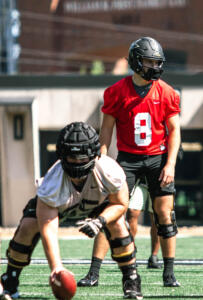 “Mike’s a guy who is extremely smart. He’s a student of the game,” Vanderbilt offensive line coach AJ Blazek said. “Mike is a guy who has continued to develop, he’s got four years in college football, he understands situational football, the severity of each situation, what’s going to happen. The game has slowed down enough for him to where he can predict what are we going to see from the defense and he has remembered what he’s seen the days before.

“So you see that experience show up. And that’s really the piece right now that is helping him the most is he’s playing like a veteran.”

Warden, who has even swapped book recommendations with Lea recently, is majoring in both economics and classical and Mediterranean studies – the former being more practical and the latter a study for pleasure. He hopes to find a graduate program after his Vandy playing days are done.

But his playing days aren’t over just quite yet. Vanderbilt is glad they’re not.

“Michael’s one of my best friends, so I might be a bit biased – I think Michael has some of the best feet I’ve ever seen on an offensive lineman,” Clemens said. “He’s a smaller guy, obviously, so he’s always in the right position with his body. His hands, feet and head are always in the right place. He’s just a lil’ baller.”