Under a New Roof

NASHVILLE, Tenn. — Ted Roof has lots of pieces to work with when Vanderbilt spring football starts next week.

But the Commodores’ new defensive coordinator will be focused on staggered improvement and communication more so than personnel during the next five weeks.

“Get our base system in. Make sure from a fundamental standpoint that we grow. And strain. And play fast,” he said about his mindset going into spring practice. “I want us to accomplish that. And we’re going to have do that by making daily, incremental improvements.

Roof came to West End after a successful season at Appalachian State. The veteran coach has also worked as defensive coordinator at North Carolina State, Georgia Tech, Penn State, Central Florida, Auburn and Minnesota and was the head coach at Duke from 2004-07.

He said he’s enjoyed getting to meet and work with head coach Derek Mason’s staff in recent weeks and is enthused by all the returning players Vanderbilt has available this spring and the many more who will be ready to go in the fall.

“You watch tape and you see guys run around in shorts, but until you’re actually on a practice field and see guys practice the game of football it’s hard,” Roof said of his pre-spring evaluation of the Commodores. “I’ve been real pleased with the attitude and the way they’ve responded. Just looking forward to getting better – because that’s what we have to do.” 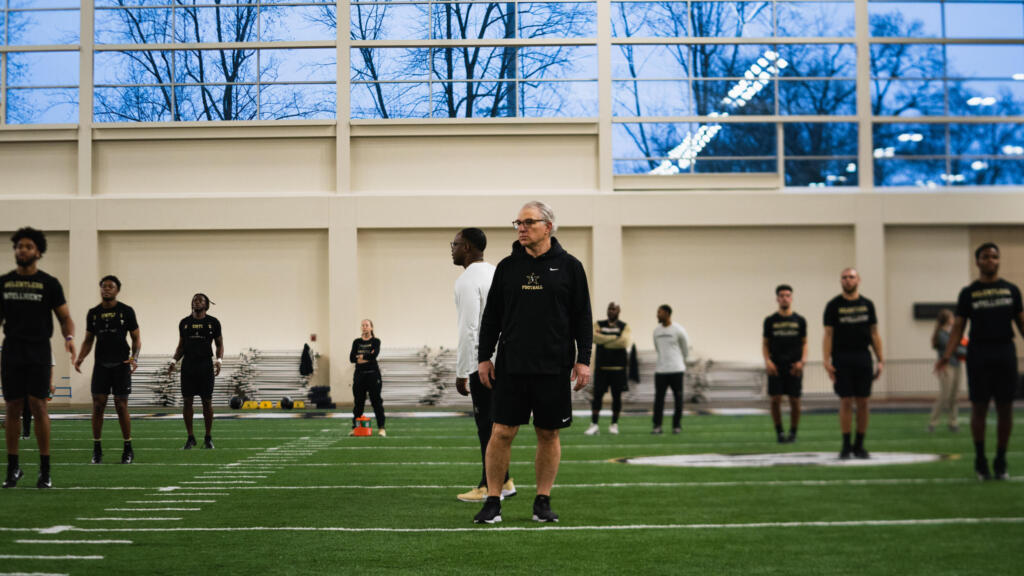 Roof said he addressed his defensive unit this offseason and explained how much of spring practice will be about “learning a new language,” so everyone is on the same page come Sept. 5 when Vanderbilt hosts Mercer in Vanderbilt Stadium. The upcoming spring practices will be formidable for the Dores in becoming fluent in translating what is said, when it’s said and what it all means.

Then, the Vandy defense can truly move forward.

“We all have to have an invested commitment in learning the language,” Roof said. “At the same time, if there’s carryover concepts to what’s been done here in the past, it’s easier for a couple of us to learn it instead of 50-something people to learn it.

“We just want to do what’s best and what’s the simplest for our players that allows us to play as fast as we can play and be the best version of us.”