Undefeated Day at the Lanes in Louisiana

HARAHAN, La — Vanderbilt’s valiant rally to climb into the Colonial Lanes Classic championship bracket fell just short Saturday, but the Commodores were still impressive with a perfect 5-0 worksheet improving their two-day mark to 9-1.

Teams needed to be among the top four to have a shot at winning the tournament Sunday. 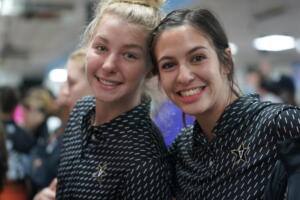 “We gained some valuable experience in winning those close matches,” Vanderbilt head coach John Williamson said. “For the first tournament of the year it was a good day, it’s been awhile since we’ve been 9-1. But this pattern is too playable to shoot 930 and we did that three times in two days and that’s what kept us out of the top four.”

With the exception of a hum-drum 930 traditional team game total in a winning effort against Florida A&M – which basically cost the Dores the pins it needed to climb into the upper echelons – the fourth-ranked Commodores put up solid scores, especially for its first competition of the season.

When the Dores were hot, they were on fire and the primary arsonists were Samantha Gainor and Angelica Anthony, who at one time ran off a string of 17 strikes in a row over the course of two matches. Anthony began the Lincoln Memorial match with the front nine but split and opened in the 10th for a 262.

Gainor had big-time scores of 228-246-257 and 237, offset by one clunker 162, but still won the tournament’s individual championship by a single pin. It was the graduate student’s second win in her All-American career.

“It felt pretty calm and simple today,” Gainor said. “We had the team energy and with having someone like Angelica throwing strikes up front, it made my job easier. I was able to get into a zone and keep repeating quality shots, making it easier to stay clean.

Said Williamson: “Their shot repetition was impressive. Angelica picked up where she left off yesterday and when she didn’t strike it was when she wasn’t aggressive enough. She tried to guide the ball in the 10th when she had the front nine, for example. Sam gave us a really good day like she has so many times.” 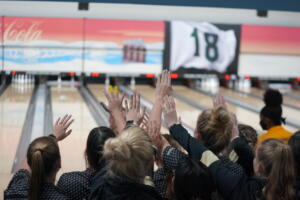 Vanderbilt had just beaten UMES 1,014-930 when Williamson gathered his troops for what appeared to be a lengthy monologue between games. While there is occasionally a brief word between games, this talk was longer.

“Basically I told them they had the ability to make a run at the top four and we’d have to put two big games together,” Williamson said. “And we talked a little about our practice sessions and the resources we have on campus to become the best versions of ourselves.”

The Commodores seemed to respond, posting 1,114 and 1,046 scores to make leaderboard gazing interesting.

While it was easy to gaze at Gainor’s scoring and Anthony’s blistering strike binges, it should not be lost that senior Angelique Dalesandro and freshman Paige Peters came off the bench at various times to contribute needed strength. It was not lost on Williamson.

Dalesandro helped make the day’s finale against SFA, a 1,046-990 win, appear easier than it was by closing with a four-bagger and a hefty 234. Peters had a clean 216 in that contest and contributed to the 1,119 total against Lincoln Memorial.

“I thought what both Paige and Angelique showed coming off the bench was confidence,” Williamson said. “They came in and threw shots. It’s nice to have people that can do that. Angelique is a senior and she could have pouted about not being in the lineup sooner but she got in ready to go and bowled well which is what we expect her to do.”