The Pierce is Right

Vandy senior wideout emerging as a top playmaker for Commodores

NASHVILLE, Tenn. — Chris Pierce thinks his stunning, one-handed catch while reaching around the back of his defender Saturday at Colorado State was his best.

His father disagrees, Pierce said Tuesday, arguing Pierce’s maneuver to go airborne for a reception down the sideline and still manage to keep a foot (maybe two) inbounds was top quality.

Quarterback Ken Seals just thinks he needs to go a better job of making catchable throws to the veteran wide receiver. But maybe it won’t matter the way Pierce is going up and getting the pigskin these days.

Pierce with at least four receptions in each of Vanderbilt’s first two games pic.twitter.com/5OXd2lP8UQ

Pierce leads the Commodores ahead of Saturday’s matchup with Stanford at 7 p.m. Saturday with 129 receiving yards and 16.1 yards per reception. His highlight-reel catches at Colorado State helped light a fire under the Commodores (1-1) during a 24-21 victory.

“Footwork creates separation. On top of that separation creates opportunity. Chris has good hips, he has quick feet and he’s able to separate at the top of routes,” Vanderbilt wide receivers coach David Raih said. “You don’t have to be a 4.3-guy to separate. What you have to have is good feet. Chris has really good feet. We’re just honing in on it every day trying to get it better and better for him to play at his highest level.

Raih knows a good receiver when he sees one having directed some of the best while with both the Green Bay Packers and Arizona Cardinals in the NFL. He could very well have another pro on his hands if Pierce continues to perform at the level he’s at through two games in 2021. 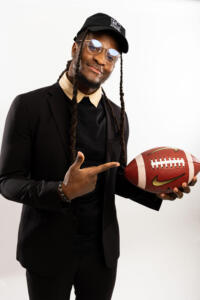 Pierce has made four receptions in each game this season marking just the second time in his career he’s had consecutive outings with at least four grabs in each. The Virginia native has shown flashes, like his 133-yard outing at Purdue in 2019 or his or his streak of four straight games with a touchdowns in 2020, but there’s a marked difference about his play thus far in 2021.

The 6-foot-4, 235-pound wideout has emerged as the team’s No. 1 option at the position. Being the go-to guy is one of the reasons he took advantage of an extra season of eligibility.

“I feel like I had unfinished business left here,” Pierce said. “I believe in coach (Clark) Lea’s vision. I think he can really build a legacy that I want to be a part of. And I’d be lying if I said I didn’t want to improve my chances at the NFL. I think the best way to do that is with coach Lea.”

Pierce made his debut against Middle Tennessee on Sept. 1, 2018, when he caught a 17-yard touchdown pass. He wouldn’t find the end zone again until that aforementioned Purdue game more than one year later.

After a quiet first three games of 2020, Pierce turned a corner in his production that he somewhat attributed to being more physically fit. He has carried that over into his final go-round with the Dores.

“Unfortunately one of the biggest things for me last year was just getting healthy,” Pierce said. “I had a big, clunky knee brace that didn’t really help me out much.

“(This season) coach Raih has also been to the places where I’m trying to go and he’s taught me so much already and I think working with him I’ve learned so much that I’m glad I got a chance to come back and learn. So working with coach Raih and the new offense I think this year I’m really going to be able to showcase what I can actually do and that will push me to the next level.” 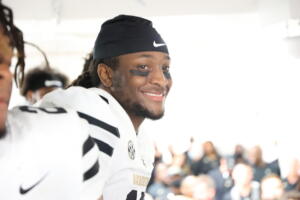 Pierce and the Vanderbilt offense now face a difficult challenge in Stanford (1-1). The Cardinal secondary has surrendered just one passing touchdown in two games, has picked off two passes and is allowing only 6.6 yards per attempt.

And Pierce knows his early production will equate to more attention and he expects the opposition to throws its best defensive backs, schemes and coverages his way.

“I’m open to it,” Pierce said. “This is why I came here. This is what I want. It’ll just be a bigger challenge for me to accomplish.”