The 'One That Started Things'

NASHVILLE, Tenn. — Thirteen years ago, on May 27, 2007, the Vanderbilt baseball program won the Southeastern Conference Tournament in Hoover, Alabama. It had been 27 years since the Commodores had won that event.

“I don’t know if it was the most-talented team we had, but it was pretty damn good,” Vanderbilt head coach Tim Corbin said. “We had a closer, we had starters, we had guys who played defense – just a really good team.

“You look at that (championship) right there as one that started things for us.”

Vandy has won two national championships and three more regular-season titles, been to the College World Series four times and has played at least one postseason game in every completed season since. That 2007 team, however, is recognized as one that helped lay the early foundation for what is now a college baseball powerhouse.

This is the story of that team – and of that SEC Tournament championship – as told by them.

The Commodores spent much of the season ranked No. 1 in the country thanks to a loaded roster, a 20-0 start to the campaign and an SEC regular-season title. But in the opening game of the postseason, Tennessee starter James Adkins carried a no-hitter through 8 1/3 innings and the Volunteers stunned Vandy.

Corbin: “He shut us down. They were very motivated because they had to win in that tournament and we were just coming off a regular-season championship. They just jumped us. I think they kept continual pressure on us – that was kind of a blow.”

Outfielder and current Vanderbilt volunteer assistant coach David Macias: “It was a blow. We had played so well throughout the year and had just clinched the (regular-season) championship outright and then going down and losing that first game was like, ‘Whoa, this is a little different than what we’ve been used to.’ ”

Pitcher Tyler Rhoden: “You run into a really good pitcher and it’s a great equalizer for even our offense. He just threw a really, really good game – the best game we’ve ever seen against us.”

Rhoden: “We were frustrated about losing it but it didn’t really get us down too much. We knew we were still in it and knew we had to win out. There was a number of times in the season we had won a string of games so in the back of our minds that’s what playing in the SEC prepares you for. Having to string together five, six, seven more wins – we knew we had to take it one game at a time and that’s what we did.”

Infielder Alex Feinberg: “Frankly, I didn’t even remember we lost that first game.”

Now in the loser’s bracket on Day 2 of the tournament, Vanderbilt turned to its ace – David Price. Price threw six perfect innings before allowing a hit in the seventh and finished a complete game in the one-run win. The Commodores scored three in the third and held on after Mississippi State scored two in the seventh.

Corbin: “I think the reason they didn’t panic (after the Tennessee loss) was David Price was pitching the next day. Anytime he was pitching you knew you had a chance.”

Feinberg: “Price was the best teammate I ever played with. He’s the most-talented player I ever played with, but he’s also more immersed with whatever anybody is doing than any other extremely talented player that I played with. When you have a guy like him not only being the physical leader on the team, but also the emotional leader on the team where he didn’t act like or believe he was better than everyone else, that’s not a common dynamic – but because we had that dynamic we had a tremendous platform to build ourselves around.”

Corbin: “Once we won that (Mississippi State) game I felt like we had a chance.” 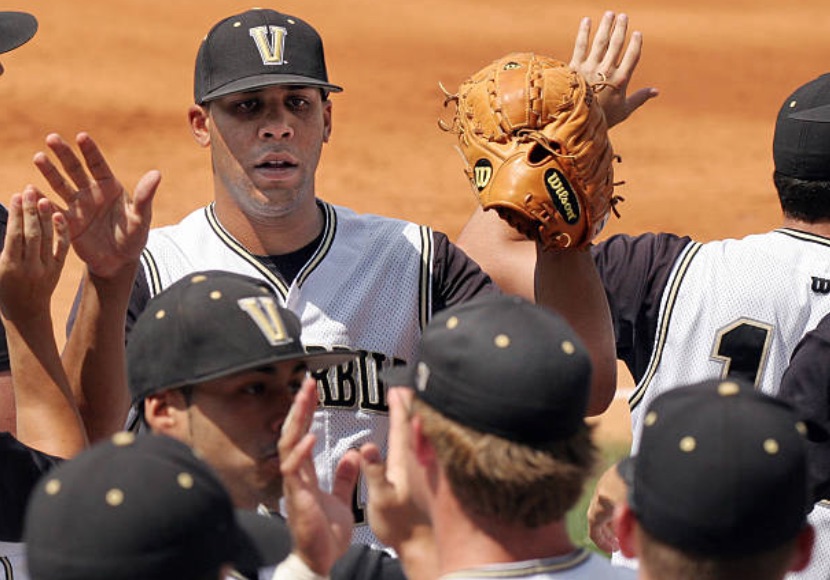 The Commodores survived into Day Three where they enacted some revenge on Tennessee in a 15-2 win. Then on Saturday, May 26, Vandy crushed Ole Miss 13-1 in eight innings before it had had to turn around and face the Rebels again. In a storybook moment, Corbin turned to Jason Cunningham, a former student manager who had pitched less than three career innings his entire college career – he held Ole Miss scoreless for 4 2/3 innings.

Rhoden: “We were running out big arm after big arm and Ole Miss had a really good offensive team so it was like, ‘Hey we’re going to throw something at ‘em they haven’t seen since high school.’ Jason threw strikes, didn’t throw very hard and was left-handed. It just threw ‘em off-balance for a couple of hours so that was pretty cool.”

Corbin: “It was incredible.”

Cunningham after the game in 2007: “I’ve dreamed of the moment a million times last year, but it’s hard to come to grips with the ideas it’s actually happened. It’s been a lot of hard work and I’m glad the coaches gave me the opportunity.”

Down 3-2 in the ninth, and with one out, Macias hit a sacrifice fly into foul territory that scored catcher Shea Robin from third (Robin had doubled to start the inning). But in the 10th, Robin’s throwing error led to a big inning in which the Rebels scored three runs.

Robin would get redemption.

After a Dominic de la Osa solo home run and back-to-back hits from Pedro Alvarez and Ryan Flaherty, respectively, the Rebels made a defensive miscue of their own which allowed a run to score making it 6-5. In stepped Robin.

Macias: “Shea’s ground ball to the right side – I remember that vividly because it was the epitome of a seeing-eye single. It just barely got through. But it was enough.” 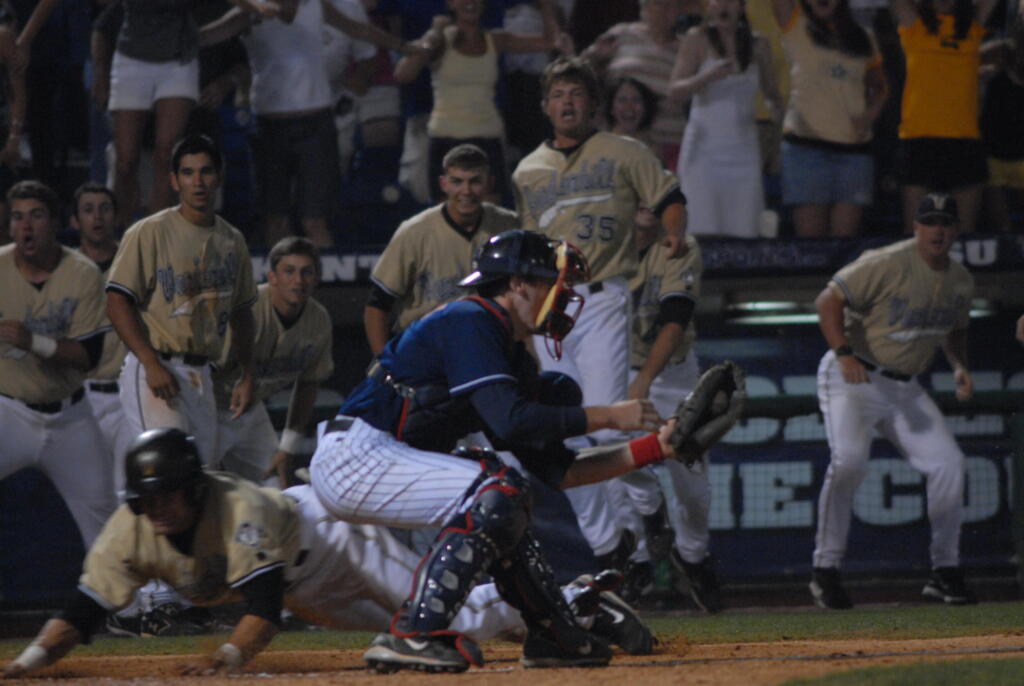 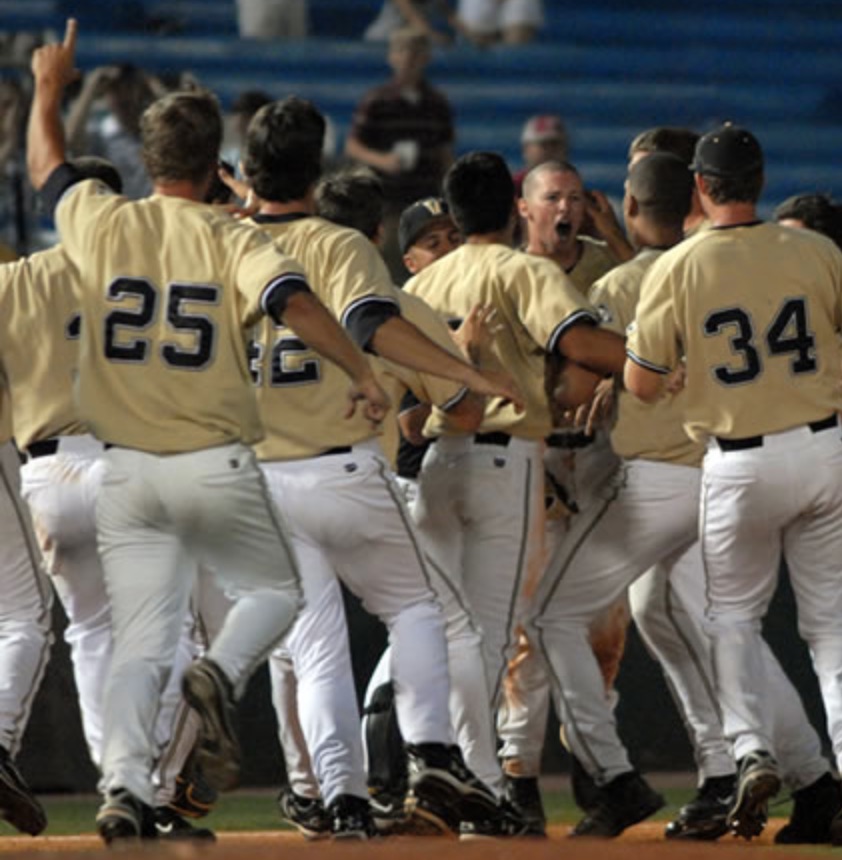 Vandy had survived into championship Sunday where it went up against Arkansas and a young pitcher by the name of Dallas Keuchel. The Razorbacks had only played three games compared to Vanderbilt’s five.

But the Commodores had all the momentum.

Macias: “We were playing on fumes, but the fumes were enough to get us over that hump. We were battle-tested and I think we had confidence going into that final game.”

Rhoden: “After we beat Ole Miss we were on the team bus heading back to the hotel. I had started the year before in the championship game and it didn’t go well. I just met (pitching coach Derek Johnson) at the front of the bus before he could sit down and told him I was ready to go and I wanted to throw. It was just one of those things where my mindset was we needed a good arm, a fresh arm – and I was ready.”

Macias: “He’s an example of the kind of leadership we had on that team. He was a senior and had all those years of experience being a part of the really successful teams in 2003 and ’04. It was really neat to see him come up big in that final game.”

Corbin: “He was the only real choice to start the game, but I think what it was also was that he was a kid we had a lot of confidence in because he was a calm kid. He went deep in that game – he kind of had to.”

Vandy scored four in the first off Keuchel and then added some insurance in the seventh and ninth. Rhoden went 6 2/3 innings – a career-long outing – and Brett Jacobson closed out the final 2 1/3. Macias, Feinberg, Flaherty and Matt Meingasner all had two hits each in the championship win.

Rhoden: “When Corbin was recruiting us, he made it very clear – we were there to win championships. That was our goal. We wanted to win the SEC championship and we wanted to win the College World Series. We fell short of that, but I would like to think we paved the way for the team in 2011 to get there and the one in ’14 to take it home for the first time.

“It meant a lot to the community and it meant a lot for us. We were very purposeful. That was not, in our minds a least, a luck scenario. From the time that each one of us stepped on campus that was our goal. Every day that’s what we worked for is we always want to improve and be better, but inside those walls of that locker room it was crystal clear – we’re there to win. That’s what we’re focused on. If we’re playing in the SEC Tournament, we’re there to win.”

Feinberg: “We hadn’t won anything as a University at the time. We didn’t have the expectation that, ‘Yeah we’re the No. 1 team and everything is going to go exactly as we imagined,’ because we just didn’t have that in our organizational memory. Everything was about taking the proper approach. We knew we were talented, but we also knew that coach Corbin and everyone on the team would expect us to take a certain approach that had been hammered into us each of the prior couple years.”

Macias: “Every week of that year just kept compounding and compounding. You started just to see what ‘Corbs’ was essentially envisioning when he came to Vanderbilt from Clemson. I know he was envisioning something like this because just of the way he approaches every day. You started to see that that year.”

Rhoden: “That was a very special time for us. That was a big reason why a lot of us came there. We wanted to come to a great University, great school and a great community and be a part of bringing something to it that hadn’t really been there in a long time. That was really special.” 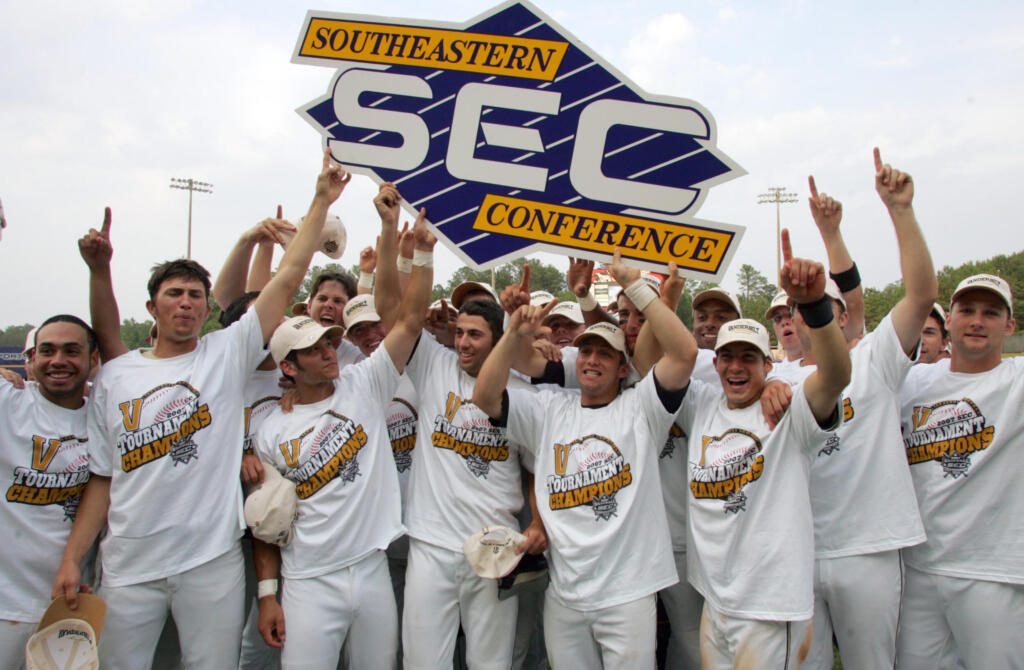 November 12, 2020 Kemp Continues to Cause Change