NASHVILLE, Tenn. — Those who know Will Sheppard best are not surprised. Those who don’t shouldn’t be.

The emergence of Sheppard as one of Vanderbilt’s top receivers is rooted in the all-too-familiar case of a prospect lost in the shuffle and the circumstances of a program finding a new identity. Those factors have led to the intersection of Sheppard’s rising stardom.

“I’ve always known deep down what I can do and I’ve just been waiting to really showcase that,” Sheppard said.

Now the spotlights are on.

Looked Over in Louisiana

Born in Ruston, Louisiana, Sheppard spent most of his childhood in Florida before returning to the Pelican State in middle school. He had been playing football since about third grade and his passion for the sport had been growing ever since.

At Mandeville High School, a 40-minute drive across Lake Pontchartrain from New Orleans, Sheppard was a tall yet undersized wideout not too dissimilar from the other hundreds of high school football players in the state. There were not many signs to indicate Sheppard would turn into something special.

“When I got him he was 6-3 and maybe 170 pounds. His junior offseason going into his senior year he worked extremely hard in the weight room, put on 15 pounds, came back 185, 190 pounds and really just exploded,” MHS head coach Hutch Gonzales said. “There was nobody in our district, or really anywhere, that we found that could match up with him 1-on-1.

“He had a huge senior year for us. It seemed like every time he touched the ball it was a big play. We were definitely the beneficiary of an extremely talented young man.”

Sheppard’s numbers from his 2019 season are worth a double take.

Still, Sheppard’s phone and inbox weren’t exactly blowing up with college coaches. He had just four scholarship offers from Football Bowl Subdivision programs and none from a Power 5 team. 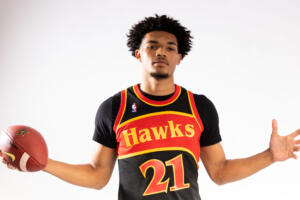 Sheppard surmised that since he wasn’t too keen on using social media or to quickly post his own highlight reels coupled with playing at a lesser-known high school program may have quieted his recruitment. Gonzales theorized that since the signing period timeframe has shifted so much in recent years that most programs had their recruiting classes written in ink while Sheppard was turning heads in the fall of ’19.

But then Devin Fitzsimmons, Vanderbilt’s special teams coordinator and tight ends coach in 2019, caught wind of Sheppard’s success. Fitzsimmons also happened to be teammates with Gonzales at Covington High School in Louisiana.

Soon enough Vandy had offered Sheppard a scholarship. He committed in December of 2019 and signed in February of 2020.

“Will is one of the most physically gifted wide receivers I’ve ever coached,” Gonzales said. “I tell people all the time he was the most-dominant person at that position that I had ever seen in high school. He could do things body-control wise and his ball skills that were just off the charts. His hands are enormous, he has extremely long limbs and he’s exceptionally strong for a person of his stature.”

Waiting in the Wings

Adjusting from high school ball to college is difficult for most any football player. Doing so in the midst of a pandemic while facing SEC opponents every week is another challenge altogether.

“It was definitely an experience,” Sheppard said of the 2020 season. “I didn’t really get the full game day experience because there were no fans, but getting to experience playing better competition and all that I was just learning from older guys and coaches

Sheppard was used sparingly in Vandy’s first six games of 2020. Finally, on Nov. 21, he made his first career reception against Florida – an eye-opening grab that went for 24 yards. He would make just one more reception (the following week) and ended the campaign with two grabs for 30 yards.

When Clark Lea became the program’s head coach in December, Sheppard made it known he wanted to more a part of the Commodores’ plans moving forward.

“The challenge to him was just, ‘Then earn it. Go out and compete for it.’ He’s done that,” Lea said. “He did that through the winter and spring. I thought he grew a bunch just from spring to summer. Loved the summer he had training, getting himself physically prepared, mentally prepared to play. You’ve seen the aggregate of that work come through in his success this fall.”

Sheppard has made at least four receptions in each game this season – save for the matchup against No. 2 Georgia in which everyone on the Vanderbilt offense was completely shut down. The 6-foot-3, 200-pounder is now averaging 10.7 yards per reception and is leading the Commodores with 27 catches. 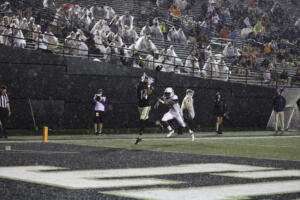 “There’s more for him. He’s got fundamental, technical aspects of his game that he can clean up – the ability to beat the press at the line of scrimmage and stack routes down the field,” Lea said. “I think as the year goes on and he gets more experience and gets coached we’ll see his performance sharpen. In the meantime he’s found a level of production that has helped us win games. We have to keep that rhythm because there’s a chemistry developing that’s going to be beneficial to us.

“I’m proud of Will. Proud of the distance he’s covered to this point. But I’m excited about where we can get with him through to the end of the season.”

Willie Sheppard was a star running back in high school. He attended Louisiana Tech on a football scholarship where he started his career at cornerback, moved back to running back and then returned to cornerback again. He became a leader and standout for the Bulldogs at the turn of the century.

Rebekah Boyd, now the assistant director for the Fallen Lineman Organization which memorializes fallen electrical workers, was a standout volleyball player for Louisiana Tech during the same time as the elder Sheppard.

They’ve raised a stoic, determined son who is blossoming before their eyes.

“I’m not surprised,” Willie Sheppard said of his son’s recent success. “You talk about a kid who I’ve seen his whole life who not only has tremendous athletic ability, but he has had some of the more-important things in terms of the drive, the passion and the focus from an early age.

“He’s a little more of an introvert. He’s not much of a verbal guy. But you could see at a very early age he was a sponge. One of my favorite things about him is he’s always listening. He may not always use your advice, but he listens and he processes. He’s always been a self-driven kid and he’s always been coachable.”

The younger Sheppard, who also averaged 19.4 points, 10.4 rebounds, 2.6 assists and 1.6 steals in 27 games on the basketball court as a senior, has yet to declare a major at Vanderbilt but said he’s leaning toward human and organizational development. He also credited his parents and grandparents for molding him into the young man he is today.

Now, as fate would have it, Sheppard heads back to the state where he spent much of his childhood to face the team he made his first career catch against – he and the Commodores (2-3, 0-1 SEC) face No. 20 Florida (3-2, 1-2 SEC) at 11 a.m. CT Saturday. And while Sheppard admitted he has much more room to improve when it comes to his technique and his knowledge of the game, there’s no denying the young receiver is on the right path.

And his future certainly seems bright.