NASHVILLE, Tenn. — Vanderbilt has had golf teams capable of winning a national title in seasons past. It has certainly had the talent and the ability to go toe-to-toe with the nation’s best.

But perhaps never before have the Commodores been this hot, this consistent and this confident going into the NCAA Championships.

“We’ve had a good spring. We all mingle well together, we know the heater that we’re on right now — and I feel like we can ride that going into this tournament,” senior Reid Davenport said. “We know what we need to do. It’s just execution right now.”

Davenport and his teammates tee off Friday in Scottsdale, Arizona, looking to do something no Vandy men’s golf team has done: win a national championship. And their belief and trust in themselves and in each other increase the odds in their favor.

Vanderbilt has six victories — all since Feb. 21 — and has generally blown away the competition in all but one event on the schedule. And even that was a second-place finish in Georgia in March.

Since then have come triumphs at the Mason Rudolph Championship, Mossy Oak Collegiate Championship, SEC Championships (in stroke and match play) and the NCAA Palm Beach Regional. It’s been more than two months since the Commodores haven’t hoisted a trophy.

“We’ve had the best spring that we’ve ever had here. Just a lot of credit to our guys,” Vandy’s veteran head coach Scott Limbaugh said. “We’ve had three guys that have played with a tremendous amount of consistency when you look at Cole Sherwood and Gordon Sargent and Reid Davenport. They’ve played as good of golf as we’ve ever had played here, and they’ve done it together.

The aforementioned trio has lifted Vanderbilt to some unprecedented heights in the past four months.

Davenport had six top 10 finishes and 15 rounds under par and played with a calming and consistent demeanor to become the team’s quiet and stoic leader. In the last five events, the senior from Austin, Texas, has finished twice second and third once.

Sargent, the SEC’s Freshman of the Year, hasn’t crumpled under the pressure of being one of the nation’s highest-ranked recruits for the 2021–22 season. The Alabaman has only one result outside the top 10, has finished no worst than fifth in his last five events and won the Mossy Oak for his first collegiate triumph.

And there is Sherwood. For a raw prospect who admitted he was a bit lost when it came to practice and routine during his freshman season, Sherwood has exploded onto the scene as a sophomore by winning twice and setting Vandy records along the way.

Sherwood, also from Austin, didn’t hesitate when asked if this team can indeed make history this week in Arizona.

“We can,” he said. “I feel like this spring we’ve kind of learned how to win. We’ve gotten some leads early and we’ve held them late, so I believe we have the talent, we have the grit to win a championship.”

Of course, nothing that Vanderbilt has done to this point will make the competition just step out of the way at the Grayhawk Golf Club.

Oklahoma, ranked No. 1 in the nation, and Oklahoma State, ranked second, will be playing alongside the Commodores (ranked third) on Friday and Saturday. Defending national champion Pepperdine and heavy-hitters Arizona State, North Carolina, Texas, Texas Tech and Florida are among the 30 teams in the impressive field.

They will all try to survive 54 holes of stroke play before half the teams are sent home. On Monday, after 18 more holes, only eight teams earn the right to begin match play Tuesday and, possibly, Wednesday.

“It is a grind, for lack of a better word,” Limbaugh said. “What we always talk about is knowing we can’t skip any steps. It started last week at regionals, and you’ve just really got to lock in. There’s a three-round step and a four-round step and, if you’re fortunate to get to that final step of match play, then there’s step-by-step there.

“The teams that really can lock in and be where their feet are—not look forward, just be fully present with what we’re doing each day—I really think those are the teams that have the most success.”

One advantage the Commodores have is that Davenport, Sherwood and William Moll played the event in 2021. Sargent and veteran Harrison Ott have tackled the par 70, 7,289-yard course before as well.

That, coupled with a historic run that has included conquering a California sandstorm, defending home turf and dominating the SEC and a Regional tournament for a second straight year, has the Dores flying high heading into the first week of June.

“It’s the players’ time of year. You’re going to go make this story—it’s your ending, you’re going to get to write it,” Limbaugh said. “You got full control of that, and we’ve got to go have fun.” 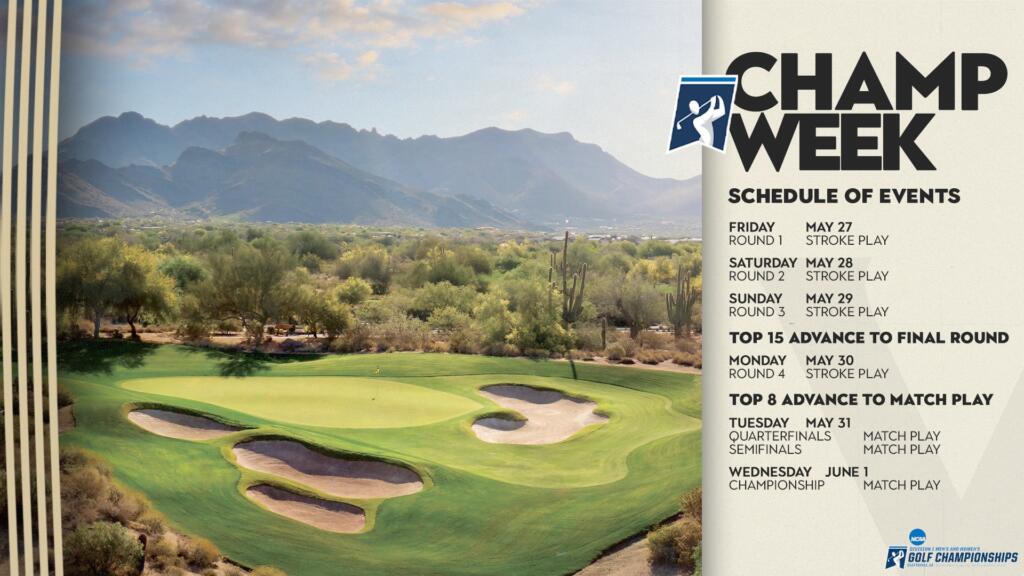