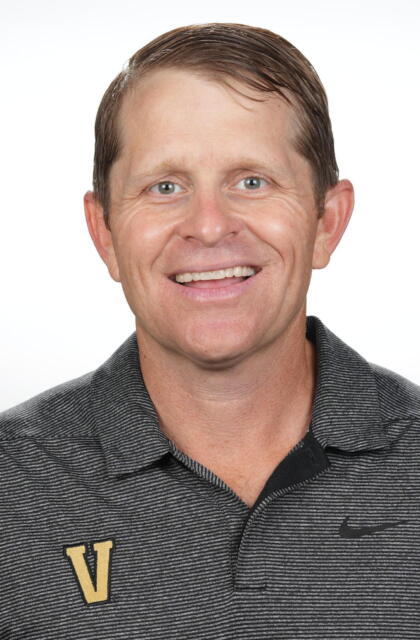 Thomas F. Roush, M.D. and Family Men’s Golf Head Coach Scott Limbaugh has lifted the Vanderbilt golf program to new and unprecedented heights in his 10 seasons, including the 2021-22 campaign which was the best season in Vanderbilt men’s golf history.

Limbaugh was a Dave Williams National Coach of the Year finalist and the SEC Coach of the Year during the ’21-22 season. He led the Commodores to a second straight SEC title, coached four All-Americans and two first-team All-Americans (the first time that had happened in Vanderbilt golf history) and the team’s 133-2 record during the spring marked one of the best runs in collegiate golf history.

The Commodores also reached the semifinals of the NCAA Championships, won the Palm Beach Regional and finished first in stroke play at the SEC Championships.

The 2020-21 season saw Limbaugh named the Southeastern Conference Coach of the Year – the third time in five years Limbaugh has been bestowed the honor. Vandy, under Limbaugh’s guidance, beat Tennessee, Alabama and Arkansas, respectively, in match play to win the 2021 SEC championship on St. Simons Island.

In Kingston Springs at the Golf Club of Tennessee, Limbaugh led Vanderbilt to its first NCAA Regional championship in program history. The Commodores shot a three-round total of 834 (-11) to finish 11 strokes ahead of Arkansas

Vandy advanced to the 2021 Elite Eight at the Grayhawk Golf Club in Scottsdale, Arizona, marking the fifth time in six years under Limbaugh that the Dores advanced to that stage of the NCAA Tournament. Vanderbilt finished ranked inside the top 10 nationally for the seventh season in a row.

Limbaugh also signed the nation’s No. 1 recruiting class ahead of the 2021-22 season by adding Gordon Sargent and Jackson Van Paris.

Since his arrival prior to the 2012 campaign, Limbaugh has established himself as one of the nation’s preeminent coaches. He has mentored six first-team All-Americans, nine Palmer Cup selections, a Walker Cup member and 20 All-America selections all while garnering seven consecutive NCAA Regional bids and six consecutive NCAA Championship appearances from 2014-19 for the first time in program history.

He has also had three of his players participate in a PGA Tour event while still a member of the Commodores: Hunter Stewart in 2014 at the RBC Heritage, Matthias Schwab at the Arnold Palmer Invitational in 2017 and John Augenstein at the 2019 RBC Heritage.

In 2018, he was selected as a co-head coach of the 2019 United States Palmer Cup Team where a record-tying three Commodores were named to the team (John Augenstein, Will Gordon, Patrick Martin). In the spring of 2019, he added his second SEC Coach of the Year honor. He was also named the GCAA Southeast Region Coach of the Year in the coronavirus-shortened 2019-20 campaign.

The 2019-20 season, which was cut short in March of 2020 due the COVID-19 pandemic, featured senior John Augenstein, a first-team All-America and the SEC Player of the Year. Augenstein finished the season second overall in the Golfstat.com rankings and finished as a finalist for the Haskins Award and the Hogan Award.

Vanderbilt claimed one team title, the Desert Mountain Intercollegiate, by 24 strokes and Augenstein won the individual championship after leading wire-to-wire. After competing in the Carmel Cup to begin the season without Augenstein because of his commitment to the Walker Cup, Vanderbilt finished in the top five in their last seven tournaments of the season.

The 2018-19 Commodores featured the best regular-season stroke-average season in Vanderbilt history from Will Gordon and three team tournament titles (Tavistock Collegiate Championship, Florida Gators Invitational, Mason Rudolph Championship) and two individual championships. Vanderbilt was selected as the number one seed for a NCAA Regional for the third consecutive season and the fourth time in five years when they were named the number one seed in the Athens, Georgia regional.

They finished the Athens Regional with a third-place finish and their sixth consecutive trip to the NCAA Championships. In Fayetteville, Arkansas, at the NCAA Championships, the Commodores finished second in stroke play and made the Final Four for the second time in his tenure in match play. After the season concluded, Limbaugh also served as a United States co-head coach at the 2019 Palmer Cup in Little Rock, Arkansas.,

The 2017-18 campaign built on past successes with the Commodores claiming four team titles — at the nationally televised East Lake Cup, SunTrust Gator Invitational, Schenkel Invitational and the Mason Rudolph Championship — while three different Vanderbilt players, John Augenstein, Will Gordon, and Theo Humphrey, have captured individual titles. The Commodores were the No. 1 seed at the SEC Championship for the second consecutive season and Humphrey (Player of the Year, All-SEC first team), Gordon (All-SEC first team), Augenstein (All-SEC second team) and Patrick Martin (All-SEC second team) were honored by the league’s coaches.

The 2016-17 season once again produced numerous firsts for the Vanderbilt program. The Dores captured the SEC Championship for the first time in program history under a new revamped format in Sea Island, Georgia.

The Commodores won the stroke play portion of the tournament by six shots and then won three dramatic match-play victories against Ole Miss, Florida and Texas A&M to win the tournament. Matthias Schwab claimed the victory over Ole Miss with a clutch putt on the 18th to defeat the Rebels while Augenstein clinched the wins over the Gators and Aggies in extra holes with Augenstein winning the Florida match with a decisive 10-foot putt on the 20th hole.

At the 2017 NCAA Championship, Vanderbilt won the stroke-play portion of the tournament by 12 shots and advanced to the Final Four for the first time in the program’s history. The Commodores’ appearance in match play in 2017 marked the third consecutive year Vanderbilt has appeared in the format, the only team in the SEC to accomplish the feat.

Vanderbilt also won the prestigious Nike Collegiate Invitational at world-renowned Colonial Country Club in Forth Worth, Texas, and knocked off a number of nationally-ranked teams in the process. In 2017, Patrick Martin and Schwab earned First-Team All-SEC honors, Humphrey landed on the All-SEC Second Team and Augenstein became Vanderbilt’s first SEC Freshman of the Year honoree.

Vanderbilt finished in second at the NCAA Franklin Regional held at the Vanderbilt Legends Club’s North Course, a finish which included a final-round 20-under par, 268, the team’s lowest round of the season and tied for the second-lowest round in program history. At the NCAA Championship in Eugene, Oregon, Limbaugh’s Commodores finished in a tie for fourth in the four-round stroke play and advanced to match play for the second time in two years, the only two years in the program’s history the team has advanced to match play.

In 2014-15, Vanderbilt had one of the most successful seasons in the history of the program with Stewart leading the way by winning the SEC Player of the Year — the second by a Commodore men’s golfer — and being named as a First-Team All-SEC selection and a First-Team All-American. He also ended the season as the No. 1 ranked golfer in the nation according to Golfstat and he became the Commodores’ first-ever Walker Cup member in August of 2015.

Schwab and Stewart, who each played in the Palmer Cup in 2015, were named recipients of the Michael Carter Award which is presented to the Palmer Cup participant that best represents the qualities and ideals sportsmanship, integrity and upholding of the game.

Carson Jacobs was named to the All-SEC Second Team and Humphrey to the All-SEC Freshman Team. The 2014-15 season marked the most selections to the All-America and All-SEC teams in the history of the program.

The Commodores also made a splash at the 2015 NCAA Championship, finishing second in stroke play competition before falling in the quarterfinals of match play to eventual national champion LSU in their first-ever appearance in the Elite Eight. The exploits of the 2014-15 season earned Limbaugh a spot among the nation’s top collegiate coaches when he was named one of five finalists for the Dave Williams National Coach of the Year in the spring of 2015.

Twelve of the top 15 single-season stroke averages in the history of the program have been with Limbaugh at the helm. Six of the top 10 all-time scoring averages have come with Limbaugh as the head coach with Schwab’s 70.81 career average leading the way.

“I believe that Vanderbilt is a special place and we can build champions on and off the golf course,” Limbaugh said shortly after arriving at Vanderbilt. “There are many things that attracted me to Vanderbilt: First of all, Vanderbilt is a great university and Nashville is such an awesome location.

“We will have the opportunity to build champions in the classroom, on the golf course and have young people that represent Vanderbilt in a way that Vanderbilt needs to be represented.”

Individually, Limbaugh has helped mentor 24 All-Americans on the course with eight of those being first-team selections (Michael Thompson, 2008; Bud Cauley, 2009, 2010, 2011; Justin Thomas, 2012; Hunter Stewart, 2015; Matthias Schwab, 2015, 2016; Patrick Martin, 2017; Theo Humphrey, 2018; Will Gordon, 2019). Thomas, who was recruited by Limbaugh, claimed the prestigious Jack Nicklaus and Phil Mickelson awards while also earning SEC Player of the Year and SEC Freshman of the Year honors.

Off the course and in the classroom, Limbaugh also helped recruit and tutor some of the nation’s best. In 2012, he coached the NCAA Elite 89 winner in Whitsett and, in 2008, Joeseph Sykora claimed the H. Boyd McWhorter SEC Student-Athlete of the Year honor. In all, Limbaugh has coached 87 Academic All-SEC selections and eight Golf Coaches Association of America (GCAA) All-America Scholar members.

As a golfer at Huntingdon, he competed at nationals and was team captain in 2002. After his playing career was over, Limbaugh was hired as an assistant coach at his alma mater and was elevated to head coach in June of 2004 where he served until Alabama hired him as an assistant in 2007.

Limbaugh, a Childersburg, Alabama, native, was the 2005-06 Eaton/Golf Pride South Region NCAA Division III Coach of the Year. He coached Huntingdon to a fourth-place NCAA Division III men’s golf finish in 2007 which was its best finish in school history.

It was Huntingdon’s third straight NCAA appearance as Limbaugh’s teams qualified in all three of his seasons as head coach. His first Huntingdon team in 2005 finished ninth before the 2006 team finished 15th. His 2006 team was ranked No. 1 for almost the entire season in Division III.

Limbaugh produced three All-Americans during his time at Huntingdon, including Alex Balog, Jacob Collinsworth and Matt Mahanic. Collinsworth was a first-team selection after finishing second individually at the NCAA Division III Championships.

Limbaugh and his wife Kate have two daughters, Malley and Annie, and one son, Thomas.

What Others Said About Limbaugh

“Scott Limbaugh has an infectious attitude and is a tireless recruiter. I look forward to getting to know him even better and know he is the coach that will bring Vanderbilt golf back to relevance on the national level. We have found the right man for the job.”

“In my career, we’ve played with Alabama, and I think with coach Limbaugh you’re getting a guy with a lot of energy who’s going to put 110 percent behind the program. That type of energy is what really is going to benefit our program and take it to where we all want it to go. With coach Limbaugh, he’s going to bring out every ounce of potential in all of the guys.”

“Coach Limbaugh has been an unbelievable influence on me and our team. He is a great coach. He brings so much energy to his job and that translates to our team. Coach always had a positive approach to everything we did. He is going to be missed, but all of us are very happy for the opportunity that he is getting at Vanderbilt. He is so driven and determined and I think he will do a great job in Nashville.”

– Justin Thomas, 2012 SEC Freshman and Player of the Year, University of Alabama