NASHVILLE, Tenn. — As Enrique Bradfield’s second season inches toward a close this month, the sensational sophomore has cemented his position as one of the greatest base stealers in Vanderbilt baseball history — and he is likely on his way to the top spots for individual season and career total.

“I’m not afraid of getting caught or thrown out by anybody,” Bradfield recently told The Associated Press.

The Commodores (36-21) face San Diego (36-18) at 3 p.m. CT Friday in the Corvallis Regional needing to conquer the Toreros, Oregon State and New Mexico to advance to a Super Regional.

Bob Schabes and Charles DeFrance are the men ahead of the Bradfield in the record books. Both are watching and both are cheering on Vandy’s incomparable leadoff hitter.

How DeFrance Came to Dominate

It’s a tale that probably deserves its own full-length book.

DeFrance barely played high school baseball. He was a basketball player and drum major who worked with the baseball team mostly as a bat boy until the final weeks of his senior year. A teammate quit, opening a spot on the roster.

Then, as a freshman at Park College (now Park University), DeFrance joined the club team for fun. The Kansas City Royals ran an academy for prospects at the time and got wind of the local standout. They approached DeFrance about an opportunity to develop his game as a second baseman. 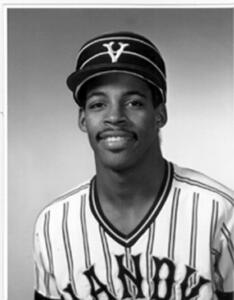 With more of a foundation on the diamond, DeFrance (BS’82) enrolled at Jackson Junior College (Michigan), where his baseball education revved up a notch and fate stepped in. His team took two separate trips to Florida to play more than a dozen games, and toward the end of the second leg DeFrance broke his hand sliding into a base.

So for the rest of the season DeFrance served as a pinch runner. His impact on the game in that role drew the interest of Vanderbilt, Georgia Tech and Austin Peay — all of whom offered him scholarships.

“I ended up at Vandy with very little baseball experience — nobody really knew that,” DeFrance laughed.

Under the tutelage of Roy Mewbourne, DeFrance began his career as a Commodore in 1980. He went 17 for 20 stealing bases that year, a number hindered by the fact that All-American Scotti Madison batted behind him in the lineup — if DeFrance was on first and stole second, Madison would get intentionally walked.

Over the next two seasons, DeFrance stole 80 bases to finish his career with 96 swipes.

“I don’t think you can understand what it’s like for everybody in the stadium to know you’re going to steal the base,” DeFrance said. “It’s a cat-and-mouse game that you play with the pitcher and the catcher and the other team. You become the catalyst to your team’s success just from your ability to steal bases. That pressure in that moment — sometimes I’ve seen (Bradfield) smile or laugh when he gets back to first or takes those big leads — I really relate to that pressure.

“It’s an unbelievable amount of pressure internally, but you enjoy it. You enjoy the challenge of doing that. You know you’re going to put so much pressure (on the catchers) that the throw has to be perfect.” 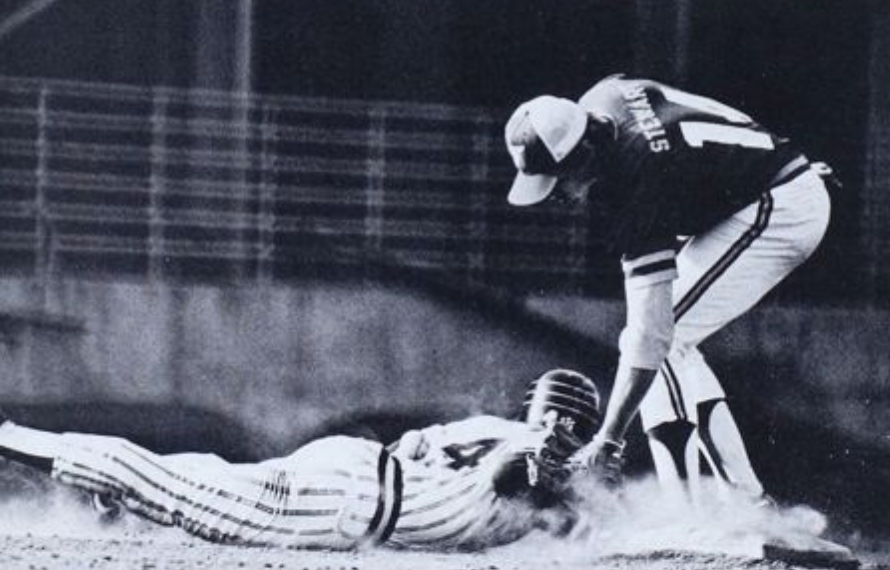 Just seven seasons after DeFrance played his last game at Vanderbilt, Schabes began his own journey into the university’s record books. 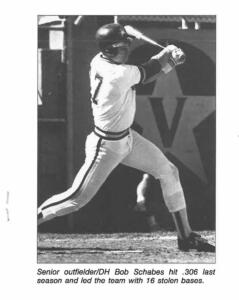 “I had the stolen base race sort of in my mind the whole season,” Schabes told VUCommodores.com in 2021. “I knew that I was chasing Joey Cora’s record, which was 42. Coach Mewbourne had given me the green light to steal whenever I could, unless we were winning by too many runs. I learned some tricks about how to steal signs, and I studied pitchers really, really carefully to learn which ones I could steal on and how to take breaks and get good jumps. Had a really fun season doing that.

“It’s a year that I remember very fondly for the team experience, for the camaraderie with my teammates, and I’m very proud of it personally for having been there, having played in that program. Nowdays I’m really proud to say that I played ball at Vandy.”

Now residing in Tampa, Schabes (BA’89) had fallen into the habit of not glancing at Vanderbilt’s season stats. Usually the team’s leader in stolen bases rarely had more than 20 by about this time every year.

Last year he checked, though, and he admitted to being a bit nervous when he saw a freshman by the name of Bradfield was already into the 40s. Bradfield, who wears No. 51, finished the season with 47 stolen bases.

“Of course I want to express that I would love to see someone do it and it would be exciting,” Schabes said of the possibility of his record being broken. “I didn’t have the benefit of the postseason, unfortunately. Our team wasn’t as good as the team is these years.”

Schabes, who hit a team-leading .352 as a senior with 36 RBIs as a designated hitter and outfielder, hung up his cleats in 1989 after stealing 51 bases in 52 games. He turned to the family business, where he started in equipment distribution before transitioning into finance. He’s now the president of the Independent Savings Plan Company and co-founder of The LeverEdge.

For about 25 years, Schabes said, he didn’t even think to check on his own Vanderbilt baseball record.

“I was a little bit shocked to see that that record was still standing,” he said.

DeFrance never left Vanderbilt and today is the director of safety and security for the Vanderbilt Medical Center. He tries to attend as many games in person as he can, and he was able to personally speak to Bradfield when the Commodores returned to Nashville from the College World Series in 2021.

Since then, DeFrance said, he has been low-key while watching Bradfield do his thing. Now he’s rooting extra hard for the kid to reach those milestone numbers.

“I am his No. 1 fan. I have been cheering for him to do it in two years,” DeFrance said. “He’s well deserving, and he is incredible to be able to do that under the pressure.”